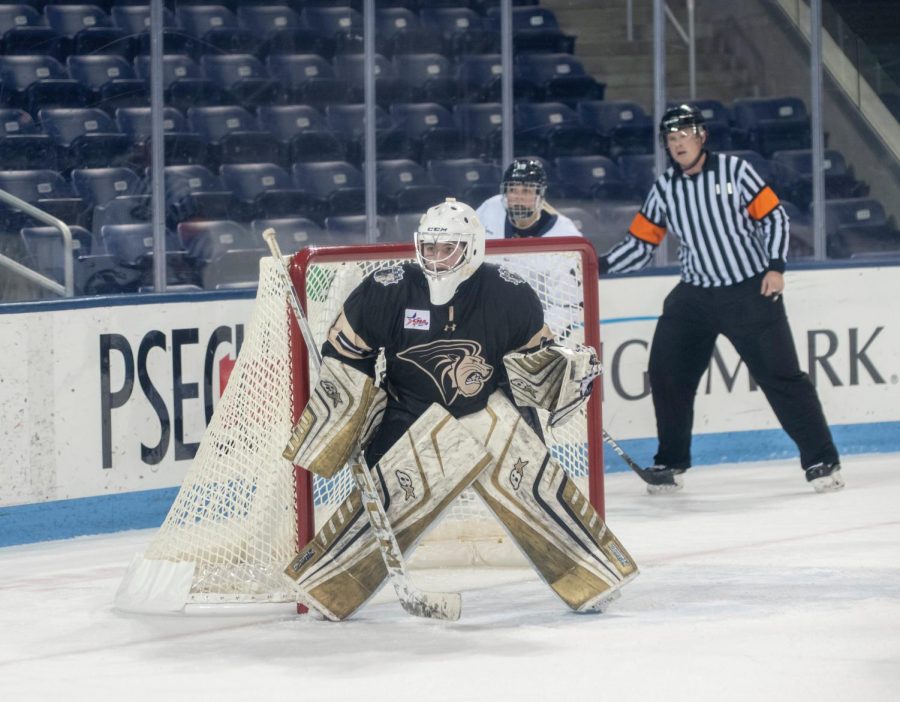 Compared to last season, their schedule now has been reduced dramatically. For this program, a typical regular season consists of about 30 games on average. Due to COVID-19 restrictions, all that the roster is left with is a slim, six-game format against only Penn State and Robert Morris University.

The last time the team had played in an official game was all the way back on March 5. They were taken down by Syracuse University in the CHA postseason tournament, just weeks before national collegiate shutdowns began taking place.

In spite of everything going on in the world today, junior goaltender Annika Asplundh is just grateful to be back playing hockey with her teammates.

The goalie has taken a leap this season: allowing only two goals per game, saving 101 shots, along with currently holding a .944 save percentage.

Q: Going into your junior season, what improvements do you feel you have made as a goalie since last year?

A: “Going into this season, I have a lot more confidence in myself. I also have more patience and a higher level of composure and mental toughness. I have developed more awareness of plays that are happening as well as the positioning of players, which helps my ability to read and react quickly.”

Q: The offseason was a little longer than expected. How are you and the girls doing mentally with everyone going on?

A: “We are staying positive and keeping an open mind as we take one day at a time. We are focusing on what we can control to make improvements both individually and as a team.”

Q: From a physical point-of-view, what did you and your team’s training regimen look like in preparation for this season?

A: “To prepare for this season our training regimen consisted of 4-5 on ice practices a week. In addition to on ice practices, we had team lifts three times a week as well as 1-2 conditioning sessions each week.”

Q: Who or what do you credit for giving you a passion for ice hockey?

A: “I credit my twin brother for giving me a passion for ice hockey. Growing up we played on the same team together, and we would constantly challenge each other.”

A: “I actually have two favorite memories (both from last year). The first one is tying No. 4 Clarkson 1-1, and the second one is the weekend sweep of RIT with back-to-back shutouts.

Q: You guys just finished playing back-to-back games vs. Penn State, how do you feel you performed in both of those contests?

A: “I feel like I performed pretty well, especially for it being my first time playing a game in about 8 months. I was able to find my rhythm and adjust to the speed of the game.”

Q: What are some positives you think the team can take away from both of these games?

A: “I think some positives we can take away are that we were able to get our first games under us and be able to establish some team and line chemistry. We can build off of the energy from playing those games and our ability to make adjustments for special teams.”

Q: Individual goals for the rest of the season?

A: “Some of my goals are to build off of my confidence and continue to stay consistent with my game.”

Q: What’s the team outlook going into the final four games of the year vs. Robert Morris?

A: “We are excited to have the opportunity to play. We are looking to continue to establish our team and line chemistry as well as to focus on playing three consistent periods. We also want to limit the amount of penalties we take as a team and use our speed to create scoring chances.”