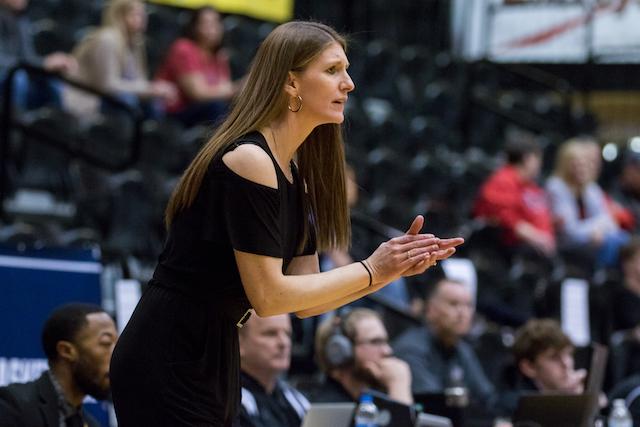 Coach Katie Falco's journey to Lindenwood University took her through Montana State and South Dakota State, where she served as an assistant coach.
Photo provided by Lindenwood Athletics

Since the addition of head coach Katie Falco at the start of the 2018-2019 season, the women’s basketball team has become accustomed to winning ways.

Lindenwood boasted a 21-8 record in Falco’s first season and a 19-9 record last season before COVID-19 forced the cancellation of the Lions’ second consecutive appearance in the NCAA Division-II National Championship tournament.

In a typical season, there would be a preseason for exhibition games to allow adequate time and game experience for players to become adjusted to new players, schemes and offensive and defensive game plans.

“When you start the season, you start ready to go,” Falco said. “Without having the opportunities to play scrimmages and exhibitions, you don’t have anyone to play against. You just see yourselves for every day. That’s the hardest thing. You get used to each other’s tendencies and that’s the value that the preseason brings. You get the nerves out.”

Instead of those valuable scrimmages, the Lions started their regular season against Drury University; a team they’ve never beaten in their prior four attempts and one who was in first place last season before the COVID cancellations. In that game, the Lions lost 110-69, including losing the fourth quarter 33-6.

“We’re playing teams that know us really well within the conference,” Falco said. “But it’s good that we’re able to be evaluated this early and quickly, learn from it and grow from it and attack the next game.”

To follow that season opening loss, the Lions traveled to Maryville University, where a back-and-forth game was a one-point game at the start of the fourth quarter. In that final quarter, the Lions were outscored 23-12 to lose 79-67. After starting 0-2, the Lions rallied behind Julia Ruzevich’s 17 points and 12 rebounds to defeat Quincy University 67-41.

After three games, Ruzevich is averaging 23 points and 13.7 rebounds per game, while shooting 53% from the field and 56% from the three-point line. For her play in the first week of games, Ruzevich was selected as the Great Lakes Valley Conference Player of the Week.

The rise in play from Ruzevich is much-needed for this Lions program, with record-setting players Kallie Bildner and Lindsay Medlen having graduated last year.

“She’s put the team on her back over the first few games,” Falco said. “Her presence is incredible. Her ability to play inside and outside is difficult for opposing teams. She’s a big, strong, athletic kid who can run vertically and laterally. She’s versatile.”

Julia, along with her twin sister Kate, was on her third school in three years when she first came to Lindenwood last year. Falco noted that this year has seen a change in Julia’s confidence and familiarity within the program. The confidence is a noticeable change given how successful Julia has been shooting from distance this season.

Another veteran returner from last season is guard Hennessey Handy, who only played nine games last season before she suffered a torn ACL in her right knee.

“Her return to play was really fast. I love that about her. She gets to work and does what she needs to,” Falco said. “She’s great, but I think she has another gear she can get to, which she will as she gets those game reps.”

In 25 minutes per game, Handy is averaging 11 points and five rebounds per game this season, including an 18-point performance in the season opening loss to Drury University.

“Similar to Julia, she’s versatile, she’s athletic, strong, physical. She can really do some things athletically that separates her from others,” Falco said.

When talking about the preseason games and scrimmages, Falco said Handy would’ve benefitted the most from the extra reps, given the fact that Handy missed the entire second half of last season and spent the spring and summer months rehabbing her right knee, which was the second ACL tear of her college basketball career.

“I’m excited about the growth of this team,” Falco said. “My expectations are really high, and the players know that. We’re a program that expects to win.

The Lions start a two-game homestand on Dec. 10 against Missouri S&T, followed by Truman State University on Dec. 12.