No. 14 Men’s Lacrosse looks to have another strong season after shortened 2020 campaign 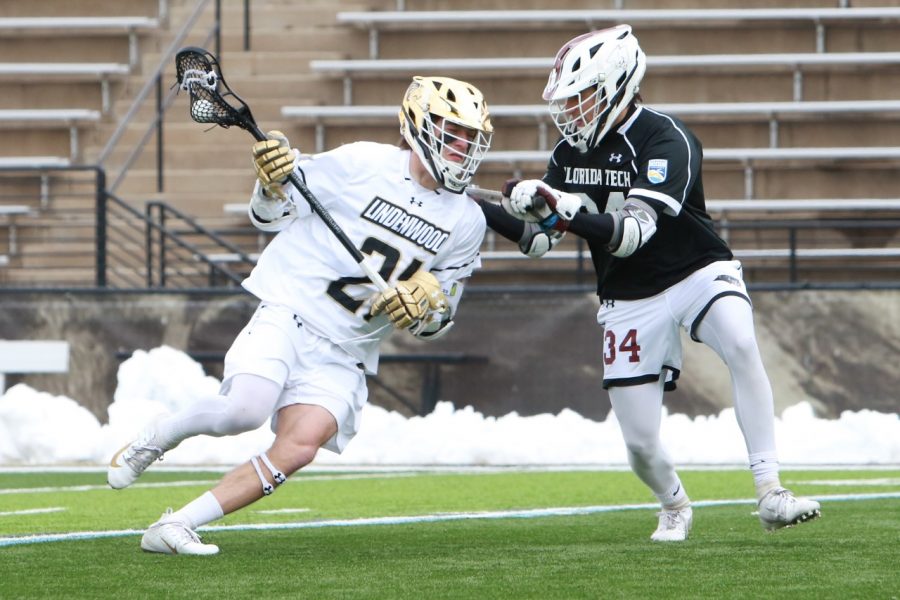 It has been 333 days since their last game, but men’s lacrosse will finally take the field again on Saturday against Quincy University.

“I can tell you right now that it has been such a long journey the past 300 plus days,” senior Carter Collins said. “It’s been tough for all of us to not play for so long, but we are very excited to come out and finally battle with each other and show the country who we really are.”

The strong start led to a ranking as high as No. 14 in the nation before the season came to an abrupt end due to COVID-19.

“It was a tough pill to swallow,” head coach Jim Lange said. “We were hot at that point in time. We had outscored our opponents 88 to 44, so we were doubling up a lot of teams.”

Collins and the rest of the Lions roster were also hit hard by the early end to the season.

“It was such an odd and unexpected event that really did hurt, not only on the lacrosse field but off as well,” Collins said. “The hardest part was not being able to finish what we started and not being able to prove to everyone who we are as a team.”

Now with the shortened 2020 season in the rear-view mirror, the Lions once again are ranked No. 14 heading into the season opener against the Hawks. The ranking isn’t the only thing similar to last year, however, as the team is returning a majority of its roster.

“There was a lot of unfinished business with our guys,” Lange said. “We returned most of them, a good amount of our seniors returned to use the extra year the NCAA granted them.”

Key veteran returners include redshirt senior Leonard Jones and junior Peter Covington in attack, last year’s team leaders in points. Covington was second in goals (14), while Jones had 11 goals with nine assists, the second most on the team.

“He’s [Jones] a problem for other teams to cover,” Lange said. “He’s going to take a lot of responsibility off other guys on the field by being a center of attention for other teams.”

Another impact player who is returning is Collins, who Lange had high praise for.

“Carter Collins is one of the best midfielders in the country,” Lange said. “He’s gonna draw their best defensemen up at midfield in every game.”

In his junior campaign, Collins tallied 10 goals and five assists on a team-high 43 shots, 18 of them being on goal.

But for Collins, it isn’t about the numbers he puts up.

“I don’t pay much attention to individual statistics because that’s not what is important to me,” Collins said. “What makes me successful and look good on the field is all of my teammates and coaches’ efforts. I wouldn’t be the player I am without all of their hard work and passion for the game.”

Despite the unique offseason, men’s lacrosse were still to make it a productive one, even if there were many miles separating them. Videos were sent to players during the spring and summer, consisting of workouts that could be done in the living room.

Come summer, players were able to go back to their hometown gyms. By the time they got back to Lindenwood in the fall, the weight-room was open for the team, just in split numbers.

In terms of getting back on the field, men’s lacrosse first had to practice in pods with non-contact drills, including shooting exercises. They were then able to get into contact drills while also increasing the pod sizes from 10 to 12, before finally being able to have full-team practices a week before winter break.

While he understands all of this was a challenge for his team, Lange also knows that Lindenwood isn’t alone.

“It’s been different, but it’s different for everybody,” Lange said. “Most teams in the country are like us or had even less preparation. So that’s what we keep letting the guys know, it’s frustrating for everybody. They’re frustrated, they want to be on the field more but everybody’s dealing with it.”

Lange, entering his eighth season as the team’s head coach, has led the Lions to above .500 finishes in five of the seven years he has been in the role, including their 5-0 season in 2020.

The 2021 schedule consists solely of conference play, as Lindenwood will not play a team outside of the GLVC in the regular season, which runs from Feb. 6 to May 1. The Lions have an even six games at home and six on the road, both starting and finishing at home.

“The guys are ready,” Lange said. “I think things are right where they need to be right now. We keep telling the guys we don’t need to peak right now, we want to start peaking at the end of March, beginning of April when things start to ramp up before the conference tournament starts.”

And while the positive outside attention and ranking is nice, Collins is more concerned with the bigger picture.

“Our team is only focused on us, not the rankings, not the media, and not how other teams are doing,” Collins said. “We control our destiny, no one else.”

The GLVC tournament, which will be held in St. Charles at Lindenwood’s Hunter Stadium, consists of a semifinals round on May 7 and the championship game on May 9.