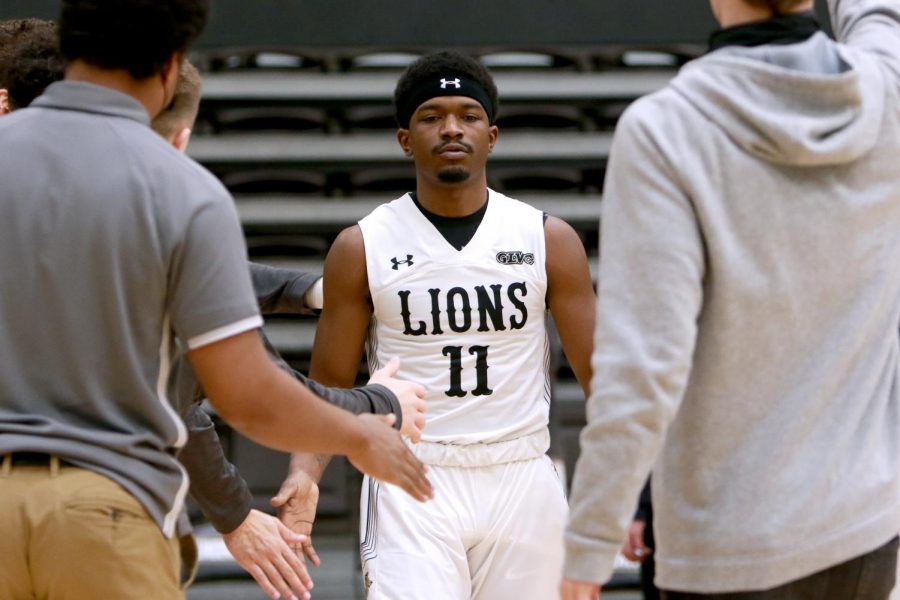 Kevin Caldwell Jr. (#11) gets greeted by members of the men's basketball team during Lindenwood's home victory against Southwest Baptist on Jan. 30.

The future is now, and that future happens to be Kevin Caldwell Jr. for the Lions’ men’s basketball team.

Caldwell is currently a first year junior that transferred to Lindenwood from Southwestern Illinois College, or SWIC. He’s a local guy as a product of Alton, Illinois, about 30 minutes east of campus. Though Alton is known as a quiet river town, every place still has its rough patches.

“When I was growing up in Alton, it was a lot worse than it has been recently,” Caldwell said. “A lot of unnecessary violence and no real purpose to anything. I grew up in a violent part of Alton, so someone else’s view may be totally different than mine.”

The one thing that always did seem to unite the town however, was sports.

“Sports bring everyone together in my eyes. And one thing I take pride in is speaking to the youth of Alton,” Caldwell said. “I had people talking to me growing up but I wasn’t being told all of the right things.

“It’s important to me to send the right message to the young people coming in behind me. Not just in sports but in life.”

Kevin started playing basketball when he was roughly 4-or-5 years old, and likely got the start due to his family’s basketball heritage. His cousin Marlon and his uncle John both played ball for SWIC. His father Kevin Caldwell Sr. played at Southern Indiana under legendary Coach Bruce Pearl, and his uncle Larry was an instrumental piece on an Illinois team that made the Final Four in 1989.

Larry was the sixth man for the Illini’s, who dished out more assists than anyone else on the team with 157 on the ’89 season, averaging 4.4 a game. The magic for Larry would end in the first game of the Final Four as he would fall to the eventual national champion Michigan Wolverines by a single basket.

Kevin would go on to be a three-sport athlete at Alton High as he played basketball, ran the 200 for the track team, and played wide receiver for the Redbirds. Despite Kevin’s talent, he had no immediate looks right out of high school.

“I didn’t have any immediate interest,” Caldwell said.

Caldwell would go on to to play JUCO ball at SWIC, and as an incoming freshman heading into a difficult league needing to fight for playing time and a scholarship to further a playing career, it was important for him to have a mentor. That mentor for Caldwell was Destan Williams.

Destan was a local high school standout at Pattonville High, and in his senior year with the Pirates, the team made the quarterfinals. Destan was always talented enough to go anywhere he wanted, but was merely overlooked because of his height. So he chose to go to SWIC. The two would cross paths when Kevin was 15, as they were apart of the same AAU organization, where even then, Destan was a mentor to the young Caldwell.

“He was a year older than me but he was one of the older guys I always hung around. He respected my game and I respected his,” Caldwell said.

The two would even go on to become roommates.

“We never thought we’d end up playing together in college,” Caldwell said. “He was my roommate at SWIC and he took me under his wing as a freshman. Going against him every day that year made me a better point guard.”

The two still chat, and Destan now plays college ball at Adams State University in Colorado. Williams would help lay the framework for Kevin’s gritty JUCO battle and while tough, the guard said that he was very appreciative for his time there.

“SWIC was tough for me mentally. I had never played for a basketball coach like Jay Harrington and it showed. His system was different for me, but that’s what I needed as a basketball player. He taught me every little thing about basketball and a lot of life lessons,” Caldwell said.

After a solid tenure with the Blue Storm putting up 8.6 points a game, dishing out 2.7 assists a game, and snagging 3.3 boards each game, Lindenwood would send an offer to Caldwell.

In his first year with Lindenwood, Kevin has been a huge factor in the Lions’ success. A reliable guard that currently plays 22 minutes a game, shoots 87% from the line, and averages 8.0 points per game. He’s proven himself to be a clutch shooter and also a problem for offenses, drawing three charges so far this year for Lindenwood. He had no bigger moment this season than his shot against Southwest Baptist.

The Lions, who were 6-7 at the time, had the difficult task of playing an 11-2 Southwest Baptist team. Baptist was favored going into the gamee, beating the Lions in Bolivar earlier this season. It didn’t help that the Lions were down Brandon Suggs, Anthony Christian, and Vijay Blackmon. The Lions surprised the Bearcats by staying in the game, and forcing two overtimes.

Caldwell’s time came during the last possession of the second overtime. T.J. Crockett came down the court, as head coach Kyle Gerdeman was signaling that he wanted to take the final shot in the half and not give the ball back to the Bearcats.

Crockett would pull-up well-defended from the elbow, and miss his shot. Romelo Burrell got the rebound and the put-back opportunity, no good. The ball landed right in the hands of Caldwell, who was directly behind Burrell, and he hit the game winning shot with seconds left on the clock.

“I ended up in the short corner, which is like the last place you want to be as a point guard,” Caldwell said. “I was thinking crash the glass the whole time. When T.J. missed then Melo missed, the ball just came right to me.

“It happened so slow it was crazy I tipped it in and heard the SBU player say ‘bro where did you come from?’ And then I thought defense immediately cause I didn’t know how much time was on the clock.”

The win moved the Lions to sixth in the GLVC as far as ranking, putting the team in a good position to make the postseason tournament.