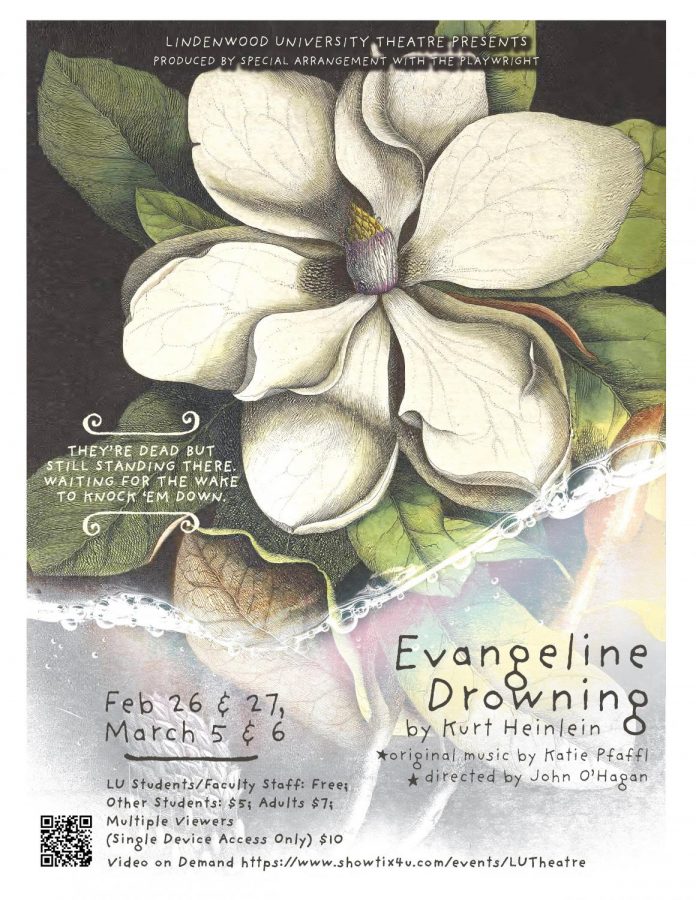 Evangeline Drowning is a riveting drama that uses very personal stories of the young people to help explore the challenges and issues of wetland loss in southern Louisiana.

Theatre Program Chair and Director John O’Hagan said in an email, “This is more than a play. It’s a wake-up call. A call to action.”

Evangeline Drowning is a riveting drama written by Kurt Heinlein that uses very personal stories of the young people to help explore the challenges and issues of wetland loss in southern Louisiana. It tells of the aftermath of the Louisiana hurricanes through the lens of teenage students.

“The show powerfully points out how day-to-day environmental degradation exacerbates the damage caused by significant storms and hurricanes, each of the stories explored in the play is rooted in fact,” O’Hagan said.

O’Hagan said like the proverbial ‘pebble tossed in the pond’, it’s easy to understand the ripple effects that reach far beyond the immediate region, and that there is a very real cost in continuing to turn a blind eye. Everyone has a part to play in correcting the problems.

Lindenwood University has donated a portion of production expenses to the Houma Nation and the Southern Louisiana Wetlands Discovery Center.

Lindenwood’s student drama actor Isabella Jackson has greatly influenced and contributed to this process. Jackson gathered information on the play, the region, and the ongoing efforts to help and prevent physical and cultural losses.

When she shared the information with the play director and the rest of the team, they realized that they could do even more.

“We felt that, in addition to producing the work, we needed to provide whatever we could to support efforts geared toward change,” O’Hagan said.

The production team received support from the administration and multiple campus leaders. O’Hagan wants to encourage others to get involved and believes that no amount of support is too small.

Evangeline Drowning is a unique play in many aspects. One of them is the importance of everybody in the ensemble.

“There really is no lead, no star,” O’Hagan said. “I think that’s important because the subject matter it deals with affects all of us.

“We all need to recognize that the actions we take (or don’t take) have an impact across entire communities. This play drives that awareness home.”

Because of the COVID-19 pandemic, everything looks different: production, rehearsal, and performance. This year, actors are challenged to do their best in creating a connection with the audience through the camera, as it is a big part of the art of theatre.

“Even though they are masked, and you can’t see half of their faces, the heart of the characters, their need to share their stories, their need to engage us – to change us – comes through,” O’Hagan said.

When asked about the experience of the rehearsing process, O’Hagan says how grateful he is for the extraordinary efforts everybody on the team made to make this project successful.

The play can be accessed on March 5-6 by purchasing a video on demand. Tickets are $7 for adults, and free for Lindenwood faculty and staff.