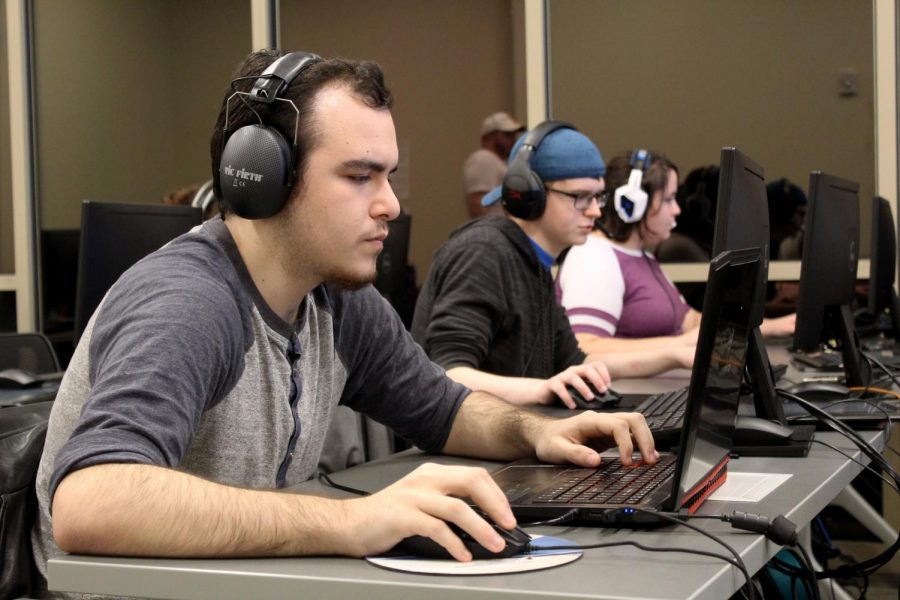 Overwatch players Joshua Coone, Sean Greenwood and Amanda Krsul work together to defeat their opponents from Florida Tech College. Greenwood serves as the in-game lead and analyst on the Overwatch team.

Lindenwood’s esports team is one of the newest additions to campus, and it’s growing quickly.

The program currently has four different teams for Lindenwood students to play on, according to the Esports Director Benjamin Suntrup. The four teams are League of Legends, Rocket League, Overwatch, and Rainbow Six Siege.

These four games are some of the most popular games in the esports community, with almost 285 million players across all games and platforms, according to statista.com.

Suntrup says Lindenwood currently has over 30 students involved in the program across the four teams. Suntrup also mentioned that they have now started internal and external recruiting for the fall 2021 academic year in order to increase those numbers.

There are players of all skill levels involved in the Lindenwood esports program, which is split into two groups: the varsity team and the Community Club.

“Varsity is reserved for our flagship teams competing in our flagship games,” Suntrup said in an email. “The Community Club is a place for anyone interested in video games, especially those with a competitive hunger, to come and play with other Lindenwood students.”

There is a starting and substitute roster for each of the varsity teams, while the Community Club allows people to find other players and compete whenever and wherever they choose.

The players on the varsity teams are the ones that participate in the collegiate tournaments. These tournaments occur during a specified season, just as any other sport does.

Suntrup said that the Lindenwood esports program will have full Rocket League and Rainbow Six Siege teams for the fall 2021 season, along with the Overwatch and League of Legends teams.

In addition to the teams they already have, Suntrup says that the esports program is looking to add a Valorant team to the roster.

“We are looking to create a Valorant team as well. We are actively recruiting for all of the teams from students already at LU and outside of LU,” Suntrup said.

According to Suntrup, the program only had one of the four teams compete in this year’s season.

“The Overwatch team did not get to participate in this season as a few players were not able to play this season and we could not find enough players on campus at the time,” Suntrup said. “The League team finished their season at a record of 3-3 and will be participating in the Teemo Cup soon.”

The Teemo Cup is just one of the many competitions that the esports teams compete in. Even though Lindenwood only had one team compete this season, normally all of the teams would take part in different tournaments.

“We prepare for competitions like any other sport would, with tons of practices and team building exercises,” Suntrup said.

Players on the different teams must spend hours practicing and perfecting their gameplay in order to defeat the other team.

Lindenwood junior Joe Kuhn is a member of the Overwatch team and says that he spends 16 to 20 hours a week playing and practicing Overwatch. For Kuhn, a lot goes into getting ready for each competition.

“I do my individual warmups and then get with my team to do our warmups,” Kuhn said in an email. “A big thing is making sure that my hands are warm and that I’ve eaten and had plenty of water because it can get pretty stressful and I need to make sure that I can be as focused as possible.”

Kuhn says the biggest part of being able to win games is having good communication and good technical skills.

“A large part of the game is communicating with teammates, being able to track ultimates and different cooldowns is important in being able to win a fight,” Kuhn said.

According to Kuhn, Overwatch is one of those games where the winner can change from week to week.

“It comes down to good communication, good game knowledge, and trust in your abilities and those of your teammates,” Kuhn said.

Many of these same things apply to the other games that are played as a part of the Lindenwood esports program. These games rely on teamwork and good game skill in order to be successful as a team.

Coaching is also an important factor to having a good team. Lindenwood’s esports program currently has a top 500 Flex Overwatch player as the head coach in Sean Greenwood.

Greenwood has over 2,500 hours played in Overwatch and started out as a player for the Lindenwood esports program before its official founding.

Suntrup said there are many ways to get involved with the Lindenwood esports program and be able to play competitively. To get involved, students can email him at [email protected] or by following the program’s Twitter page @LULionsEsports.