Players react to football season being called off 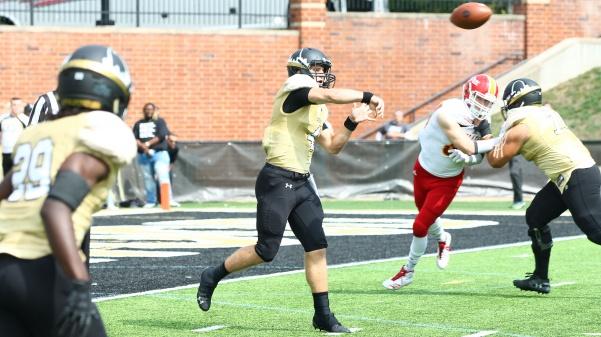 Quarterback Cade Brister throws the ball downfield. He passed for 128 yards and one touchdown.
Photo by Kayla Drake

Nearly 500 days ago, Lindenwood fell in the second round of the Division II playoffs to No. 10 Northwest Missouri State.

They haven’t played a game since. And after last week’s announcement, this will remain the case through the spring after the team opted out of playing in the shortened season.

“I was pretty upset about it just because it was pretty close to the season,” sophomore wide receiver Spencer Redd said. “I hadn’t heard any news about it until that day and after practice, so it was pretty surprising to me.”

While this news caught Redd by surprise, senior running back Nash Sutherlin had a feeling the announcement was on the way.

“I honestly saw it coming, so when it happened I wasn’t as disappointed as some others,” Sutherlin said. “I was upset, but I saw it as another year to develop and get better to win a championship.”

The decision to opt out of the spring season came down to head coach Jed Stugart, the seniors, and the unity council leadership of the team, according to junior quarterback Cade Brister.

Stugart discussed the possibility of calling the season off with the team first, getting feedback from the players before going any further. As a whole, the group determined that this was the best course of action as a program.

A factor that played into this call was that the team wasn’t going to be able to compete for a national championship this spring in the abbreviated season, causing there to be a risk of injury in a year with little to play for.

“The risk was kind of more than the reward,” Brister said. “We really wanted to play. The coaches wanted to get us out there, but at the same time, was that worth some freak accident happening to somebody that we kind of need in the fall.”

As demonstrated by the seniors playing a role in the decision, emphasis was put on the veterans’ thoughts on whether or not to play out the three-game regular season and the postseason. Some had been getting set for what could be their final season and semester at Lindenwood. Not playing this spring means some of those seniors won’t get that opportunity.

Sutherlin, however, will be returning in the fall in what will be his last run at the university. Even though he will be coming back, the news still wasn’t easy to hear for the veteran running back.

“It was hard because I was mentally prepared to be done,” Sutherlin said, “so knowing I had another year kinda sucked, especially knowing I’ll be an old head of the team. Staying positive really helped getting through it.”

On Wednesday, the team had their final main event of the spring as they competed in the spring game at Hunter Stadium, giving players the opportunity to face each other in a game setting.

For the remainder of the semester, Lindenwood will mainly be doing the small things, like mentally preparing through watching film as well as working on timing between the quarterbacks and wide receivers.

Redd said he thinks the rest of the spring should be fun.

“I think we will prepare very well in the spring without these games and it gives people the chance to get even more healthy and more prepared for the fall,” Redd said.

“We’ve had a whole year without real game contact, so our bodies are a little bit more fresh, we’re not as dinged up,” Brister said. “But I just think spending more time with coach [J.C.] Hull is gonna be even more beneficial.

“We’ve been with him all spring- took a little break in our spring ball period, but getting back in the weight room, running, lifting, getting our bodies together a little more is gonna be good.”

Hull, who is currently in his second year at Lindenwood, serves as the team’s athletic performance coach. He was previously the assistant strength coach for the University of Connecticut before coming to St. Charles.

Now, with no more games to be played in the spring, the focus of the team is set on what’s ahead in the fall.

While the road to the fall is and has been a unique one, Sutherlin says that his team isn’t drastically altering how they are preparing for next season.

“As a team, preparation really never changed for us and we’ve been going harder on the field and the weight room,” Sutherlin said, “and it helps us a lot that we have a lot of veterans so practice has been all about executing and perfecting our craft.”

The fall season is scheduled to begin on Sept. 2 at Hunter Stadium in St. Charles, Mo.