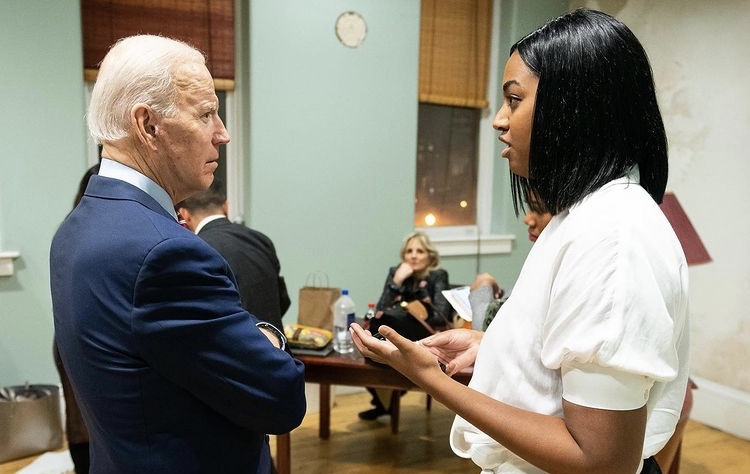 Hill graduated in 2014, and during her freshman year she was on the Lionettes Dance Team. She majored in mass communications with a broadcast emphasis. She said she was mostly involved with LUTV during her time at Lindenwood.

“I spent a lot of time in the studio there, I started out renting out the video equipment for folks who were in different comm classes and then worked my way right up into helping produce and anchor and write for the LUTV news show.”

After graduation, she moved back home to Oklahoma City to become a reporter at an NBC affiliate for a year and a half.

Hill said she always wanted to become a reporter, so it was a dream come true to be able to land a spot in Oklahoma City right after college.

As a reporter, she learned a lot quickly from covering general assignment topics to breaking news and crime to politics.

“It was great to get back there right after college and then report on that community that I grew up in,” Hill said.

After learning the ropes in Oklahoma City, she was ready for a larger market, so she made the move to Nashville where she worked the morning show for almost four years.

Hill said while working the mornings, there weren’t many people at the station, so spending time with her coworkers on the show created a family environment that was a great experience.

After working at the station for a few years, Hill decided to venture into politics after reporting a lot on education-related stories. While working on these stories, she spoke a lot with the mayor of Nashville.

“A lot of that coincided with the former mayor of Nashville, who was a big education mayor, and who created a nonprofit after he left office,” Hill said. “And so you know after a while of working with them on stories, they asked if I was interested in leaving news and I told them that I was open to it.”

Hill said she was ready to make the jump out of news, so she took the opportunity. She worked for former Nashville Mayor Karl Dean in 2018 when he ran for governor.

Hill, who is currently working in D.C., said that work looks a little different at the moment due to the pandemic, but that the work is humbling to do since it directly affects others’ lives.

“In politics I’ve only worked in campaigns rather than governing, Hill said. “And so when you’re messaging around the candidate’s priorities on a campaign it’s hopeful. It gives you a lot of hope of what this person can do, and because of the work that you’ve done to get them elected.

“It’s just a totally different feeling whenever they are actually governing and the communications work that you’re doing is reaching the American people to get them services or health that they need directly.”

Hill said one example of their work directly reaching the American people is from the president’s executive order last month that opened up a special enrollment period for the Affordable Care Act. This helps people who lost jobs or lost insurance due to the pandemic or insurance that was tied to their employment.

“We’re doing a lot of communications work on amplifying to folks that this special enrollment period exists and if they are without interest right now, they can sign up,” Hill said.

She said that it’s different than working on a campaign because there’s a direct cause and effect versus promises and priorities.

“I think a lot of the time the national press has a lot of access to the White House and that press briefing room but our job is to make it more accessible to local news, rather than them having to rely on AP stories or different national affiliate stories,” Hill said. “So a lot of our time is filled with pitching interviews for some of our senior administration officials to go on to local TV stations or to speak with a local reporter about how our priorities in different legislation affects their state or their city directly.”

She said it’s most evident with the COVID-19 relief package that was passed earlier this month.

“The COVID relief package that affects their state is I think one good example of the work that we do,” Hill said.