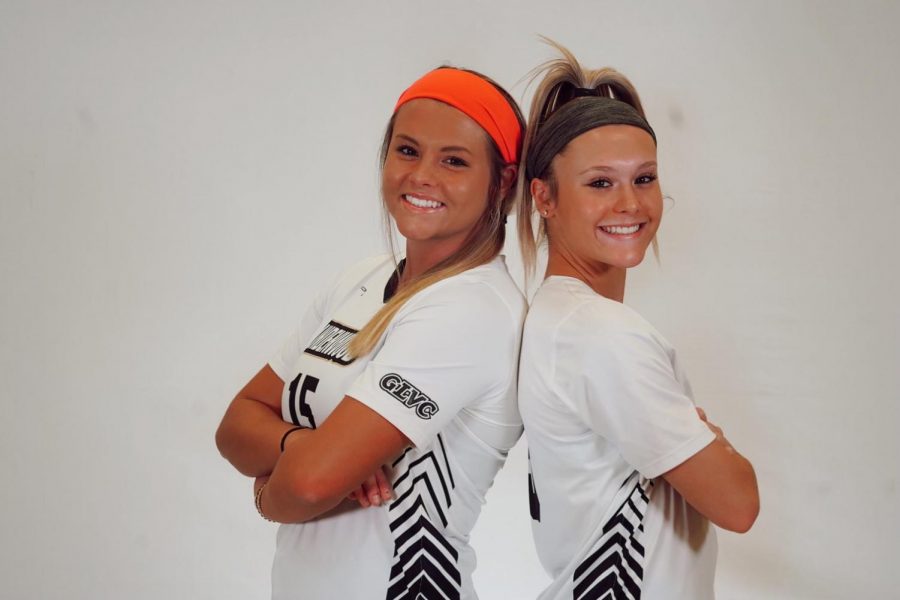 Morgan and Maggie Weller pose ahead of the spring 2021 season.

Both have spent over 15 years involved in the sport, making it become one of the key pieces in each of their lives.

And now, sisters Morgan and Maggie Weller are getting the chance to play together as teammates for Lindenwood University.

“The fact that we’re even able to get to this level is an accomplishment because not a lot of people even get to play Division II sports,” Morgan said. “And then the fact that we were able to be here together, I mean it doesn’t happen a lot.”

This isn’t the first time the two have been teammates, however. They played together one year in high school at Fort Zumwalt East in St. Peters, Mo., where Morgan was a senior while Maggie was a freshman.

That season, which came in 2016, Zumwalt East went 12-11 with both Weller sisters playing key roles in the team’s success. Morgan scored a team high 11 goals with five assists, while Maggie had three goals and two assists in her freshman campaign.

In what was their first year stepping on the field with each other in their careers, Morgan described it as a special opportunity, especially considering Maggie had already entered the team so quickly into her time at the school.

“I was just really excited for her because I think it’s really hard to make varsity as a freshman,” Morgan said. “We’ve both been playing soccer forever, but to be able to play together and actually be teammates was a really cool experience for both of us.”

When trying to think of a top memory from their brief time playing together in high school, Maggie noted one occasion where she assisted Morgan on one of her goals.

Morgan took a different route, revisiting multiple separate moments that she says stood out for her.

“I just remember starting lineups, it would be really cool to stand by each other,” Morgan said. “And just for our parents to both be able to watch us at the same time and not have to choose whose game they were going to go see.”

Not only did they get the chance to play with one another, but they did so in relatable roles.

Both Morgan and Maggie are forwards, allowing them to link up with each other much more often throughout games.

“Because we play a similar position, we’re really working together the whole time up top,” Maggie said. “Because we’re working the same position, it’s more fun to actually be able to connect and work together to be able to score.”

Having both of the Weller’s at the front of the attack has proved to be beneficial not just for them as individual players, but also for the teams they represent.

Lindenwood women’s soccer head coach Dave Musso has recognized this in the duo’s early days at the next level.

“I think it adds a competitiveness between them, which makes them better players,” Musso said. “They bring a lot of energy. And they have each other’s backs.”

Now the road has taken both Morgan and Maggie to Lindenwood University, even if they are a few years apart.

The Weller family isn’t new to the university, however. Both their father Richard Weller and mother Kristin Few attended Lindenwood for their college education. Richard not only went to the same school, but also for the same reason: to play soccer.

He competed for Lindenwood from 1989-93 during his time in St. Charles. While Kristin didn’t play in college, she also has experience in the sport, playing at the high school level.

While they don’t have any other siblings, Morgan joked that they would play soccer if they had any.

Morgan committed to Lindenwood in 2016, around the beginning of her senior year. At first, she says that she didn’t want to go to the same university as her family had gone to as she wanted to do something different.

But after spending time on campus, Morgan had changed her mind.

In just her first season as a Lion, Morgan appeared in all 18 games, starting 16, while also recording two goals and two assists. Her first career goal came against Northwest Missouri State on Sept. 22, 2017.

The following year, the forward was an honorable mention for All-MIAA. She led the team in goals with five, and in assists with four.

“Great spirit about her, her work ethic, and just a heavy shot,” Musso said. “Our team defending starts with our forwards, and Morgan is a big part of that.”

In 2019, Morgan saw her junior season get cut short right from the start, as she tore her left achilles in the second day of preseason in August. There were just two minutes left in the practice.

The injury sidelined her for a full calendar year, as she wasn’t cleared to return to action until Aug. 2020.

“I don’t think, if I wouldn’t have had the support that I did, that I would’ve been able to come back,” Morgan said. “They were always just so encouraging and my athletic trainer really took the time to help me get back to where I needed to be.”

Another factor that played a role in motivating her return was that Maggie would soon be joining her at Lindenwood as well.

“Knowing that Maggie was coming here, that just made me want to be able to be out there with her,” Morgan said.

Maggie committed to Lindenwood during her junior year of high school in Nov. 2018. She felt similarly to her older sister in that at first, she also didn’t want to go to St. Charles as she didn’t want people to think she was only going to Lindenwood because Morgan was also playing there.

When comparing to other schools, however, Maggie found no better fit than at Lindenwood. From the campus itself and the university being a good place for her major (education), no other option was a better fit.

“I looked at other schools, and I just liked all the facilities we have here,” Maggie said. “I thought the coaches were nice and way more welcoming than anyone else I had talked to. Plus I also wanted to stay close to home, so I thought it was a good place to be.”

In just her freshman season, Maggie is tied for the team lead in goals scored with three on the year, while also leading the Lions in shots with 33. The second time she took the field for Lindenwood was on Feb. 28 against Quincy, where she tallied her first career assist.

Musso has been impressed by what he has seen so far from his freshman forward.

“She’s a high-level player and I think we haven’t seen the best of her yet,” Musso said. “I think she’s just getting her feet wet. She has tremendous workrate, and tenacious defensive skills. She hunts down balls, and she’s got speed that makes back’s lives really difficult.”

Both have played a key role in Lindenwood’s success this season. They currently sit in a playoff spot in the GLVC, as their 7-2-3 record is good enough for fourth in the conference.

The already built chemistry between the two is another reason for their success so far.

“Just being able to play with someone where I know how she plays already, it just helps all of the forwards because we’re just able to connect really well,” Morgan said. “And I always kind of know what she’s going to do with the ball so I know where to be to help her out and support her.”

Morgan is in her fourth year at Lindenwood, but will be returning for one final season in the fall. This means one more chance for the Weller duo to play together once the spring season concludes.

Maggie knows to not take this for granted and to embrace the moment and this opportunity while it is still here.

“When it’s over, that’s what I’ll think about,” Maggie said. “We only have this season and probably one more so it’s definitely going to be a drastic difference when she’s not on the team anymore.”

“Being able to be in the moment and seeing her on the field is just an awesome experience,” Morgan said, “and I obviously never want to take my time here for granted and I’ll always cherish and remember this time.”

“When I’m older and I have children, I will tell them and I think they would think it’s really cool that I was able to play with my sister.”

One more home game remains on the regular season schedule, with the Lions hosting Lewis on April 16 as they look to secure home-field advantage for the first round of the GLVC tournament. It’ll be the second to last postseason the Weller sisters will get to play with one another.