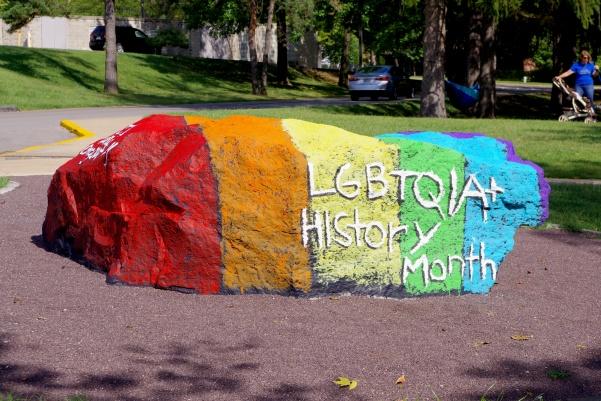 The Lion Pride rock painted by Genders/Sexualities Alliance in 2018.

Editor’s note: This article was updated on April 29 with comments from Lee and Hamilton.

Some leaders of student organizations are said they were disappointed after three top Lindenwood officials met with them last Tuesday to discuss the university’s handling of diversity and inclusion matters.

The meeting was scheduled after students from the two groups sent to Porter’s office two letters that expressed frustration at a perceived lack of progress regarding equality and diversity on campus.

The meeting was to address concerns regarding the Center of Diversity and Inclusion, which is located on the third floor of Evans Commons. The Center is dedicated to enhancing the lives of students from under-represented groups like international, LGBTQ+, and disabled students.

Moyich said in an email interview that the administration opened the meeting by allowing students to address their concerns.

“We discussed the diversity initiatives being worked on by the university, the Center for Diversity and Inclusion, and ended by making plans to meet again,” Moyich said. “One of the initiatives discussed included Diversify the Pride and our RISE project which will be integrated into our classrooms over the course of the next academic year.”

Moyich said the next meeting is scheduled for Wednesday, May 5 to further discussions.

GSA President Saralinda Twente said that overall, the meeting with the administration was disappointing and that Porter “dug himself a deeper hole.”

“He preaches that he has educated himself on diversity and inclusion, yet uses terms such as “the transgenders” to refer to us. Not only is this terminology improper, it is disrespectful,” Twente said.

Twente said that the organization presidents were given statistics that were meant to provide evidence of diversity, equity, and inclusion efforts on campus. She said that while the numbers gave data, they don’t amount to the real experience marginalized students face everyday.

“Our experiences overpower any factual based “evidence” that the University persistently threw in our face,” Twente said.

Twente also said that when BSU President Robby X Hamilton asked if Porter could reach out to the Asian community and show support regarding the recent hate crimes in the United States, the response was unsympathetic.

“Our experience is what needs to be heard, seen, and validated. We refuse to be silenced, so I want to make it clear that this is only the beginning. We will not stop on the first step when a mile-long staircase lies ahead. I expect the same from upper administration,” Twente said.

Lee disagrees with Twente, and said that the meeting was successful.

“It was a successful meeting. We were able to actually talk and we were actually able to get our point across,” Lee said. “Dr. Porter gave us real intel and showed us real numbers on how Lindenwood is working towards that diversity, equity, and inclusion.

“And he also assured us that just because people don’t come out and out their life on what their sexuality is, does not mean that those people are not in position or in play.”

Lee said the vice president of Student Involvement wrote a letter to the Office of the President on behalf of LSG expressing concern on DEI initiatives, and Marco was then sent to the meeting on April 6 to represent LSG.

“I was sent there as the president to kind of defuse the situation.”

Lee said he wants people to know that diversity is not just a race or gender issue, and that Porter is working towards a more inclusive culture at Lindenwood.

“He’s a good leader. We all have our own different methods to how we handle things, but he is definitely worthy of his position,” Lee said.

Lee said he felt more comfortable when the administration laid out a plan with data.

“He [Porter] showed us hard fats, real facts, real numbers, so that’s really what it was. And he was just saying how he’s here for us,” Lee said.

BSU President Robby X Hamilton said that he, Twente, and Lee are more focused than ever to bring a positive change to Lindenwood.

Hamilton said he agrees with Lee that Lindenwood is making an effort and showing evidence on improving DEI initiatives at Lindenwood, but that his disappointment is not far from Twente’s.

“I’m not the most pleased with how things are going, but I believe that we can work together to make it better,” Hamilton said. “I identify with Saralinda [Twente] and Marco [Lee] because Marco is correct, the President did show us facts.

“Saralinda and myself, we just want more from the administration, that’s really the bottom line.”

Hamilton said he was displeased with Porter’s response to the recent rise in Asian hate crimes.

Hamilton said he understood where Porter was coming from and that they can’t put out a message every day to the unjust crimes in different communities, but when an accumulation of crimes occur, Lindenwood should address and comfort that group of people.

“It was positive because of the fact that he [Porter] sat down with us and showed us what he was doing. But of course, everything can be improved,” Hamilton said.

Hamilton said he will become the next LSG president in the fall, and he is looking forward to working with Porter to make experiences better for every group on campus.

On Wednesday, the student organizations had a meeting with Fox 2 news to address the ongoing issues.

Heather Brown-Hudson, adjunct instructor of Gender Studies at Lindenwood and GSA adviser, told Lindenlink in an email interview that she spoke to Fox 2 news and told them that after listening to students and giving vocal support, the university should follow up with action.

Brown-Hudson mentioned Lindenwood has little diversity among faculty, staff and administration, and that non white histories and cultures are being taught almost exclusively by white faculty.

“To my knowledge, there is one black full time faculty member,” Brown-Hudson said in an email. “There is one black employee in a leadership role. And there are NO VPs or Deans of school who represent the diverse communities that make up our student body.

“Yet in a recent meeting with students, the President himself bragged about how diverse the applicants were for a recent job opening, maybe for the brand new Chief Diversity Officer position. “

Brown-Hudson said that what they’ve always wanted is for the few with the most power to take action to diversify the board, leadership, faculty and staff and avoid tokenism while doing it.

“Many of us have been around much longer than the few folks who, often unilaterally, make such impactful, institution- altering decisions,” Brown-Hudson said.

Correction: An earlier version of this story stated that Brown-Hudson was a full-time professor.