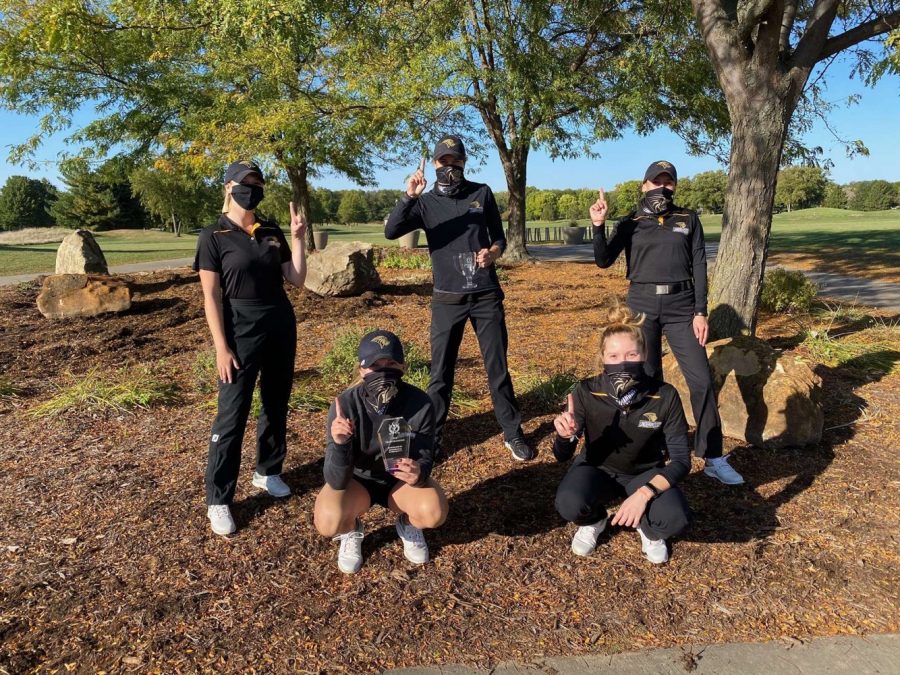 Women's golf poses after competing in their final tournament of the season in Collinsville, IL on 10/20.

Lindenwood women’s golf had a top five finish this past weekend in the GLVC Championships, taking fourth in the conference.

“Fourth place was a strong finish,” head coach Abby Weber said in an email. “I think that we could have played better, but the spring didn’t cooperate with us in terms of weather this year.”

It was the program’s first ever GLVC Championships appearance, with the competition taking place in Fishers, Ind.

Previously coming from the MIAA, Weber says both postseasons were similarly structured.

“The tournament was similar to our conference championship with the MIAA,” Weber said. “The course was set up to be extremely challenging and the weather was cold, windy and rainy.”

The Lions were tied for fifth with McKendree after the opening round, tallying a score of 335. McKenna Montgomery paced the team with an 81 in the round, followed by Josefina Haupt and Noelia Rodriguez’s 83’s.

Montgomery continued her strong play in the second round, leading the Lions again with a 77. She hit two birdies in the front nine and was in a tie for ninth in the conference. Haupt also shot less than 80, putting together a 78.

On Sunday, Lindenwood scored a 340, giving them a total of 1003 for the weekend. The score put them three strokes ahead of fifth place McKendree. Illinois-Springfield was ahead of the Lions in third with a 980. Indianapolis took first with a 915.

“I think that the girls played the best they could, considering all of the uncontrollables of the tournament,” Weber said.

Haupt finished as the top scorer for the Lions, putting up a 243, good enough for 12th in the competition. Weber was impressed by the veteran’s weekend, and career as a Lion.

“Josefina Haupt has been a true leader for this team over the last few years and we are really going to miss her next year,” Weber said. “She had a very strong spring season, with top finishes during our regular season tournaments. She was a very consistent and reliable player.”

After a season that saw the Lions take first on two separate occasions, Weber is hopeful for what lies ahead for the team.

“I have five new players coming in next fall, so we will see some new faces in the lineup and hopefully continue the success of our program,” Weber said. “I think that COVID has really affected some of the players on the team, and I think that once we get back to normalcy, things will continue to get better.”