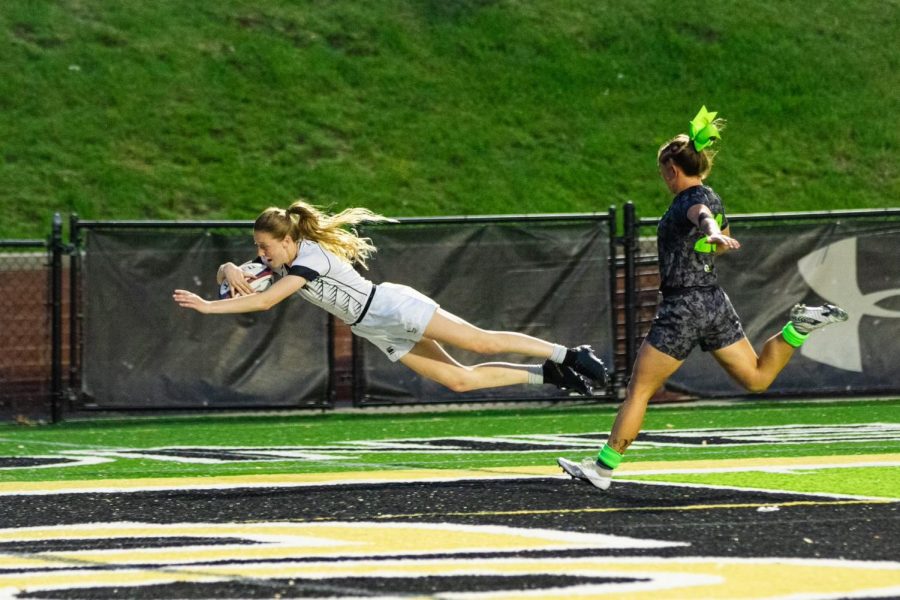 Junior Jessica Laughlin dives in to score to make it 39-12 for the Lions against Life University in the Division I Elite Championship on May 1, 2021.

“The best things in life come in threes”, is a saying that sounds appropriate given the current nature of the Lions’ women’s rugby program. With the 54-12 win over Life University, the Lions three-peated as national champions, barring last season’s cancellation due to COVID. All three have come against Life University.

“We didn’t look at the previous games heading into this matchup,” coach Billy Nicholas said after the game. “We knew Life University would be a competitive match for us. They always challenge us the most out of anyone we play.”

Even though the Lions beat Life twice over the regular season by a combined score of 90-17, the Lions felt the pressure of playing in front of their home crowd.

“It’s an additional pressure to host because your mistakes are under the lens,” Nicholas said. “We were happy we got to host a championship for the first time. We had friends and family out and grateful for the support through the season. It hasn’t been an easy year for anybody.”

The Lions controlled the game from the start, with a suffocating defensive attack that proved too much for Life. The hit-stick sliders must’ve been turned up for the Lions, as they punished Life University every time they tried to move the ball.

On offense, the Lions couldn’t be stopped. They effectively moved down the field with ease. Life respected each player on the field to point where any time a Lion was trapped, a fake would throw the defenders off and open a hole to run through. And if that running lane didn’t open, then the Lions were running through it.

“Our girls coming out playing with full hearts and support in the stands was a big factor for us,” Nicholas said.