A year-long season: how cross country and track athletes push through 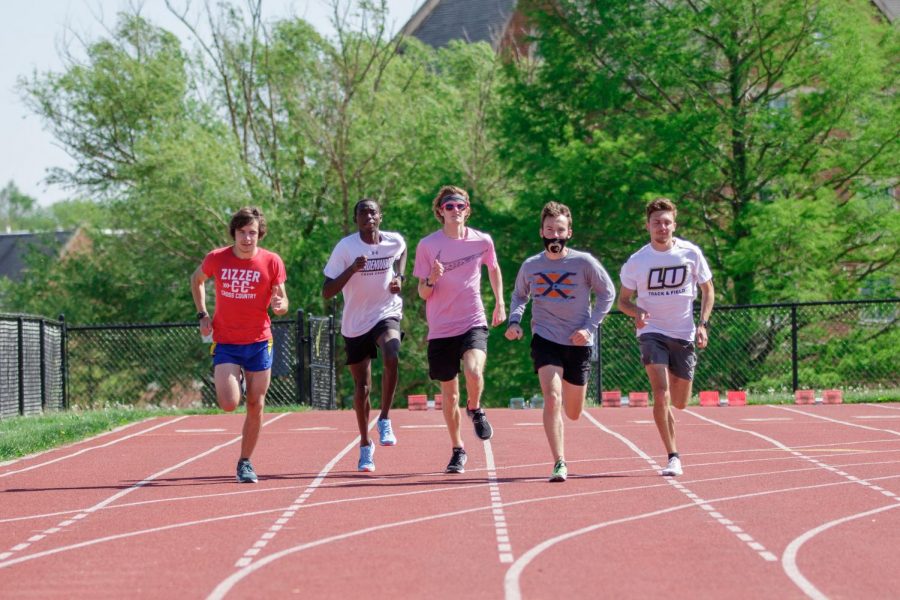 That’s how much time cross country and track and field distance runners have off the entire year in a season that never fully ends.

“You are stronger mentally after this experience,” sophomore Louis Moreau said. “Sometimes, it’s not an easy sport, so mentally it’s hard.”

While their season doesn’t officially start until they arrive on campus, members of the cross country and distance teams started running back in the summer. The amount they have to run depends on what point in the summer they are in.

At the beginning of the offseason, they are typically asked to run around 35 miles a week. As the runners get deeper into the summer, this number increases to about 60 miles each week. These amounts are handed out by cross country head coach Randy Cole, and they can vary for each individual.

Junior Maycee White realizes the importance of staying in shape during the summer months, even if the athletes aren’t officially in-season yet.

“Our training is so important, especially in the summer when we don’t have a team necessarily to hold us accountable,” White said. “With running, it’s very easy to become unfit so if you take even a week to two weeks off, physiologically you’re unfit and you have to re-train yourself.”
The cross country season begins
After a summer of preparation, the athletes head back to St. Charles come August for the start of the cross country season. Most athletes got to Lindenwood around 10-14 days before classes started for the fall semester.

Practices got underway on Aug. 24, which is the same day in which classes officially began. Due to the usual summer heat that is present around this time, training would start at 5 a.m. every morning from Monday-Friday during the August and September months.

For Moreau, he doesn’t mind the early start times, despite having to deal with the occasional unwelcomed alarm.

This past season, practices went on for a month before meets got started on Sept. 25 with the GLVC Dual Meet that took place in St. Charles, Missouri.

As a result of the pandemic, the cross country season was a shortened and unique one with a fairly different looking schedule.

“This year was kind of reduced in that in cross country, normally we’d have six or seven meets, which include the regional and nationals,” Cole said. “Division II didn’t host nationals or regionals because of COVID, so our conference, we decided to do a mini-season and we put our teams or the schools into pods.”

The Dual Meet that Lindenwood hosted was one of the lone three competitions that the Lions participated in throughout the campaign. The second one, which was the GLVC West Divisional, was held two weeks later in Elsah, Illinois.

With there being no nationals, the season came to an end on Oct. 24 with the GLVC Championships. Eight schools competed, with Lindenwood’s men’s team finishing fifth, while the women’s team came in eighth.

Even though the season was shorter than usual, what lies in front of these athletes is still a lengthy season as a whole. Sophomore Athena Viers has become more comfortable in managing this in her time at Lindenwood.

“I know the long year ahead is a lot to deal with,” Viers said, “but after awhile, you kind of get used to constantly doing the same thing and not having a break.”

This then becomes one of the biggest responsibilities and challenges of the coaching staff, including Cole. In order to keep each athlete fit, their workloads are managed so that they do not get worn out by the time either indoor or outdoor track gets started.

“We try to manage their training and their racing schedule so we don’t over-race them,” Cole said. “So in cross country, we will run every other week. We don’t race every single week, so that kind of spreads out through the whole fall.”

Not only is this a challenge for Cole, but finding the right balance is difficult for the athletes as well.

Viers is just one of the runners who puts heavy emphasis and focus on the cross country season. This then can often create issues by the time the indoor track season starts in the winter.

“In cross country, I bring it all out, where in indoor, I’m struggling and that’s how a lot of the girls are,” Viers said. “For cross country, they’re killing it, getting PR’s, and then indoor is kind of like a ‘oh, we’re injured’ and then outdoor we’re back in the groove.”

White, who has been running since her freshman year of high school, has seen this be an issue too, but also has become more comfortable in being able to manage through it.

“As an athlete who has been running for a long time, you’re gonna know your body and you’re gonna know when you might need to take it back a little bit,” White said, “and do maybe a de-load week where instead of doing your normal 50 mile week, you’re doing a 40 mile week just to kind of make those legs fresh again.”
Shifting into indoor track and field
The first two off weeks the athletes get come after the conclusion of the cross country season, leading into the indoor track and field campaign. The other two are right after the outdoor season ends in May heading into the summer.

One of the biggest differences between the two separate sports is in terms of practices. While cross country trains early in the morning in order to avoid the heat, the athletes have to shift their schedules for indoor as they practice at 3 p.m. each day.

Another one, as pointed out by Moreau, is the overall differences in mindset between both cross country and track and field.

“Track and field is more individual, and in cross country, team is more important than the individual,” Moreau said. “We want to finish as GLVC champions, but it’s collectively not individual and in track and field, you run for you.”

Indoor track and field ran from Jan. 16 until Feb. 26, before the NCAA Division II Indoor Championships were held in the middle of March.

Lindenwood competed in six separate meets in the regular season, with most taking place just one week after the last. All six were on the road, with locations ranging from Maryville, Missouri to Topeka, Kansas which was the destination for two different meets.

In terms of training, most were held at 3 p.m. throughout the week. They would be earlier in the morning if the athletes were to practice during the weekend.

It’s the same drill for outdoor track and field, with most practices taking place in the middle of the day.
Ending with the outdoor season
Little time separated the finish of the indoor season and the outdoor one, as the latter opened up with a meet on March 27. Similar to the indoor schedule, Lindenwood also had six outdoor meets in the regular season.

By this point, most of the runners had already gone through two different seasons. Multiple challenges and variables come up as a result of this, such as being able to say fit, which Viers has seen her team struggle with at times.

“I’ve seen so many of our girls and guys struggle with that,” Viers said, “and for the first couple of weeks of outdoor, we are kind of trying to compete but honestly we’re not at our best because we’re really injured. So I would say the best way that we handle that is trying to slow down a bit to where when the actual important races come, we can speed up.”

With fatigue and fitness becoming one of the more challenging aspects to deal with at this point in the year, something that helped was the more favorable travel schedule.

Two of the six meets were hosted by Lindenwood, and none of them were outside of Missouri. The GLVC Championships are in Rolla, Missouri from May 6-8 as well. Nationals take place at the end of the month.

And then it’s over. A year that began back in August comes to an end in May, nearly nine months later. And by that point, there’s one word that best describes how these athletes feel: tired.

“You can be at your peak fitness and feeling really good, but at that point, you’re just exhausted in every way, shape, and form,” White said. “Mentally, emotionally, physically, just tired.”

A key thing that contributes to assisting the runners when they may face these obstacles throughout a season is their inner motivation.

Cole knows that there is only so much the coaching staff can do to help the members of the team find this as they progress throughout the year.

“You can lead them to the water, but they’ve got to want to drink it,” Cole said.

For Moreau and most of his teammates, having this desire hasn’t been an issue. He uses his end-goal to push him through all three seasons.

“You are motivated because you want to achieve your goal, at least for everyone in the team,” Moreau said.

Viers, when finding what motivates her, looked at the bigger picture and the situation that she is in as a student-athlete.

“When I am having a difficult workout, I do often think about like, ‘okay but I’m living someone else’s dream that they might not have the opportunity to do,’” Viers said. “So I need to appreciate it more and not take it for granted.”

Also helping the athletes get through it all is the team that surrounds them. The overall positive environment of both track and field and cross country gives each individual a reason to want to come to practice the next day, or to finish difficult runs.

“Everyone is happy during training,” Moreau said. “It’s really good to go to training for that because you know you are going to see your friend and spend the good moments with them.”

This uplifting team culture has benefited the athletes in dealing with another challenge that comes with being a student-athlete in the loss of some of the social aspects of college.

But while with their disciplines and their teams, White and others have had an easier time at being able to manage this thanks to how their teammates help elevate them each day in practice.

“You want people that are gonna push you during training so that you can better yourself for yourself but also better yourself to help out the rest of the team when it comes to team scoring,” White said.

In an experience like this one, where students are forced to balance a year-long schedule for their sports with schoolwork and possibly even their jobs, many challenges arise. Through these difficulties, Viers sees an opportunity to grow going forward as a Lion, and beyond after her time at Lindenwood.

“I think the experiences have made a change in me,” Viers said. “Because I know , ‘oh yeah, I was a student-athlete in college’, not many people can say that. After this, I’ll be more grateful for what I have done in college.”

The conference season wraps up this weekend for the GLVC Outdoor Track and Field Championships, before the year that started back in August comes to a close from May 27-29 in the NCAA Division II Outdoor Championships.