Women’s lacrosse moves on past No. 1 Indianapolis to NCAA Final Four 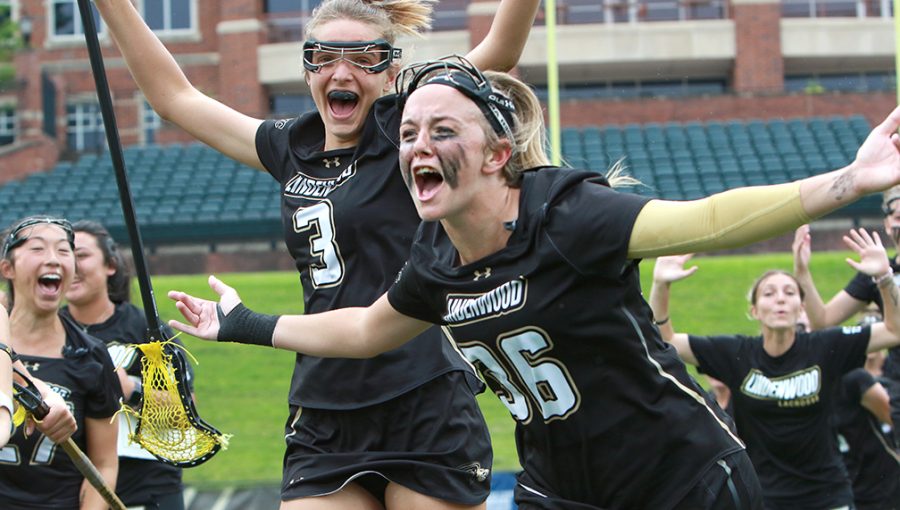 Erin McGuire (36) celebrates with teammates as women's lacrosse defeats No. 1 Indianapolis on May 16 at Hunter Stadium.

In a battle between the top two ranked teams in the country, No. 2 Lindenwood women’s lacrosse took down the No. 1 University of Indianapolis Greyhounds 17-13 in the NCAA quarterfinals on Sunday at Hunter Stadium in St. Charles.

“Absolutely thrilling,” head coach Jack Cribbin said. “Just really happy for the players. They executed the game plan that we put forth this week and to have two top 10 wins in three days is huge.”

Lindenwood advanced to the quarterfinals after defeating No. 10 Regis on Friday 14-9, setting up the clash with Indianapolis.

This was the third meeting of the season between the two Great Lakes Valley Conference powerhouses. Lindenwood won the first contest on April 22 by a final score of 12-10, with Emma Arnold leading the way with six goals on the day.

They met again on May 2 in the GLVC championship, where Indianapolis was able to turn it around and earn the 12-9 victory and conference title.

After two prior games against the Greyhounds, Cribbin was prepared for another evenly-fought contest.

“Our teams are very similar as far as talent goes, all over the field in every position,” Cribbin said. “But I think we kind of both knew each other after playing each other now three times in a month.”

The third and final pairing took place at Lindenwood’s Hunter Stadium in St. Charles. The Lions used the home-field advantage to their full advantage in the early-going, taking a 5-0 lead in the opening 12 minutes.

“We wanted to attack, and attack early,” Cribbin said. “We wanted to play an aggressive brand of lacrosse today, both on the offensive side and the defensive side. But also we knew, to keep things in perspective. It’s a 60 minute game. It’s not the first to five goals, it’s not who plays good for 10-15 minutes. You have to play good for the whole game.”

The Lions took an 8-3 lead into the halftime break. Paige Sutton paced Lindenwood with four goals in the first half.

Indianapolis struck first in the second through its leading scorer Abigail Lagos, who finished her season with 62 goals. The Greyhounds’ biggest run came around the midway point in the half, when they scored three consecutive goals through 11:29 to cut the Lion lead down to just 12-9.

A common theme for Lindenwood in the game was after Indianapolis goals and runs such as this one, the Lions’ attack would find an answer. Emma Wildhart scored back-to-back goals after this to extend the lead to 14-9.

“Lacrosse is a game of streaks, and it’s who can sustain the streaks,” Cribbin said. “When they went on a little bit of a run, we answered. Our kids just fought, our kids were just very tough today. Mentally tough, physically out there. And it was a win that was earned through resiliency and working together as a team.”

Lexy Biller scored the team’s final goal with 10 seconds remaining, making it 17-13. Biller scored three and tallied one assist in the win. Sutton had five goals and an assist, while Wildhart was right behind her with four. Carly Fedorowski and Sara Grieco found the back-of-the-net twice each, with Arnold adding the other Lindenwood goal.

Goalie Eleanor Kast had 10 saves in goal, earning high praise from Cribbin after the game.

“I think Eleanor Kast is the best goalie in the country, no matter what anyone says.”

Cribbin said it wasn’t just Kast who stepped up for Lindenwood when it mattered most.

“Our defense [was] so athletic and did an awesome job in getting key stops in the beginning and then key stops down the stretch in ground balls and then our clears were just tremendous,” Cribbin said.

The win improves the Lions’ record to 15-1 on the season, and sends Lindenwood to their first NCAA Final Four since 2016.

“It’s just an exciting day for our program, a win against a very talented team, and just couldn’t be any more grateful to be heading to Virginia next week for the Final Four,” Cribbin said.

Both the semi finals and final will be held in Salem, Virginia. No. 2 Lindenwood will take on No. 15 Roberts Wesleyan (14-1) from Ulster County, New York on Friday at 6 p.m.. The winner will play either Queens (North Carolina) or East Stroudsburg from Pennsylvania on Sunday at 1 p.m. at Kerr Stadium.