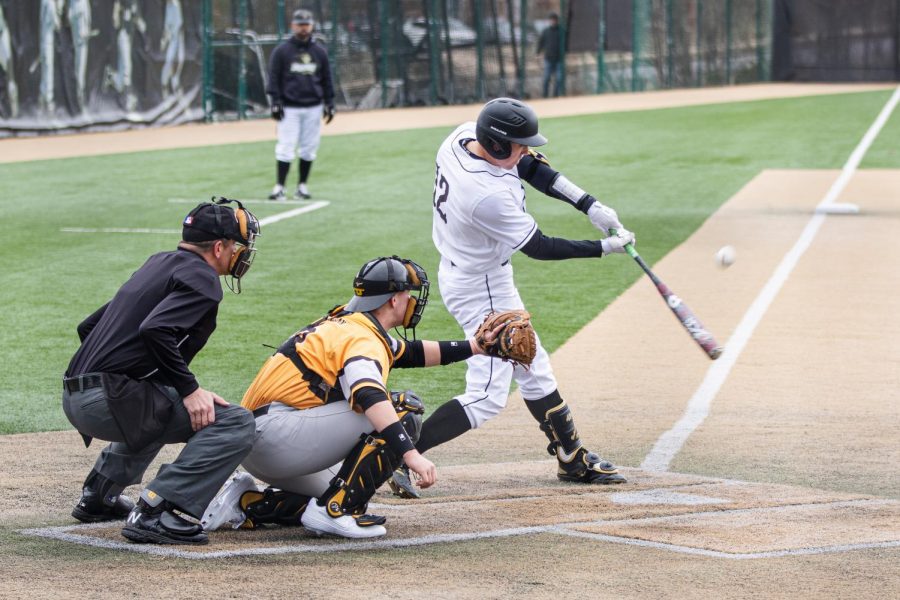 Lindenwood senior Bryce Beckmann takes a swing during the Lions' game Ohio Dominican on Feb. 15., 2020. The Lions swept a doubleheader, 9-0 and 4-0.

In their first full season in the Great Lakes Valley Conference, the Lindenwood Lions baseball team captured the conference title on Sunday.

The Lions earned the title on Sunday with an 8-6 win over No. 5 Illinois-Springfield in St. Charles at the Lou Brock Sports Complex. This wrapped up a four-day competition that began on Thursday.

Missouri S&T was Lindenwood’s first opponent on the opening day of the tournament. As was the case for their entire conference-winning run, the Lions’ bats came alive against the Miners as they won 8-4. Lindenwood scored at least eight runs in each of their four games.

Shortstop Kolby Schulte led the way on Thursday, going 4-4 with a triple. Blake Beckmann made the start, going 7.0 innings with seven strikeouts and four earned runs.

The biggest offensive output came on Friday against Southern Indiana when the Lions scored 10 runs in a 10-2 victory. Lindenwood led 10-0 after seven innings before allowing two runs in the eighth.

Tyler Cassmeyer started and delivered 5.1 scoreless innings and four strikeouts to assist the big day for the bats.

On Saturday, pitchers Niko Marshall and Brody Roach combined to deliver Lindenwood’s lone shutout of the tournament in its 9-0 win against Indianapolis in the semi final.

Their closest game yet came in the championship game against Illinois-Springfield, where the Lions trailed 4-1 after the first three innings. It was 6-3 heading into the bottom of the eighth, before the Lindenwood bats exploded for five runs to take an 8-6 lead.

Collier tied the game with a one-out, two-RBI single to make it 6-6. Schulte then hit a sacrifice fly to bring in Will Lanxon from third and give the Lions their first advantage of the game. Beckmann scored Lindenwood’s eighth and final run.

Justin Taylor stayed in the game for the ninth after entering an inning prior, and finished the job to secure Lindenwood’s first GLVC title.

At 33-7 and as the champions of the GLVC, the No. 11 ranked Lions will next compete in the NCAA Regional Tournament which will take place May 27-30 once again at Lindenwood’s Lou Brock Sports Complex. It’ll be the program’s first national tournament appearance since 2017.