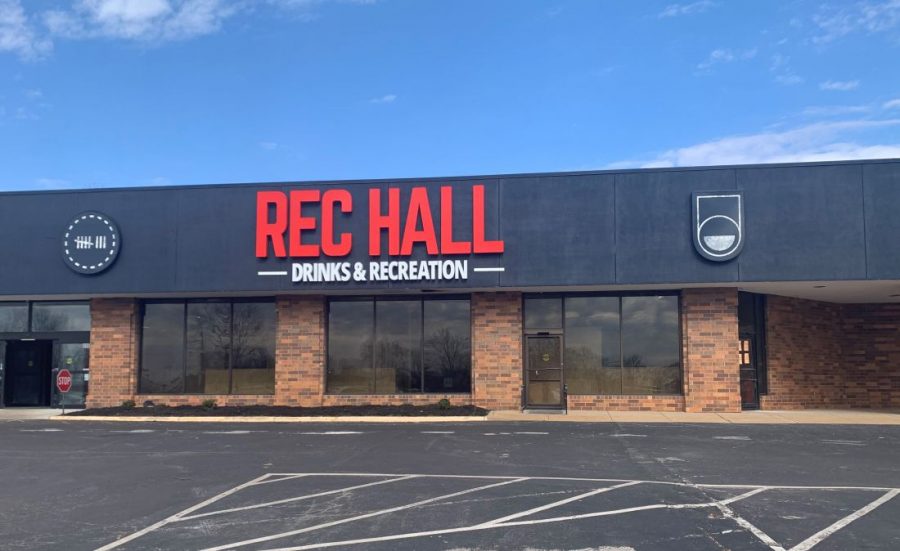 The sliding doors open smoothly, revealing the entry space in front of another set of sliding doors. This is the only piece of the building that is familiar with the long-running Schnucks building.

Instead of rows of aisles and check-out counters, there is a line of ping pong tables in front of a large ‘St. Charles’ sign past the second sliding doors. Lounge areas with tables and comfortable chairs occupy the center of the cleared spacing. At the entrance is a newly constructed bar, with a larger bar in the back. The inside is now a mix of a sports bar and a gymnasium.

Rec Hall STL is a new attraction in Saint Charles, taking over the old Schnucks building on Duchesne Road. The interior of the former grocery store is now a massive clearing for the indoor sports-inspired games and drinking areas.

The gaming arenas offer familiar games like cornhole and shuffleboard and inventive ones such as air bowling, where a player throws a football at bowling pins. The venue even offers oversized beer pong, Jenga, and Connect Four on various tables.

Sales and Events Coordinator Allison Kranz said that they offer “more interactive team sports games that everyone can play and there’s really no true skill to it.”

Rec Hall STL had the unfortunate opportunity of opening during the COVID-19 pandemic. It officially opened in February of this year, after setbacks with construction and quarantine.

“We wanted to open at the end of the year last year,” Sales and Events Manager Kate Nelson said.

Despite the circumstances, Rec Hall STL has been successful since its opening weekend. The staff has noted ranges from 30- to 50-year-olds, even guests over 50. The staff and owners maintained Saint Charles’ guidelines to keep everything sanitized and the guests safe from COVID.

“Opening night was a lot of fun,” Kranz said. “There was a lot of different people that came through. Everyone had a great time and was really excited to see a place like this opening up in Saint Charles.”

Since their February opening, Nelson and Kranz have noted a steady increase of patrons for their usual nights as well as special events. They recently held the 0.5K Underachiever’s Run last Saturday, drawing over 100 participants for the mock-marathon, as posted on their Facebook page.

Rec Hall STL was previously the Recess STL complex in The Grove, a neighborhood in St. Louis. It was intended to be a “pop-up” venue until they found a more desirable location.

“The Grove location was always just a pop-up/temporary location,” Nelson said in an e-mail. “Our owner Chris had a couple of locations he was looking at for our permanent space.  He liked this spot and this community so we moved here.”

Soon, Rec Hall STL will also be opening a separate St. Louis City location, occupying the Armory property in Midtown. The plans for it include multiple floors for games and an open rooftop, according to an article in Sauce Magazine.

“The idea is that we have sister locations, one in the city and one in the suburbs,” Nelson said.

However, the Saint Charles and the Armory locations are only the first of many. Plans are underway for more venues to develop in the Midwest.

“Rec Hall entities are planning to expand throughout the Midwest very quickly,” Luke Wade, one of Rec Hall’s owners, said in an article on Startland News.