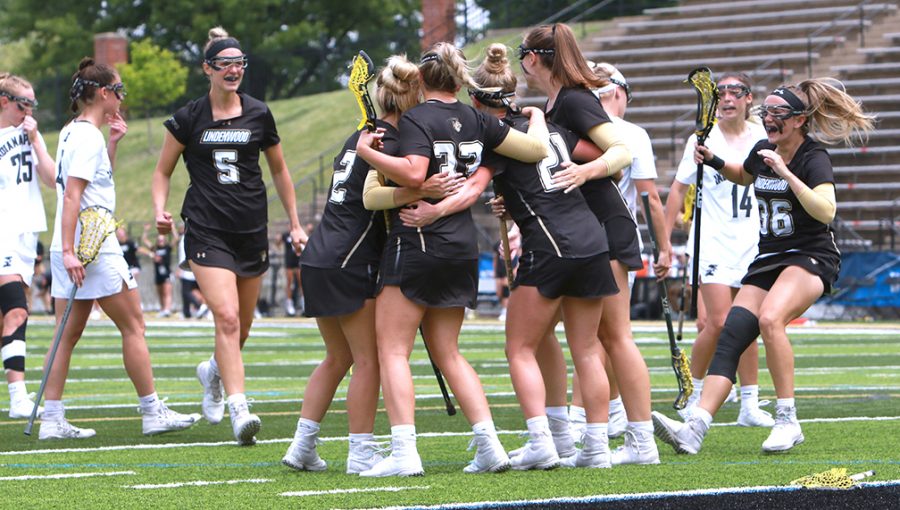 Lindenwood celebrates after scoring against No. 1 Indianapolis on May 16 in the quarterfinals of the NCAA tournament.

With a 14-12 win over No. 5 Queens (North Carolina) on Sunday in Salem, Virginia, No. 2 Lindenwood women’s lacrosse became national champions for the first time in program history.

It was a historic achievement for both women’s lacrosse and Lindenwood sports as a whole, as it was the first time any Lions team had appeared in or won an NCAA title.

Lindenwood earned its spot in Sunday’s championship game with a 12-9 win on Friday against No. 15 Roberts Wesleyan in the semi final.

The story of the first half was the Lions’ offense. Lindenwood scored as many goals in the first 30 minutes as they had all of last game, putting 12 past Queens.

Lexy Biller paced the squad with a three-goal opening half. Carly Fedorowski and Erin McGuire both added two goals each.

Heading into the second half, the Lions were in control with a 12-5 lead.

Biller and Emma Arnold scored the first two goals of the second half to put Lindenwood up 14-5. The Lions had scored six consecutive goals up to this point.

Queens scored the remainder of the goals in the game.

Kara Blanchard netted three in a row past Eleanor Kast to make it 14-8 with 17:49 remaining. With about nine minutes left to go, Queens cut the Lions’ lead down to 14-10. This was the score up until the final three minutes, when Lindenwood was shown a yellow card and were down a player.

With the man-advantage, Queens made it just a two-goal at the 1:19 mark. But after a couple stops on the defensive end, the Lions held on for the 14-12 victory.

The win marked Lindenwood’s fourth of the NCAA tournament, with its run starting on May 14 against No. 10 Regis. Two days later, the Lions defeated No. 1 Indianapolis, earning a spot in Salem where they were able to make history.