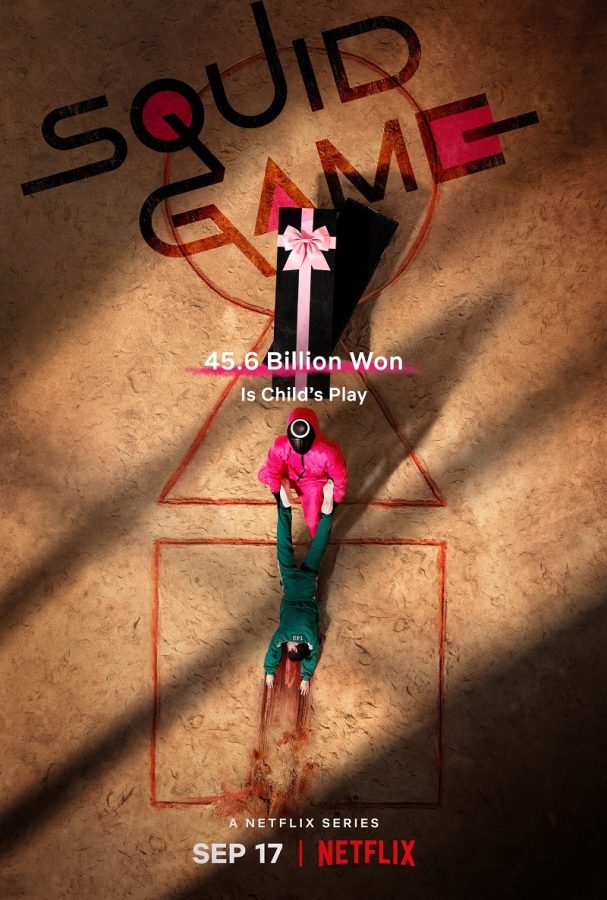 Netflix gets a lot of popular crazes for shows and movies: “Orange Is the New Black,” “Stranger Things,” “Bird Box,” and “Tiger King.”

Now comes along “Squid Game,” a TV series from South Korea with a strange name (I mean, not ONE squid is in the show). Not only is “Squid Game” becoming another big hit for the streaming service, but it may also be the biggest show Netflix has released this far.

“Squid Game” is a TV series of adults surviving kid games, but with deadlier consequences. Think of musical chairs, where after everyone sits down, someone shoots the last one standing in the head. Most of the games featured in this show are well known, but each game is explained for the players involved, which is helpful for the audience.

“Squid Game” is written and directed by Hwang Dong-hyuk. His films are often drama-centered stories, and he started making comedies and historical war films more recently. Hwang’s films are mostly known in South Korea, but now his name is getting out to a larger international audience, thanks to Netflix.

456 people wake up in a large room after accepting an offer for a big cash prize on an unoccupied island. The story mainly follows Seong Gi-Hun, a father with a ridiculous amount of debt, owing millions in won to loan sharks. All 456 players are under constant watch by masked guards in pink suits and PlayStation button masks. Soon, they are escorted to the first game for the money prize, which is a classic children’s game. They quickly discover that failing the game ends in death. By the time the first game is over, half of the players are shot to death.

Surprisingly, the players are given a chance to vote to stop the games and go home. After the majority votes to go back, it’s announced that the cash prize for the games would be 45.6 billion won (roughly $39 million in US currency as the time of this review). As they go back to their lives, the realities of their debt are too much. All players reluctantly return to the island for the prize money. Before Seoung returned, he tried to get the police to listen, who laughed at his wild claims.

One officer, Hwang Jun-ho, hears the story and believes the story is close to how his own brother disappeared years ago. Hwang follows Seong to the island, disguising himself as one of the pink guards. As he works undercover, he discovers more of the leader, known as The Frontman, and his financial backers, the VIPs.

So, the main part of “Squid Game” is, of course, the games. They may not be considered spoilers, but I’d prefer not to list them here. Part of the tension that this series uses is the anticipation of the upcoming games. The players are left in the dark in a warped version of fairness. They only know what’s coming as the game is presented, along with the audience.

This series almost looks like it could be a dark comedy. Grown adults playing kid games seriously, those same games ending with death, armed guards in bright pink tracksuits, masks that look like video game controller buttons, and colorful rooms.

“Squid Game” is not only a big success on Netflix; it’s also all over the internet and even has affected South Korean street vendors. Dalgona candy is considered a retro street candy made of melted sugar and baking soda from the 70s and 80s and is making a big comeback in popularity due to the show. Even social media has people making their own recipe of the treats as some kind of trending challenge.

If you’re not a fan of subtitles, you might find “Squid Game” a little difficult to follow. I know many people hate those, but I’ve seen a lot of foreign films so I’m used to it. Personally, I preferred it over the English dubbing, which I found annoying.

Either way, the series is addicting. It was hard to stop watching, even at 1 a.m. It was that ol’ Netflix binging which I hadn’t done in a long time. It ends with a cliffhanger, and it’s easy to think that there’ll be more seasons coming, based on its worldwide popularity.