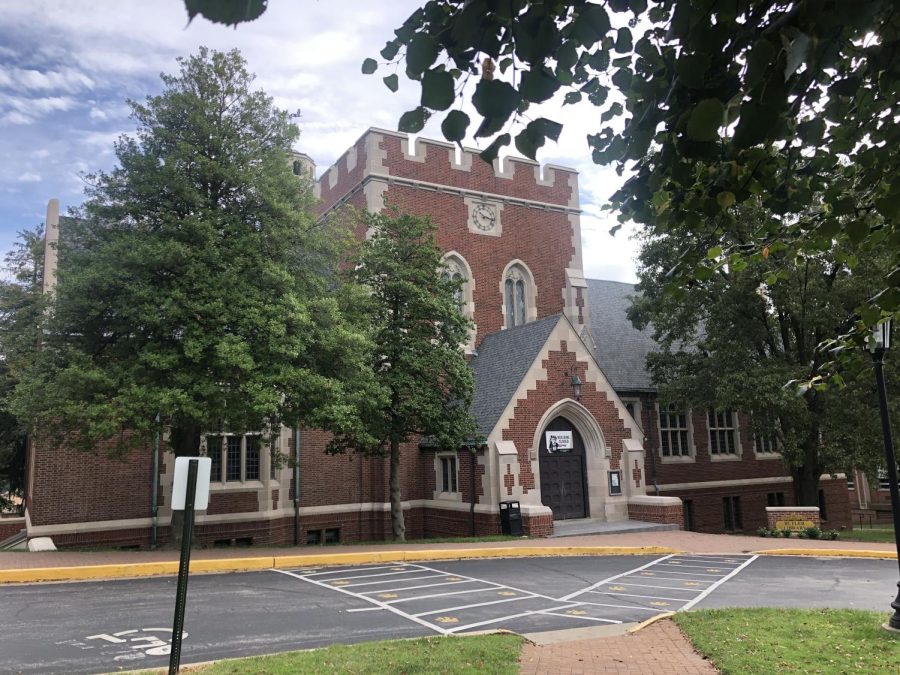 A recent picture of the main entrance of Butler Library by the old side of campus. Photo by Eva Laurens.

Built in 1929, the Butler Library was the home of Lindenwood’s library until it closed in 2016 and was replaced by the new Library and Academic Resources Center.

“The goal of the LARC was to provide a much larger and more modern place for students,” Senior Vice President Diane Moore said, “not only do their library experience but also to have their academic student success, the writing center, and several other groups in that same building.”

Situated between Roemer Hall and Young Hall, the Butler Library was named after Margaret Leggat Butler, the wife of Colonel James Gay Butler.

James Gay Butler lived in St. Louis and made his fortune in the tobacco industry as the director of the American Tobacco Company. When he retired, he gave money and properties to Lindenwood and wanted to name a building in honor of his wife, which ended up being the library by the old side of campus.

“The Butlers are the largest donors in the history of the university,” Moore said, “the equivalent of what they donated in today’s dollars would be over 55 million dollars.”

Right now, the building is still on steam heat from a boiler.

“That is not an efficient way to heat the building,” Moore said, “but over the summer it will get a new cooler and heating system.”

The T part of the library, also known as the “Harry Potter room,” was built in 1929 and in 1967 they made the two side additions. The building was very old and had a lot of challenges infrastructure-wise. It was not built to accommodate large groups, as there are columns in the middle of the rooms and the ceiling is very low. It is also a very dark place, so most students would prefer to sleep there instead of studying.

“My first year here I found students finding really dark corners to sleep in, so the Butler Library was used a lot for lounging,” Moore said.

When they are able to raise the funds to renovate the front of the building, the “Harry Potter room style” will turn into an event space.

“With an event space and a kitchen area so we can provide food on site, it can be a wedding venue, an alumni venue, it could be a place for fundraising, for student organizations to use for formals,” Moore said, “We see a lot of use and a lot of good activity in the future for the building.”

To this day, it is still unclear if they are going to keep the Butler name included in the new building.

“It won’t be our decision but my guess is that they will keep the Butler name tied to it,” Moore said.
The plan is to start the renovation this summer, but it will only happen if they are able to raise enough funds to start working on the building.

“It would cost somewhere close to a million dollars to renovate only the front part of the building so fundraising efforts are going on right now,” Moore said, “when we will be able to fundraise all that, we’ll be ready to roll. We got the construction design done, we got the big package ready to go.”

“We are going to bring it to the next level and make it shine.”