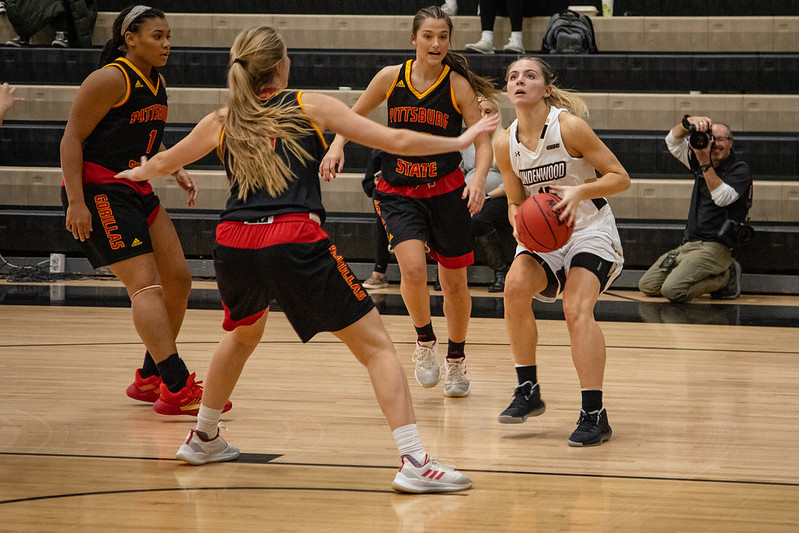 Lindenwood's Devin Fuhring holds the ball outside the paint, surrounded by Pittsburg State defenders on Nov. 13, 2019.

With a balance of experience and new additions to the roster, the Lions are looking to have another successful season in the GLVC this year.

In 2021-22, the team finally gets to play a full season again with all 29 games on their schedule.

“It’s wonderful,” head coach Katie Falco said. “We’re really happy to be back to what you want to call a normal scheduling and normal environments with us being able to play non-conference games and a full complete schedule and fans in the stands.”

Last year, Lindenwood played a 20-game, conference-only season where they dealt with several variables, including empty arenas and the cancellation of games.

“Last year was just a very unique season,” Falco said. “Our players, our coaches, our administration did a good job of working through some times that we’ve never had to experience before and making the most out of it and the challenges that went along with it were very broad times.”

This season, the Lions are ranked third in the GLVC preseason poll. In the short 2020 season, they finished 11-9.

“We were not satisfied with the season that we had and know that we left a few games out there that we wish would’ve resulted in different finishes,” Falco said. “But also know that we’ve got a lot to look forward to and believe that we’re going to have a good year.”

The Lions are returning all five of their starters for the 2021-22 season. This includes two all-GLVC players in Julia Ruzevich and Ellen McCorkle, as well as senior guard Hennessey Handy.

“We’re expecting those seniors to be able to bring the experience they have for our team, show the level of consistency that they’re capable of, and lead our team in a way that we’re going to be able to get done what we need to,” Falco said. “They’ve been in these environments, they know what we expect, and they’re competitive, and certainly talented young women as well.”

Along with a strong group of returners, the Lions added four freshmen to the roster this year: Alana Striverson, Sophia Horton, Mary McGrath, and Paige Craft.

“They’re just a really nice group, great class that we were able to bring in that I feel like will provide our team with a lot of depth and they’re going to get opportunities to compete and impact our program,” Falco said. “They’re talented and they’re fun to coach and they’re absorbing everything that we’re teaching them at this point.”

Although the Lions fell in an exhibition match to the University of Missouri on Oct. 28, Falco still believes that her team has what it takes to have a strong season.

“The result of the Mizzou game wasn’t what we wanted, but we were very proud of our process,” coach Falco said. “And that’s one thing we’ve been talking to our team a lot, ‘what is a process?’.”

The Lions will go on the road for another exhibition game against Eastern Illinois on Nov. 9 at 6 p.m.