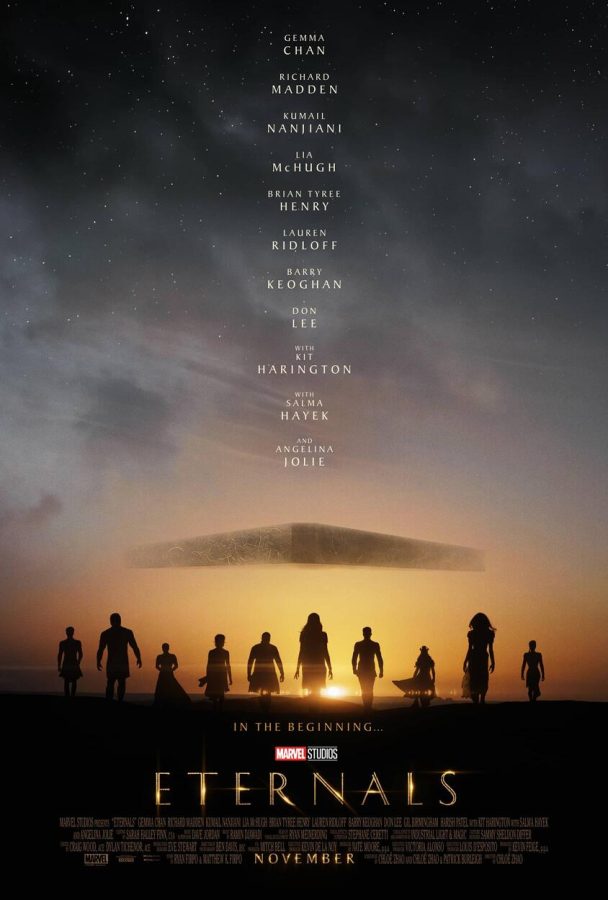 Long have the Eternals lived among us, defending us from dangerous monsters called Deviants from space. But now, this intergalactic team of immortals will face a new greater enemy: Rotten Tomatoes.

So, who are the Eternals? The short answer is, they’re part of an immortal alien race that arrived on Earth thousands of years ago to protect primitive humans from Deviants, monstrous aliens that have invaded the planet. Each Eternal has their own superpower, ranging from laser eyes, flying, super-speed, illusions, and… zapping finger guns.

These superbeings have been stationed on Earth for thousands of years under orders from powerful beings called Celestials. They are a cosmic race that can literally create and destroy galaxies and have been seen before in other Marvel Cinematic Universe, or MCU, movies like “Guardians of the Galaxy.”

That was the short answer.

“Eternals” is directed by Chloé Zhao. Zhao has only directed three other movies, mostly centered on individuals dealing with internal conflicts and rediscovering themselves. Her most recent work, “Nomadland,” won three Oscars, including Best Motion Picture of the Year, Best Performance by an Actress in a Leading Role, and Best Achievement in Directing.

Having destroyed the last of the Deviants in 1521, the Eternals’ leader Ajax has the team live among humans until their Celestial leader, Arisheim, orders them back. In the present, two Eternals members, Sersi and Sprite, are attacked by a new, powerful Deviant called Kro. Realizing that the Deviants are still alive, the two will travel across the globe to find the rest of the Eternals, who are living different lives among humans.

In addition to finding the remaining Deviants and an evolving Kro, the Eternals must stop the looming Convergence, a cosmic event that will annihilate all life on Earth. At this point, Earth has been the center of eight cosmic threats in this Marvel Universe alone. Why us?

“Eternals” is the next step into the cosmic side of the Marvel Comics lore. Without any previous MCU film to introduce them, the Eternals is a very unfamiliar group, even with most comic fans. It also opens up more about the Celestials, massive, godlike beings that make our planet look like a beach ball. Kurt Russell’s Ego from “Guardian of the Galaxy Vol. 2” as well as the Guardian’s leader Star-Lord are descendants of these beings, and it’s well hinted that the Celestials will be included more, specifically with the Eternals.

The cinematography is beautiful in this movie. The final battle is a massive battleground with a bursting volcano, and the visuals are awesome to see on the big screen. In the many flashbacks to Babylon and Mesopotamia, each location looks different and obvious to where (and when) the movie is taking place. There are a few scenes of one or two of the Eternals talking to the mammoth Celestials, and the size comparisons are intense; the human-sized characters are merely a fraction of the Celestial Arisheim’s face. It’s Marvel and they’re usually good at making their films spectacular to look at.

The acting is decent; there wasn’t anything that really stood out for me. The actors played out their characters for what time they had on screen, which wasn’t a whole lot for one character. There were 10 main characters in this superhero team so even the film’s 157-minute runtime (whew!) didn’t have enough running time to fully establish everybody.

Probably the biggest talk of this movie currently is that it is the lowest scored of MCU movies with popular review sites. At this moment, Rotten Tomatoes has it at 47% rotten, and Metacritic has it at a score of 52/100. To put it in more perspective, “Thor: Dark World,” what many considered to be the worst of the Marvel Cinematic Universe, is scored at 66% on Rotten Tomatoes and 54/100 on Metacritic. And if you want something outside of Marvel, Sylvester Stallone’s “The Expendables,” another team-based film, was 42% on Rotten Tomatoes, and 45/100 on Metacritic.

But the review sites have spoken! Praise to the Rottenest of Tomatoes and go with the blessings of the Metacritics and their wisdom!

If you’re not detecting the sarcasm there, I care very little when it comes to these sites. They’re websites based on averages, and I hate math.

They are useful sometimes, especially when you’re undecided on a film. You can access these sites and get a general idea of what you’re in store for. But the majority of these scores that these sites give you are based on what professional critics and reviewers give you. While these pros have a lot to talk about when it comes to movies, a lot of them are just snobbish, for lack of a better term.

If you like using these sites, that’s fine, but you should read the reviews that gave these movies their scores. You’ll find a lot of them laughable, way off-topic, or just confusing. Some reviews even sound like they didn’t even watch the movie.

Ranting aside, I’m not saying “Eternals” is fantastic and that every nay-sayer is lying to bring Marvel down. It’s a fun comic book movie, and the 157 minutes didn’t feel that long, thankfully. DC’s “Justice League” felt long, and that was before the four-hour-long Snyder Cut.

“Eternals” does have its fault, though. Much like the already mentioned “Justice League” and “Batman V Superman,” this film has the problem have introducing a bunch of new characters for the first time. With the addition of most viewers never hearing of this superhero alien team, the movie has to rely on expositions to give a quick intro for most characters, and remember, there are 10 of them.

The film also has to introduce the Eternals’ purpose on earth, while also introducing a whole new problem that they must gather back for. Oh yeah, and they have to go all over the world to find everyone to team up. Even with this long run time, that’s still a lot of ground to cover.

I think the biggest problem is that they went with making this a movie, especially now that Disney Plus is taking off with four successful Marvel TV series. This movie feels like it would have been better content for a six- or nine-episode series, taking more time to develop the film’s conflicts, the individual characters, and their personal problems.

Sit down, everybody, it’s a Marvel movie. You know there’s more during and after the credits. They’ve been doing this for 13 years now. Marvel keeps fans in their seats with TWO more scenes: a mid- and post-credit scene. Both introduce future characters, a mysterious yet familiar voice off-screen, and what’s coming next for the Eternals.

Marvel’s “Eternals” is currently in theaters only.