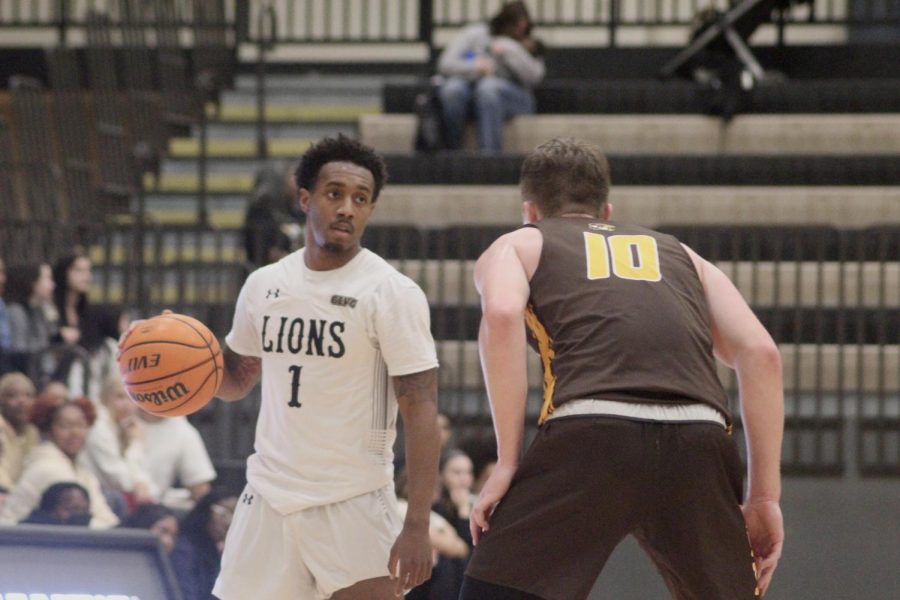 Junior guard Jacoby Ross looks for a teammate to pass to while being defended by Quincy's Nate Shockey in a matchup against the Hawks on Dec. 2.

The men’s basketball team came away with a win in an overtime-thriller to beat Quincy 91-87 on Thursday.

Lindenwood got off to a strong start in the second half. Senior forward Romelo Burrell, senior forward Brandon Suggs, and senior guard Jacoby Ross scored seven points combined to tie the game up with 18 minutes left.

Both teams traded shots back-and-forth, keeping the game close. The Lions struggled to gain rebounds, causing them to trail by eight with six minutes left in the game.

After a layup by Caldwell, Burrell followed with a block that led to Caldwell scoring another layup, decreasing the lead to five. The Lions continued to struggle rebounding with less than two minutes left in the game.

Junior guard Brandon Trimble hit a three to keep the game alive. After Quincy scored, Suggs scored on a layup and drew a foul to go to the free throw line.

Ross drained a three-pointer to give the Lions a two-point lead. Quincy attempted to tie the game again, but Burrell kept the Lions ahead with a jump shot.

Ross racked up 24 points and two assists. Caldwell and Burrell both scored 21 points each.

The Lions will host the University of Missouri St. Louis on Saturday at 3 p.m.