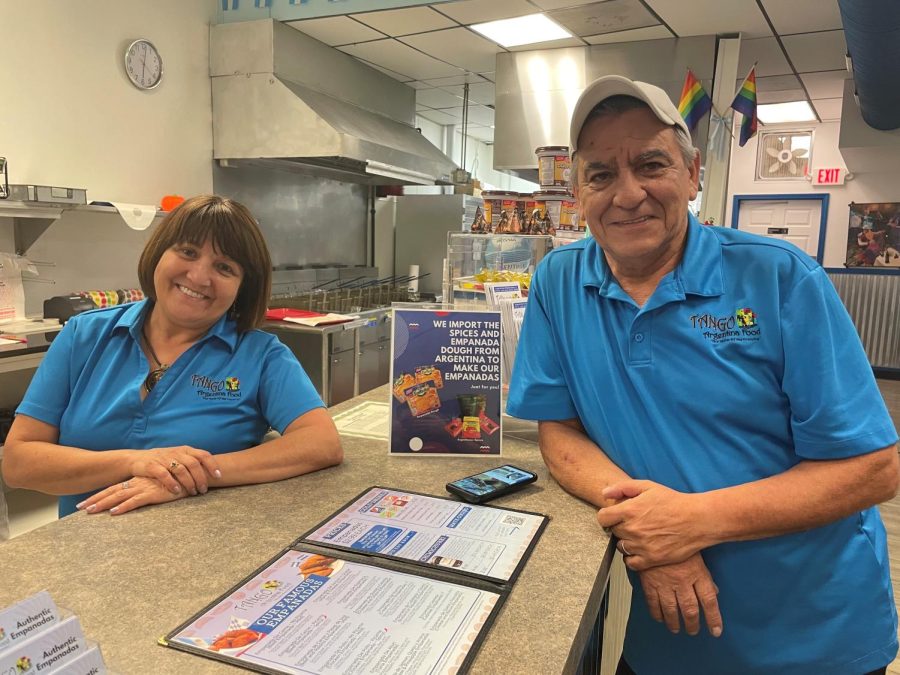 Stella and Hector Aberastury in their kitchen in their restaurant, Tango Argentinian Food, which is located in Saint Charles.

Tango Argentinian Food opened their family restaurant a few months ago near the Saint Charles’ Fuzzy Taco and Goodwill store off the corner of West Clay Street and Droste Rd.

“We are the only one,” co-owner Stella Aberastury said. “Nobody makes Argentinian food in all of Missouri.”

Stella and her husband, Hector, opened their Argentinian restaurant on Sept. 2.  They started making Argentinian foods in 2000 for Hispanic festivals in Missouri. Soon after, they decided to start their own business as a carryout store in 2016. They opened their new family-owned, family-run restaurant this year, and it is within walking distance of the Lindenwood University campus.

Their main dish is the empanada, which the couple explained is the most traditional of dishes in their country. Their menu includes 14 different combinations of their new empanadas, and they also sell Argentinian spices and sweets. The restaurant is also working on a liquor license to sell beer and wine from Argentina, according to Hector.

“They call me ‘the Empanada Man,’” Hector said. “The people know me for empanadas.”

As ‘the Empanada Man,’ Hector takes great pride in his trade. Everything is made-to-order and done by hand. Hector opened the kitchen area up for the customers to see the cooking as they wait.

“It’s different from other restaurants; you never see the kitchen,” Hector explained. “Because you are here, you can see everything, no secret.”

The Aberasturys immigrated to the U.S. with their two children in 1995.  Originally from Buenos Aires, they made a living working for a local bank until it closed down and left them broke. Hector’s mother, who was already living in the United States, suggested immigrating to the U.S. After getting all of the papers needed, including their marriage certificate, they got their green card.

“So thanks to his mom that we could come to this country,” Stella said. “We were very lucky.”

Once in America, the Aberasturys would spend the first few years working in different fields, such as delivering newspapers, cleaning, and heating. After traveling from Miami to St. Louis, the duo would be invited to the Hispanic festival and introduce their empanadas to the Midwest.

“We never think we make empanadas in the United States,” Hector recalled.

Despite opening during COVID, Tango’s opening has been very successful. According to Stella, they’ve made a lot of customers in the past 20 years, and that helped with opening their bigger restaurant during the pandemic.