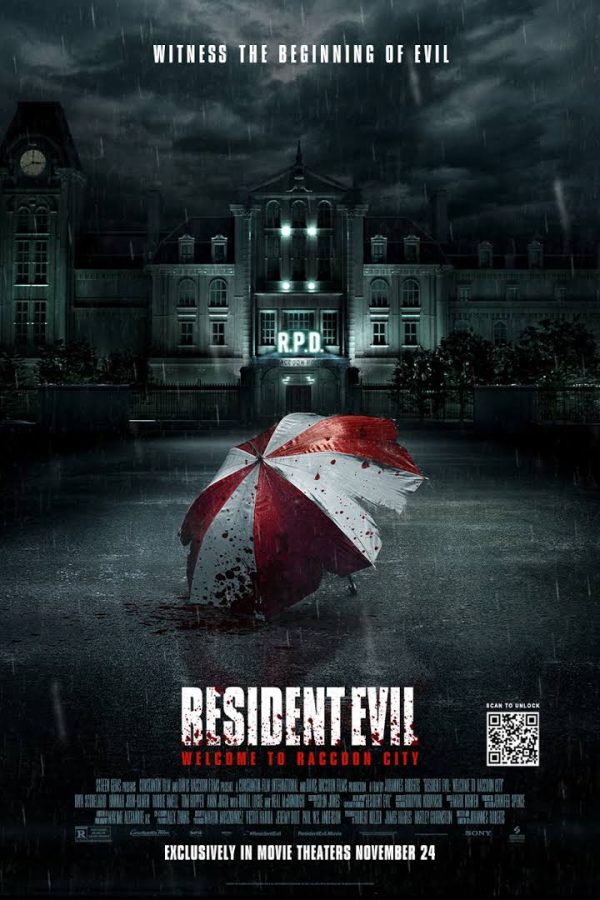 Oh no, not another “Resident Evil” movie! Didn’t this franchise die already?! Ohhhhh… so it’s not part of the earlier “Resident Evil” movies? No Alice or super-powered main characters with outrageous fight scenes? No wasting characters from the source material to just sit in the background and stare at Alice’s god-like abilities while being completely useless the whole time? …You promise?
“Resident Evil” is Capcom’s zombie-shooting video game series. The games are filled with hordes of zombies, mutant animals, monsters, and bigger monsters. From 2001 to 2015, there were six movies adapted from the game series, all starring Milla Jovovich. They’re… not very good. Really, not at all. They’re fun to laugh out, but for fans of the games, it’s mostly dumb.
“Resident Evil: Welcome to Raccoon City” was directed by Johannes Roberts. Roberts’ films are all mostly horror-based. The majority of them involve stalking monsters like in “Storage 24” or predatory animals like sharks in “47 Meters Down.” The “Resident Evil” games are known for their monsters and killer animals, so Roberts is a reasonable choice to helm a movie adaptation.
“Resident Evil” stars Kaya Scodelario (“Maze Runner” series) as Claire Redfield, Robbie Amell (Amazon’s “Upload”) as Chris Redfield, Hannah John-Kamen (“Ant-Man and the Wasp”) as Jill Valentine, Avan Jogia (“Zombieland: Double Tap”) as Leon Kennedy, Tom Hopper (Starz’s “Black Sails”) as Albert Wesker, and Donal Logue (FX’s “Sons of Anarchy”) as Chief Brian Irons. Neal McDonough (HBO’s “Band of Brothers”) plays William Birkin, the leading scientist of the Umbrella Corporation.
It all begins on a rainy night all the way back in 1998. Claire Redfield has returned to Raccoon City to meet with a conspiracy contact and her brother, Chris, who works for the police specialized unit, STARS Alpha Team. Chris is sent with his team to investigate the disappearance of their other unit, Bravo Team, last seen in the forest.
The citizens soon mutate into zombies and overrun the city, now cordoned off by Umbrella operatives. Claire finds shelter in the city’s police station with the rookie cop, Leon Kennedy; meanwhile, Chris’ team finds a mansion in the middle of the forest that’s connected to the outbreak. Both groups soon discover that they must escape the city limits before the Umbrella Corporation destroys the city to destroy all evidence of its involvement.
So, was this worth remaking? Well… to be fair, it depends. To me, it’s okay. I enjoy the movie and liked seeing Easter eggs and callbacks to the game. It’s much better than the earlier movies, but I don’t think there’s much competition.
The acting is fine. The actors come from good movies and shows, but the script didn’t require any serious or emotional acting. Even the minor characters put on a good show before turning into zombie chow.
The main thing that makes this movie worth watching is how much it’s like the “Resident Evil” video games. The film intertwines the first two games’ stories into one narrative while bringing a new atmosphere to the decaying city of Raccoon City. Now declared a ghost town, the only inhabitants are government workers and those too poor to move. It also rewrites some characters to bring a stronger connection to the villainous Umbrella Corporation, a pharmaceutical conglomerate that secretly experiments with viruses and humans for biological weaponry.
The film also brings in a lot of Easter eggs or hidden images that reference video games or other movies. Recently, Capcom made remakes of “Resident Evil 2” and “Resident Evil 3,” and the film references several nods to those games, such as toys, orphanages, and scenery. Some sets like the police station are even designed based on settings from those games.
Computer-generated images, or CGI, were used in the movie, and it’s pretty obvious. Ironically, some of the monsters from the video games look like they were inserted right into the movie. Not sure if that would count as a homage, or if it’s just laziness. Although some creatures, like the skinless, elongated-tongue-lashing Lickers (yeah, kept them up all night to think up that name) look pretty cool; but the zombie dogs and this final hulking monster at the end look so animated that Sonic the Hedgehog looks real. Money and time could have been a problem with the CGI (I think it usually is), but it’s just a shame.
“Resident Evil: Welcome to Raccoon City” is an improvement over the last six films, if you haven’t picked up on that yet. That doesn’t make it a great movie, but at least it’s a step in the right direction. It’s fun enough to watch. It also appeals to the games’ fans and to zombie fans who prefer the horror aspects of zombie films over action-based ones. With a bit more tweaking, I think that this “Resident Evil” film could have been a pretty damn cool movie.
There is a mid-credit scene, although it is hard to explain without going into video game lore. Uhh, potential sequels with people in glasses and trench coats!
“Resident Evil: Welcome to Raccoon City” is currently playing in theaters.