How Division I move went down, and what it means for the university

What's next? How the move to the next level will affect Lindenwood as a whole. 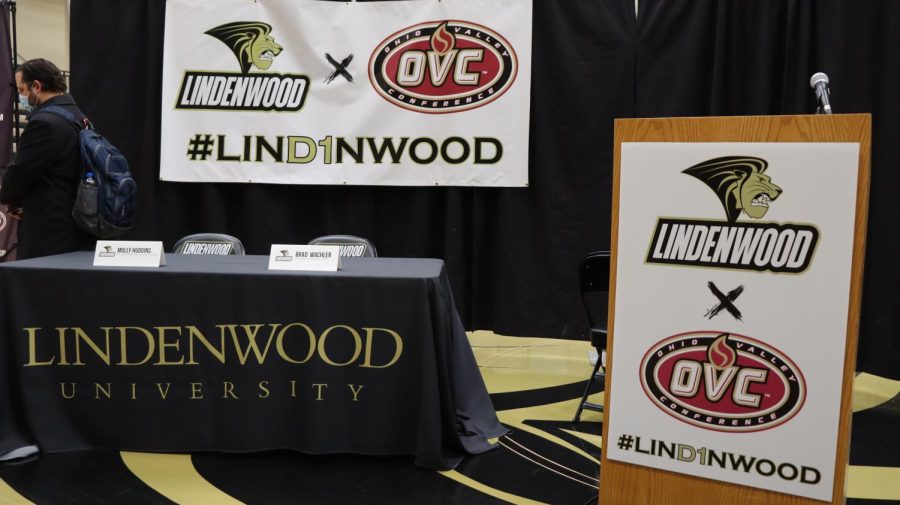 Lindenwood University’s move to Division I has opened the door for 18 teams to play in the Ohio Valley Conference next season, while other Lindenwood sports are looking for new conference homes.

Sports such as men’s soccer, men and women’s lacrosse, swimming and diving, field hockey, and wrestling are not included in the OVC, forcing each team to find a new conference. Brad Wachler, Lindenwood’s vice president for intercollegiate athletics, said the university is talking with conferences.

“I’ve started those conversations,” Wachler said. “I’ve had parallel discussions here in the last couple weeks with some conference commissioners. So we don’t have anything solidified yet, but we’re working on that. Again, a big priority for me right now.”

Starting in 2022-23, the university will be adding a beach volleyball program, which will also be joining the OVC.
How the move happened
Wachler said the move to Division I had been in the works since the month of August, when the conference reached out to see if the university would be interested in switching divisions.

After the Ohio Valley Conference reached out, the process took a few months to complete.

“It took a little bit of time, just because you have to go and fully evaluate it and look at the financial model. Does it make sense, what are some of the things we’re trying to accomplish on the other side,” Wachler said. “It took some time to build the financial model, and then to work with an external company to validate that model.”

By December, Wachler and others began to feel good about making this move. It wasn’t until the Board of Trustees meeting where they received the final vote, though, when the university knew for certain that this transition would be happening.

Once it became official, and the press conference had been held, the media attention swarmed the university. Local news stations and publications, outside media outlets, all turned their attention to the Division II school that was heading to the next level.

Over the next couple of weeks, Wachler said that he will be meeting with coaches to determine the exact number that each team will be provided with.

“There will be an increase in scholarships for each sport,” Wachler said. “We are working on it, and that’s what I’m meeting with our coaches right now over the next couple weeks, to talk about specifically where they will be from a scholarship standpoint because that’s a big piece for them. That impacts recruiting, so we’re still working through that.”
Financial impact of the transition
A question that has been raised after the announcement last week is how much will it cost for Lindenwood to afford this move, to afford this increase in scholarships, and everything else that comes with it.

Wachler declined to state the exact amount that the university is having to spend for this, but he did mention that the process is still ongoing.

“It’s a fluid process and we’re going to continue to evaluate it because the financial amount needs to continue to make sense for us as we move forward but I’m still working with our coaching staff and trying to dive into it with them,” Wachler said.

He added that coaches are still yet to see what their budgets will be, or what the final numbers are either.
How this will affect facilities
In terms of facilities, the university will be in need of a home for its beach volleyball team once the move takes place and the team is added on campus. Wachler said there is still work to be done to determine this, but progress is being made.

“There’s potentially a new facility that may be built,” Wachler said. “Not something that’s owned by Lindenwood, but within the community so that could be an option down the road. But there’s several facilities around here that we will be able to access, but we have not solidified that yet.”

Wachler mentioned that Hunter Stadium and Hyland Arena will not be in need of significant upgrades in order for Lindenwood to be a Division I caliber school. His preference is to have a smaller facility that fans are able to fill and pack, and create a strong home environment.

When looking ahead to the future, Wachler was open to minor changes to some areas around campus and in athletics.

“There will be some modifications that we have to make to some facilities,” Wachler said. “We’re still trying to assess nothing that I would say is super significant and some that may be fundraising initiatives, but facilities in this day and age is an arms race so everybody is making improvements and modifications, and so we’ll have to continue to assess and do the same as we move along.”
What the move means for recruiting
Recruiting is an area that will experience some of the biggest positives as a result of moving to Division I. Lindenwood is now the only university with a Division I football team in St. Louis, and the first school to have a team at this level since 1949 when Saint Louis University had a team.

In lacrosse, Lindenwood becomes the only college in all of Missouri to have Division I teams in the sport. Wachler said that the men’s team has already seen some of the benefits of the move after just one week.

“There’s going to be an incredible impact on recruiting,” Wachler said. “If you even look at our men’s lacrosse team, they’re the only Division I men’s lacrosse program in the state of Missouri. Our lacrosse coach told us after the press conference, he got about 70 emails from recruits wanting to come play here.”

“It gives you more cachet as a Division I program and prestige, and you’re ability to go out and recruit these kids and garner interests that we may not have been able to garner in the past. While we’re going to very much focus on St. Louis, we’ll have a national reach so I think we’re going to see a significant uptick in recruiting.”
Impact on the university as a whole
Outside of sports, the university sees moving to Division I having a large impact on enrollment going forward.

“If you look at it, there is empirical evidence that shows you can have anywhere from an upwards of a 15 percent swing in enrollment from transitioning from Division II to Division I,” Wachler said. “We’re looking at this as an opportunity to rebrand ourselves, and to reposition ourselves on the market.”

Wachler made it clear that the move wasn’t a move to affect sports on campus, but rather the university as a whole.

“This is not an athletics department initiative, this is a university initiative,” Wachler said. “I think it’ll have a significant impact on the classroom. We have great faculty here, we have great programs, we’re going to continue to have great programs. But I think we’re going to recruit some really strong students and I think some kids that may not have been interested in Lindenwood in the past, they have a renewed perspective on what we are.”

Lindenwood will start competing in Ohio Valley Conference regular seasons and tournaments in 2022-23, but will not become a full-fledged Division I until 2026. Until then, the Lions will be ineligible for automatic bids to NCAA tournaments.