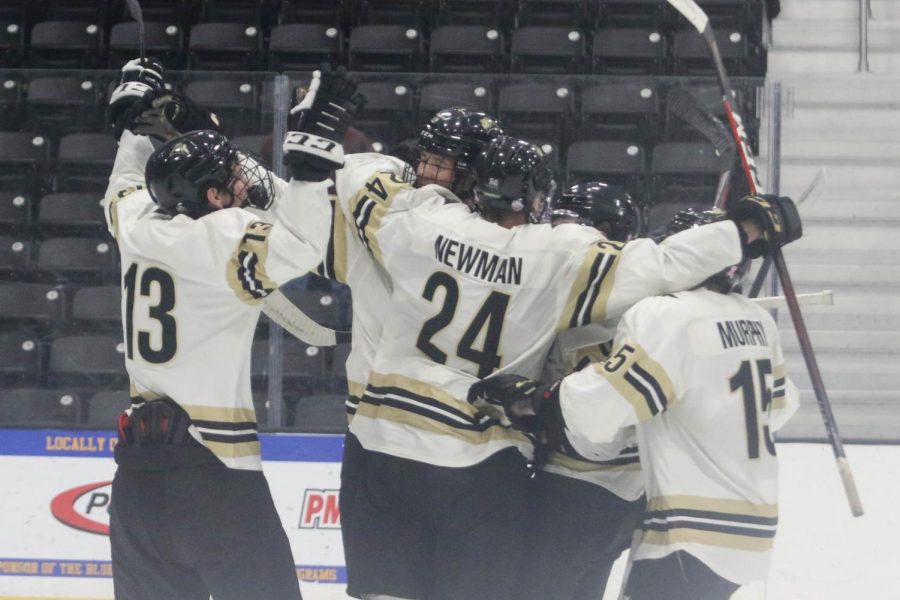 The men's ice hockey team celebrates during their game against Michigan-Dearborn on March 11 at the Centene Community Ice Center. The Lions won the game by a final score of 8-3.

Updated on March 18 at 10:14 p.m. with confirmation from President John R. Porter.

Bally Sports Reporter Andy Strickland first reported that the move would be happening, tweeting out on Saturday that he had been told the team was going Division I.

In a story published by College Hockey News, former Vice President for Intercollegiate Athletics Brad Wachler also confirmed that the transition was in the works.

Last year, the program was close to a Division I move but reportedly couldn’t reach its fundraising goal of $5 million, Wachler said in the interview. This led to the university looking at other options, a search that Wachler said began in August.

Strickland said that Porter told players and coaches last Friday that they would be heading to Division I.

Porter said in the email that a formal announcement will be made on Thursday, March 24. It will be made at the Lindenwood Night with the St. Louis Blues.

The move comes weeks after it was announced that Lindenwood would be going Division I, and days after Wachler’s departure.

The men’s team is coming off its fourth American Collegiate Hockey Association, or ACHA, national title. Lindenwood defeated the University of Central Oklahoma 8-3 on Tuesday night.

More updates will be included as they become available.