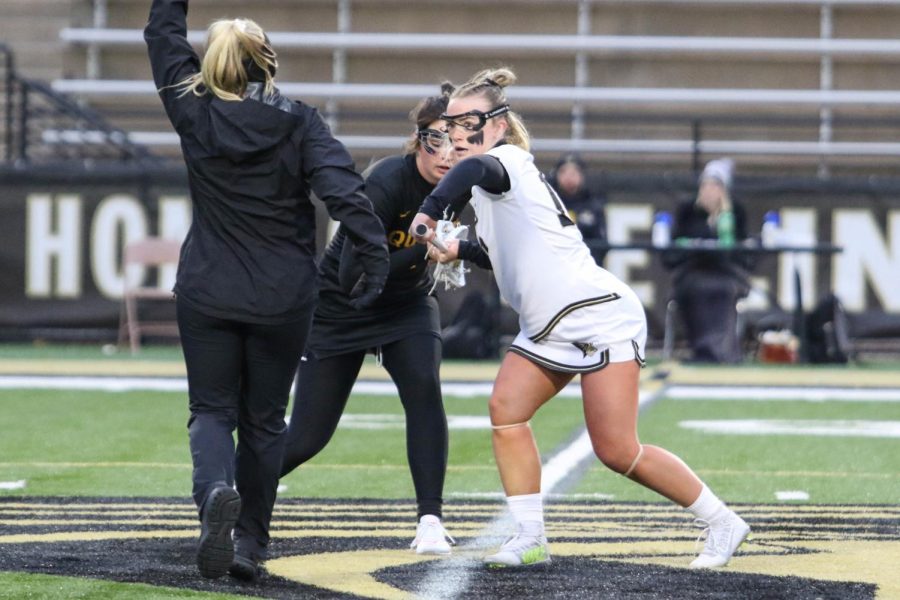 Midfielder Zoe Totland participates in a draw against Quincy University at Hunter Stadium.

In their final year at the level, numerous teams across Lindenwood are looking to make one last national run in Division II.

Men and women’s lacrosse are both heading to Indianapolis, Indiana, on Friday for the GLVC Championships. Both teams will be taking on Rockhurst University in the semifinals.

Lindenwood out-scored the Hawks 36-14 in the two meetings and holds a perfect 10-0 record vs. Rockhurst all-time.

The men’s team went 10-3 overall in the regular season and had a 5-1 GLVC record. Lindenwood will face Rockhurst at 7 p.m. CST in what will be the third meeting this season between the two programs. The Lions tallied a dominant 20-8 win on Feb. 19 at home against the Hawks in the first game.

In their final game of the regular season on April 23, Rockhurst bounced back and earned an 11-10 overtime victory against Lindenwood in Kansas City, Missouri. The Hawks scored the game-winning goal just 25 seconds into the overtime period.

At the NCAA level, the women’s golf team has earned an at-large bid for the 2022 NCAA Division II Women’s Golf Championships. Lindenwood will be competing as the No. 6 seed in the East Region, which consists of 15 teams.

Lindenwood earned a tournament bid after a semifinal appearance in the GLVC Championships from April 22-24 in Waterloo, Illinois.

The Lions will tee off on Monday at the Shoal Creek Golf Course in Kansas City, Missouri. Individually, Lindenwood will send five golfers to the regional competition, with the five being McKenna Montgomery, Noelia Rodriguez, Addasyn Zeller, Kassidy Hull, and Alexis Montgomery.

Regionals will go from May 2-4, with the four locations being Davie, Florida, Hot Springs, Arkansas, Stockton, California, and then Kansas City. The top five teams from each region will compete in the national finals from May 10-14.

Lindenwood’s softball team is also in a strong position heading into their final weekend of the regular season. With a 33-7 overall and 20-4 GLVC record, the Lions currently sit third in the conference behind Southern Indiana in first, and Indianapolis in second.

The 33 wins are the most the program has had since the 2009 season when Lindenwood finished 36-27.

The Lions will host No. 2 Indianapolis on Friday at 4 and 6 p.m., before concluding the regular season on Sunday at 12 and 2 p.m. vs. No. 16 Southern Indiana.

The GLVC Championships will begin on Thursday, May 5, in East Peoria, Illinois.