Sibley Cemetery: have some bodies been forgotten? 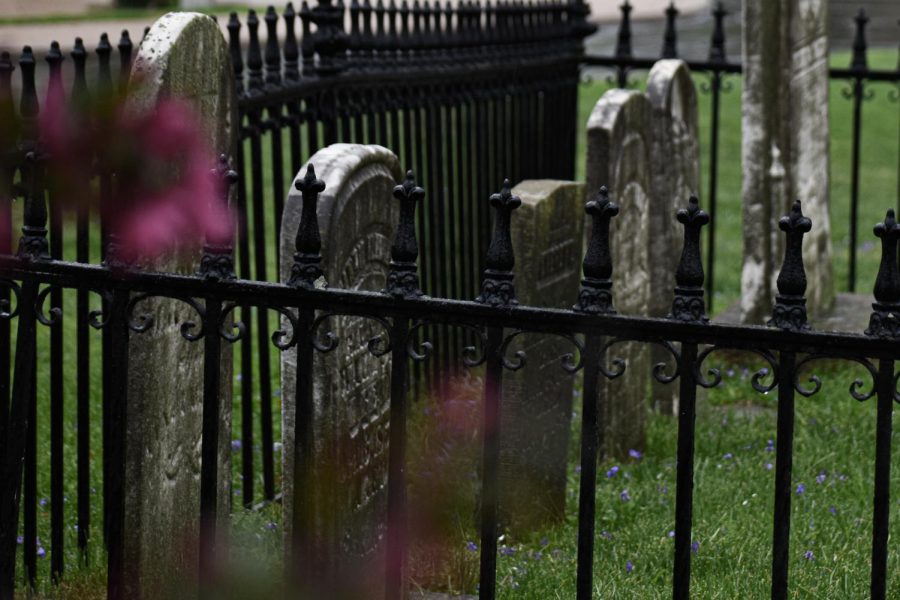 The graves residing within a fence inside the Sibley Cemetery. The graves date back to the early 19th century.

Lindenwood students, staff, and visitors on the campus grounds are greeted with the sometimes disturbing sight of gravestones at the Sibley Cemetery.

As the remains accounted for are claimed to be in the cemetery or possibly removed, one theory can make the site feel all the more frightening.

This supposed theory is that forgotten remains on campus can be right under everyone’s feet at any time, as unmarked graves and other mistakes may not have been accounted for, and there is no known way to disprove it.

Lindenwood Archivist Paul Huffman said that while some graves are said to have been moved to other cemeteries, there aren’t any documents to prove this. To his knowledge with the documentation at hand, most of the graves are placed in the cemetery.

Meanwhile, Lindenwood professor Jeffery Smith believes that there are bodies that might be left on the campus grounds that have not been accounted for.

“There are probably more we don’t know about,” Smith said, “when they closed that cemetery down, did they move all the bodies? Maybe? Bet they didn’t. I betcha a nickel they didn’t. That’s just how it is with these cemeteries,” Smith said.

Smith focuses his research on death studies and instructs classes circling death and people’s interactions with cemeteries and other more “morbid” topics. He, and other professors in the field, will allow students to understand the campus cemetery, which led to his knowledge of the probability that there may be bodies still resting on campus that are left unmarked and unknown.

Smith said that the school and property were given to the Presbytery in the mid to late 19th century with the cemetery being used through the 1860s. During that time period as towns were growing and expanding, many cemeteries were removed with graves supposedly dug up.

“(The Presbyterians) probably decided to quit using that as a cemetery space, they may have left the people that were there and those that wanted to move moved,” Smith said.

In this time period, the workers who dug up and relocated the graves were hired almost daily. Despite no records of the bodies being removed existing, it was not uncommon for those moving the graves to leave some remains behind. Smith said that this same problem could have happened with the Sibley Cemetery.

“(The workers) sometimes take the jobs, go to the site, and say ‘well the ones that are marked are the ones we’re going to dig up,’ or they say ‘oh it’s the end of the day, its, hot’ and these guys go out there, throw some of the dirt and rocks in the box, hammer it shut, call it good, and ship the box off to the place it’s going to get buried in and it goes in that stack. So bodies get left behind, that’s just a fact of the matter, the unmarked ones can get left behind,” Smith said.

With slavery legal in Missouri before the Civil War in the 1860s, Smith said that the Sibleys themselves owned slaves also buried where Lindenwood University now stands. Two of the enslaved, one who appeared to be freed at one point and one who died enslaved, were buried near the cemetery in unmarked graves.

It may not be known how many bodies may still be on campus, or if there are any at all. Smith explained that the 19th century had higher mortality rates than the 21st century, which means more graves were dug and more bodies were laid to rest, which could pose the question of if some graves of the less memorable may have been left behind.  The answer to that may not be known within the lifetime of the members of the campus community today but can make students feel just a little bit more cautious of disturbing the dead when walking to class.