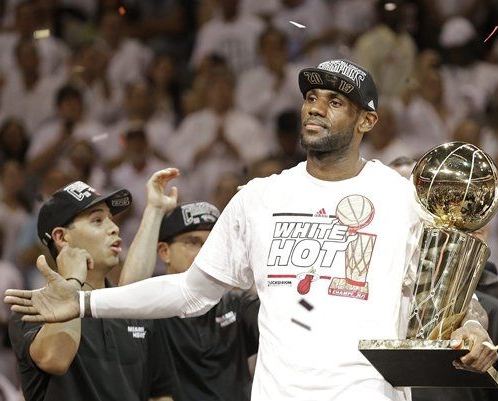 The Miami Heat won their second consecutive NBA championship on Thursday night, June 20, in Game 7 of the NBA Finals against the San Antonio Spurs by a score of 95-88.

This year’s NBA Finals received the second-best television rating for the NBA’s championship series in the history of its existence, and boy did it deserve it.

Arguably the two best teams in the league during the regular season (the only team that could have opposed the Spurs in the Western Conference was the Oklahoma City Thunder, but their thunder died when their star PG, Russell Westbrook, went down with a season ending injury in the playoffs) met in the Finals to decide who would be this year’s championship. The series ended up being what every sports fan hoped it would be: incredibly competitive, exciting and fast-paced.

The best of seven series wasn’t decided until game 7 in Miami; throughout the series when one team seemed to grab the advantage in the series and be racing toward the title, the other team would grab the next game in spectacular fashion. Neither team had won two consecutive games in the series until Miami came back from a 3-2 series deficit to win the title with back-to-back wins in games 6 and 7 on their home-court in Miami.

James has won the league’s regular season Most Valuable Player award four out of the last five seasons.

What I am about to write has taken a lot of thinking and internal back-and-forth. I have never been a LeBron James fan and if I am being completely honest, I have never really cheered for his overall success as an NBA player. I have always acknowledged his incredible talent and play-making ability, but there was something about LeBron James “the person” that made me cheer against LeBron James “the player,” often in a very passionate way.

As I reflect on this, I think my slight disdain for “King” James began on a warm summer’s night in July three years ago at my family’s home in Dallas, as I watched ESPN’s coverage of LeBron’s “decision.” If you don’t remember LBJ’s “decision,” it was an hour long television feature on ESPN in which the free-agent James announced which team he had signed to play with for the next few years in a very heated and rumor-filled free-agency period.

A television program like it had never been run before, and I hope another one is never run again, either for LeBron or any other player in any other sport. Years later I recognize that ESPN probably coaxed LeBron into participating in the program pretty hard, but for a while I was absolutely appalled that he agreed to it.

I knew then how great LeBron James was on the basketball court, and he was one of the guys that I really enjoyed watching objectively just because he simply played beautiful basketball. Also, he was a kid from Akron, Ohio, who was signed straight out of high school by his hometown team, the Cleveland Cavaliers. LeBron always spoke about how awesome it was playing for his hometown team, as well as his desire to bring home an NBA championship to the city of Cleveland.

But on that warm summer’s night in July, that promise vanished as LeBron James announced to the millions watching his “decision” that he would spend the next few years of his career wearing a Miami Heat Jersey. James felt that heading to Miami to join forces with fellow superstars Dwayne Wade and Chris Bosh gave him the best chance to win the coveted NBA title that marks the success of the league’s greatest stars.

After failing to win a title his seven years in Cleveland, LeBron packed up his bags and headed to Miami, leaving the city of Cleveland with millions of broken hearts.

I couldn’t believe what I was hearing.

I was in utter shock and the city of Cleveland, rightfully so, was too. Alas, there was plenty of hate exercised towards James by those angry fans for weeks, months and years following the broadcast. Much of that hate still exists for fans in Cleveland, and it will probably never evaporate.

With all hate aside, here we are three years later. LeBron and the Heat have been to the NBA Finals three straight seasons and have two rings to show for it. LeBron, for the most part, has stepped up to the challenge in the times when his team has needed him most, and he has done an incredible job ignoring and disproving the barrage of “haters” that publicly and vehemently hoped for his failure (myself included).

And in my opinion, he’s gone about it in the right way. He’s never lashed out publicly, and has been working extremely hard behind closed doors on improving his game, and it’s evident. James is three times the jump shooter he was in the early stages of his career (the statistics tell the tale). Each season it is evident that James has worked on his game in the off-season and has taken it to another level. The only question that remains is, how high will he end up taking it?

With four NBA MVP’s, two NBA titles, and two Finals MVP awards, along with a host of other honors, LeBron is well on his way to being one of the NBA’s all-time greats, whether the “haters” like it or not.  James has joined the likes of the greatest player of all-time, Michael Jordan, and Bill Russell as the only players to win back-to-back regular season MVP’s as well as NBA Finals MVP’s.

He will have to continue to excel year in and year out as he nears the age of 30, but it can be done. From a pure basketball perspective, it has been absolutely exhilarating watching LeBron’s development and I look forward to watching him over the next few years to see just how he will cement his legacy as an NBA player. My guess is, with all off-court antics aside, folks will have to admit he is one the best basketball players of all-time.