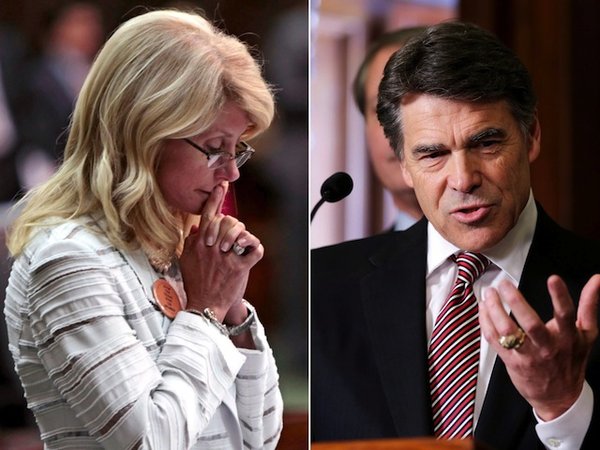 Sen. Wendy Davis and Gov. Rick Perry have been praised as heroes within their respective parties. Davis led the fight against Perry's charge for new legislation. Photo taken from politix.topix.com.

The Texas House voted on Wednesday to advance legislation HB2, which would ban abortions after 20 weeks and require abortion facilities to update to the standards of an ambulatory surgical center.

Proponents of the legislation feel that it better ensures the safety of the unborn child and the pregnant woman while critics argue that the new restrictions could close 37 of the 42 abortion clinics statewide.

State Sen. Wendy Davis (D) successfully filibustered the House State Affairs Committee during the first special session on Tuesday, June 25. She wore running shoes and a back brace to support herself throughout the 11-hour delay, as any leaning would have broken court rules and ended the filibuster.

The committee attempted to vote on the legislation with approximately 12 minutes remaining before the midnight deadline. Due to the noisy crowd, the results of the vote were not known prior to the completion of the session and the legislation was temporarily defeated.

Davis’ filibuster made national headlines and the senator has since received praise from Democrats nationwide, including President Barack Obama. Her efforts also received negative attention, including insult-laden commentary from the Texas governor.

Gov. Rick Perry called for another special session to allow the committee more time to consider the legislation. The second session began Monday, July 1, and more than 1,100 people registered to testify. The committee limited public testimony to eight hours and fewer than 100 witnesses had the chance to speak. Testimony ended shortly after midnight and an 8-3 decision was reported early Wednesday, July 3, to advance the bill.

The bill then went to the full chamber, where it was debated for more than 10 hours on Tuesday, July 9, during which every proposed amendment to the bill was rejected. Rep. Sarah Davis was the only Republican who said the bill as written is unconstitutional and she was one of many lawmakers who offered an amendment.

She was the only exception to the party-line vote that passed the bill through the House on Wednesday, July 10.

The bill will next go to the Senate Committee on Health & Human Services for review. From there, the entire Senate will vote whether to pass the bill before governor action. Because the Texas Legislature is Republican-controlled, the bill is expected to move very quickly through the Senate.

Opponents of the bill say it conflicts with the U.S. Supreme Court’s 1973 Roe v. Wade decision. Similar restrictions in other states have been blocked by federal judges, giving Democrats hope as the legislation moves toward enactment. A federal lawsuit can be expected if the bill becomes law.