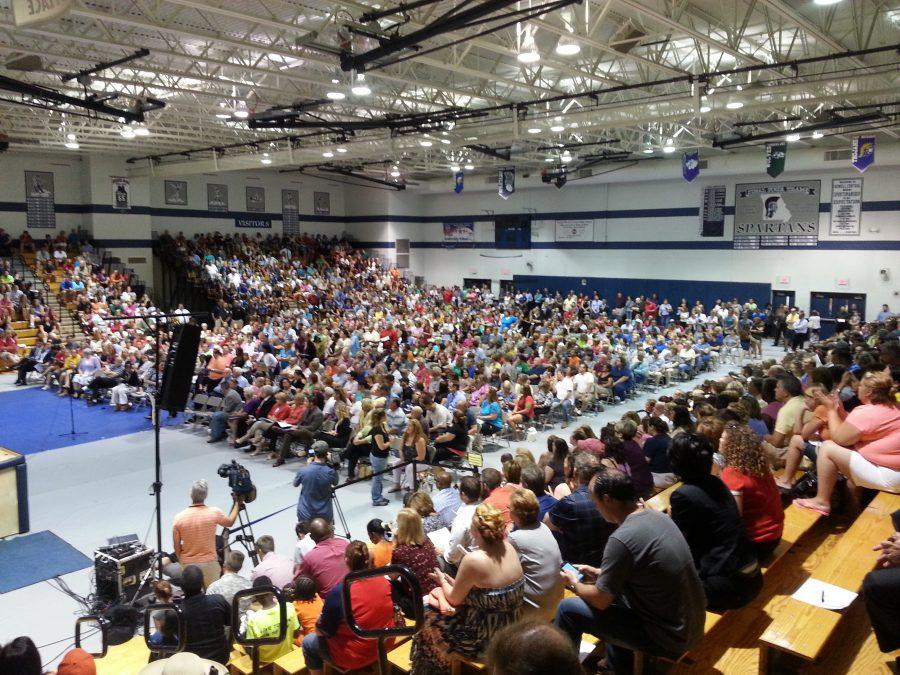 The Francis Howell Central gymnasium was packed with community members for the town hall meeting on July 11. The meeting was attended by an estimated 3,000 people

Parents approached the board with an array or questions and demands. Many parents took their turn at the mic, the meeting that was originally scheduled for 6 p.m. to 7:30 p.m. stretched until just before 9 p.m.

Controlling potential violence seemed to be the biggest concern in the minds of FHSD parents.

“We’re not talking about loss of accreditation because of facilities, or even the teachers, but because of violent behavior,” one concerned parent said. “I want to know where the metal detectors are going to be.”

Much of the estimated 3,000 people packed into the FHC gym agreed with the parent, cheering her on as she spoke of protecting her three children in the district.

Some parents, like one Normandy mother, asked the crowd to be accepting.

“I grew up with this and don’t want it for my daughters,” she said. “I promise that if you met my girls, you would love them. Not all students are the same.”

The town hall meeting was in response to the Missouri Supreme Court ruling earlier this month that will allow students from the unaccredited Normandy School District to apply for transfer to FHSD.

Board members tried to address all concerns to the best of their ability, but Superintendent Pam Sloan urged the crowd to understand “The Francis Howell School District has not chosen any of this. It is something we too must deal with and work on.”

The school district is allowed to set a desirable amount of students per classroom. For FHSD, those numbers are 20 for grades kindergarten-second, 22 for third and fourth, 25 for fifth and sixth, and 28 for seventh and beyond.

Because the district will not know their own enrollment until August 1, the board was hesitant to estimate how many Normandy students would be accepted.

Sloan estimated anywhere from 400-1,000 of the 4,800 Normandy students could be accepted. 150 students had already applied for transfer before the meeting was held.

Many parents understood that the decision was out of the hands of the board, but made it known that this was not a solution.

“Francis Howell is the bandaid on the wound of Normandy,” one parent told the board.

Another mother offered her own solution. Why not send an entirely new staff to the Normandy School District instead of sending them here,” she said. “Send new teachers, counsellors, everyone. The whole group needs to be fired and rehired.”

Though this is not an option right now, Sloan said that there is a bill on the governors that would make it possible.

Nevertheless, an undetermined number of Normandy students will start out the school year in the Francis Howell School District on August 6.

“The safety of our students is the number one priority of this district,” Sloan said. “Come August 6, we will do our best to educate and protect all of our students, no matter where they are from.”