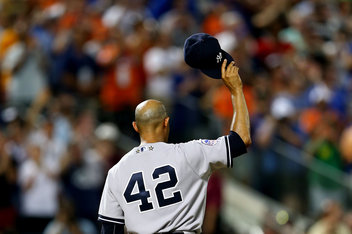 The game featured the league’s brightest stars, and the pitching staff of the AL shined the brightest.

Facing the NL’s top hitters, the AL pitching staff managed to keep the NL off the scoreboard and only allowed three hits in the contest.

The MVP of the game was a familiar face at what is commonly known as MLB’s “mid-summer classic”. Future Hall-of-Famer and New York Yankees closer, Mariano Rivera made what many believe was his final appearance in the contest. Rivera, a 13-time All-Star is set to retire at the conclusion of this year’s season.

Rivera strode onto Citi Field in Queens, New York from the bullpen to pitch the 8th inning of the contest to an astounding standing ovation from every person in the stadium.

Rivera tipped his hat to the crowd in an emotionally charged moment and then proceeded to retire the side in order en-route to being awarded the Ted Williams All-Star Game MVP award.

With the victory, the AL secures home-field advantage for this year’s World Series, a luxury they have not had in the past four seasons.

The players will have two days off before the second-half of the season begins on July 19.