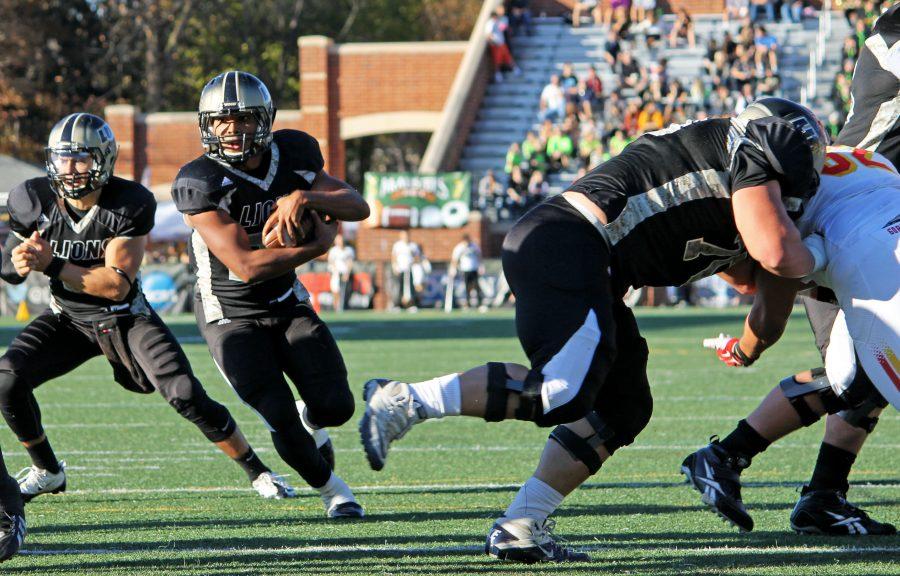 The game was a rematch of the 2012 upset that saw the Lions beat the defending NCAA Div. II national champions 44-33 in Pittsburg, Kan.

How the Lions would handle the well-balanced, high-powered offense of the Gorillas was the big question coming in.

In their first nine games, the Gorillas amassed over 4,500 yards of offense split almost evenly between the ground and the air.

The Gorillas got the scoring started early on, as they capitalized on a fumble by Dillon Miller inside the 25-yard line. Miller’s fumble came on just the second play of the game from scrimmage. Gorillas running back John Brown ran the ball in from five yards out to give Pittsburg State a 7-0 lead just four plays later.

The Lions second drive was not much better. Miller tried to stretch a downfield pass to sophomore Jaron Alexander, but was intercepted by a Gorillas defender.

The remainder of the first quarter the Lions offense continued to stall. Their best chance came on a first-and-goal, but the Lions failed to convert the fourth down opportunity.

The Gorillas offense saw success as they ran in another touchdown from 35 yards out. After adding a late field goal in the second quarter, the Gorillas led 17-0 heading to the half.

The onslaught started early on in the third quarter. With the Gorillas ahead by 24 midway through the quarter, quarterback Anthony Abenoja capitalized on another LU turnover. His one-yard touchdown rush pushed the score to 31-0.

After another Gorillas touchdown in the fourth quarter, the Lions had a few final drives to get on the board. They finally scored late in the quarter on a four yard pass from senior Ben Gomez to freshman Tyrian Taylor.

The 41-6 loss ends the Lions season, while Pittsburg State has one regular-season game remaining plus playoff hopes.