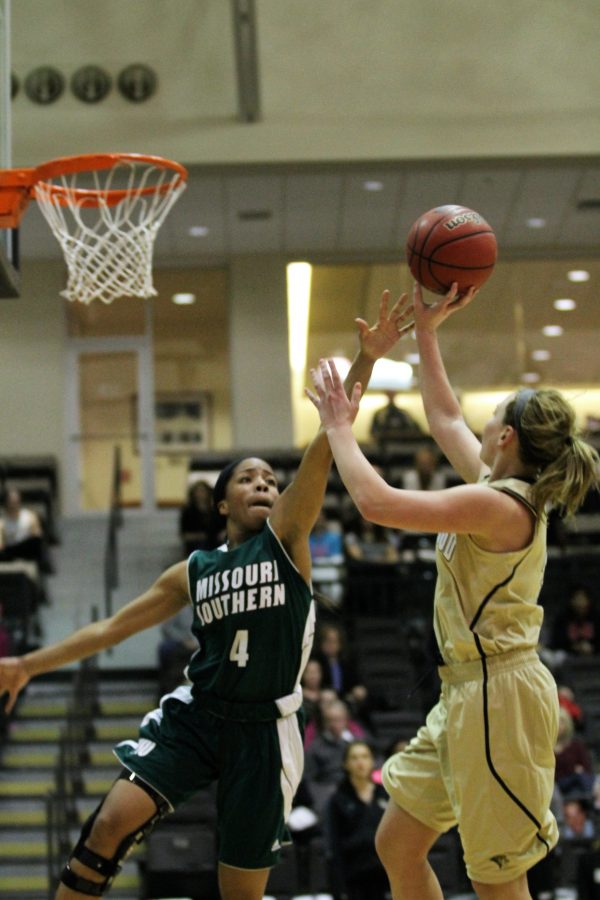 Junior Guard Morgan Johnson goes up for a shot against Missouri Southern defender during the Lions' 71-61 loss.

The Lindenwood women’s basketball team concluded its regular season schedule Thursday, February 27 against Missouri Southern State University at the Hyland Arena, losing 71-61.
The Lions entered the game on a two-game winning streak dating back to an overtime victory over Northwest Missouri State on Feb. 19.

The contest began as a back-and-forth affair as the two teams exchanged the lead four times, and tying the game on four other occasions in the first half.

LU was able to jump in front by six points at 18-12 midway through the half, as freshman guard Kassidy Gengenbacher was successful on a three-point attempt just past the ten-minute mark.
Missouri Southern was able to make a bit of scoring run as the half came to a close, however, as Lindenwood entered the half with a 29-26 lead.

After halftime, the Lions of Missouri Southern began to shoot the ball very well, taking a 36-35 lead five minutes into the second half, as guard Alexis Fitzpatrick knocked down a jumper near the basket.

From this point, Missouri Southern began to take control, pushing their lead up to nine points just minutes later as Fitzpatrick connected on a three-point field goal to put MSSU up 53-44.
LU was never able to get their deficit any lower than seven points, as Missouri Southern continued to shoot the ball well, winning the game by the score of 71-61.

Gengenbacher led all scorers with 26 points for the game, including four made three-point baskets and going a perfect 8-8 in free throw attempts.

The Lions enter the MIAA tournament with a home game against the University of Central Oklahoma, a team that they defeated at home earlier this season.

The game marks an important occasion for the program, as it is their first year of eligibility in the conference. The MIAA Tournament lasts a total of six days, culminating on March 9 in Kansas City, Mo.

All games other than the first round will also be played in Kansas City, with the Quarter-Finals and Semi-Finals on March 6 and March 8 respectively.

Missouri Western and Lincoln University missed out on this year’s tournament, while Central Missouri, Emporia State, Pittsburg State, and Missouri Southern have already clinched a spot in Kansas City.

The dismal 2012-2013 season only turned out a single win in the MIAA for the Lions, but the team has managed to defeat eight conference foes this season.  The Lindenwood Lions lost to Central Oklahoma 79-85 when they played on March 3 in the first round of the MIAA Tournament.