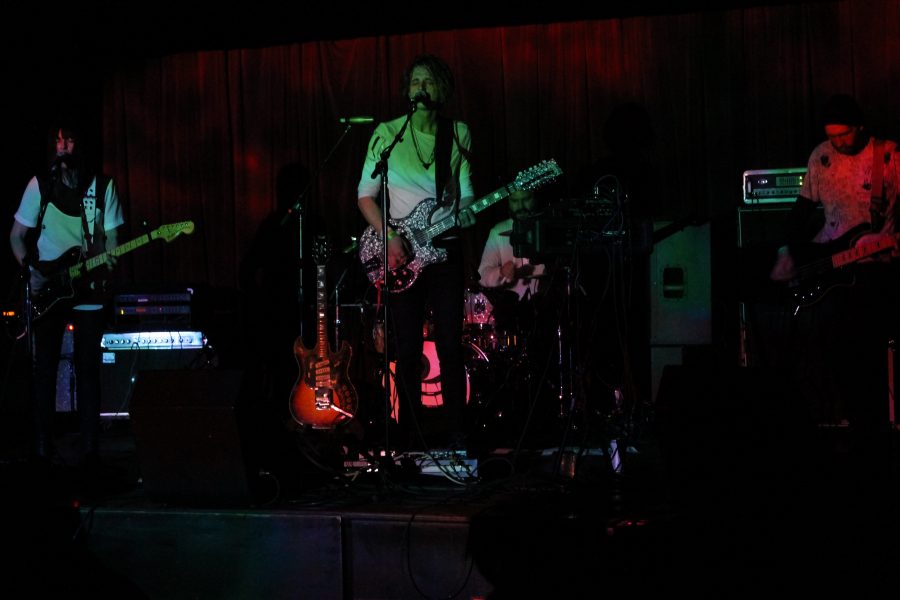 To most passersby, the small venue, located near the corner of Olive St. and N. Jefferson in the midst of downtown St. Louis, may have seemed to be having a rather quiet evening. On the contrary, the venue, named the Firebird, oddly located amongst a grouping of office buildings, was ebbing and flowing with the hustle and bustle of musicians chatting with friends and hauling their gear through the back doors. It was another night and another show for the local music hot-spot.

On the roster for Sunday’s performance were local band Versuch and Brooklyn, New York natives Dead Leaf Echo. Around 7:30 p.m.  Firebird employee peeked out the door to let those waiting know that they were free to come inside. About an hour later, Versuch took the stage.

Versuch began the night with a classic rock ‘n’ roll vibe. Having a retro sound and bluesy vocals, the group put on a polished set that was neither flashy nor boring. The band kept their words to a minimum and let the music speak for itself. The small but seemingly joyful audience applauded and cheered for the band throughout their set. The St. Louis musicians gave a satisfying start to an interesting evening.

Headlining the intimate show, Dead Leaf Echo took their first steps onto a Missouri stage. Despite the small number, the band seemed grateful for their new audience’s enthusiasm. A band used to more fierce and diverse competition had the small crowd’s full attention.

“The fans are usually very different in terms of attitude.  Brooklyn/NYC can have a much broader view of what they have seen and heard,” explained the band’s singer LG , “Smaller markets can be very fresh and sometimes can be more of a lag in between good touring acts thereby making it fresh to these audiences.”

Starting as an art project, Dead Leaf Echo took on a life of its own and became the unique touring act it is today. Even as the band set up the stage and sound checked, it was evident that the audience was in for an intriguing evening.

“It’s a bit of a large sound, slightly somnambulist; sparkling darkness with an edge of hope perhaps. Its music mixed with concept and also includes elements of visual art,” said LG on the band’s unique approach to music.

As the band began to play, they strummed their guitars, creating a sort of noisy ambience. Instead of traditional lighting, the band chose to use a projector that flashed different shapes, patterns and colors. The dark but still colorful lighting easily complimented the echoing guitars, erratic rhythms and misty vocals. With the combination of light and sound the band members background in visual arts and sound design came across clearly.

Prior to Sunday night’s show, Dead Leaf Echo released their latest EP titled “true.deep.sleeper.” For better or worse, the album was a product of a short burst of inspiration and is probably the group’s most musically dreamy work to date.

LG said that the album was inspired by “terrible sleep patterns and the depression that comes from sleeping your life away.”

For a band that began with almost no serious intentions, Dead Leaf Echo has come a long way to become the musical project it is now. Even after the group wraps up their current string of shows, they still have many hopes for the future.

“Putting out the latest album has been the easiest thus far in terms of creating, producing and now promoting.  So each year you learn more and more about how to do things,” said LG, “[I am] looking forward to making another record. I would also love to finally take this collective to Europe and make all new friends overseas.”

It seems the Dead Leaf Echo may have a bright future ahead of them. Even as the house lights came up and the band made their way off stage, fans old and maybe even new happily cheered and clapped for their performance, bringing another night of music to close at the Firebird.