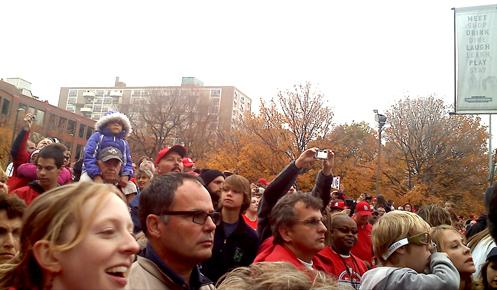 Kool and the Gang’s infamous song entitled, “Celebrate” was definitely an appropriate tune for Cardinal fans after the team’s shocking win of the 2011 World Series against the Texas Rangers.

Baseball fans around the nation certainly did not expect the “Red Birds” to enter the World Series, let alone win it. As they neared the end of their regular season with a record of 72-64, the chance of the Cardinals going into the World Series seemed virtually impossible; That is until they shocked the world by making, what is now known as one of the largest comebacks in MLB history (90-72) after playing all but thirty of their regular season games.

As if the regular season stats weren’t surprising enough, the Cardinals astonished the world again when the won the seventh and final game of the World Series, defeating the opposing Texas Rangers.

“Throughout the entire game, fans were going wild,” said Patt Kipp, who attended the final 2011 World Series game on Friday October 28th, “…but in the last few minutes of the game I couldn’t even hear myself think. The ‘sea of red’ had begun to roar like nothing I’ve ever heard. It was simply amazing.”

Like Kipp, many other Cardinal fans will never forget that night. From live bands and fireworks, to celebration parties and neighborhood cookouts, Cardinals fan celebrated in just about every form and fashion.

One of the more popular events was the parade that took place in downtown St. Louis two days after the World Series win. Fans came to show their pride and support in the Cardinals. The parade consisted of a float in which each Cardinal player and their families were featured.

“The parade was memorable to say the least,” says spectator Donna Nash, “My husband and I took tons of pictures as our favorite baseball time of all time rode by.”

Nash, and what is said to have been hundreds of thousands of other Red Bird fans, lined the streets of downtown St. Louis for honors in celebration of the World Series victory.

Fans continued to party into the wee hours of the morning, until the Cardinal’s manager, Tony LaRussa announced his plans to retire during a televised press conference on the morning of Monday October 31st. “I think that it feels like it’s time to end it,” said LaRussa.

The news came as a shock to baseball fans around the world. LaRussa’s hasty retirement, after 16 seasons and now, 3 World Series titles (1989, 2006, 2011) resulted in mixed reactions from the St. Louis public. “I think that it was probably a good idea that he ended his career on a good note,” says Cardinals fan Sadie Thompson, “After three World Series titles I think he deserves a break.”

Though many others agree that a World Series win was a good note to leave on, LaRussa insist that that is not his reason for retiring saying, “If we won, if we lost, it wasn’t going to change.”

Despite the news of LaRussa’s retirement, Cardinals fans still continue to celebrate the unlikely victory of the St. Louis team.