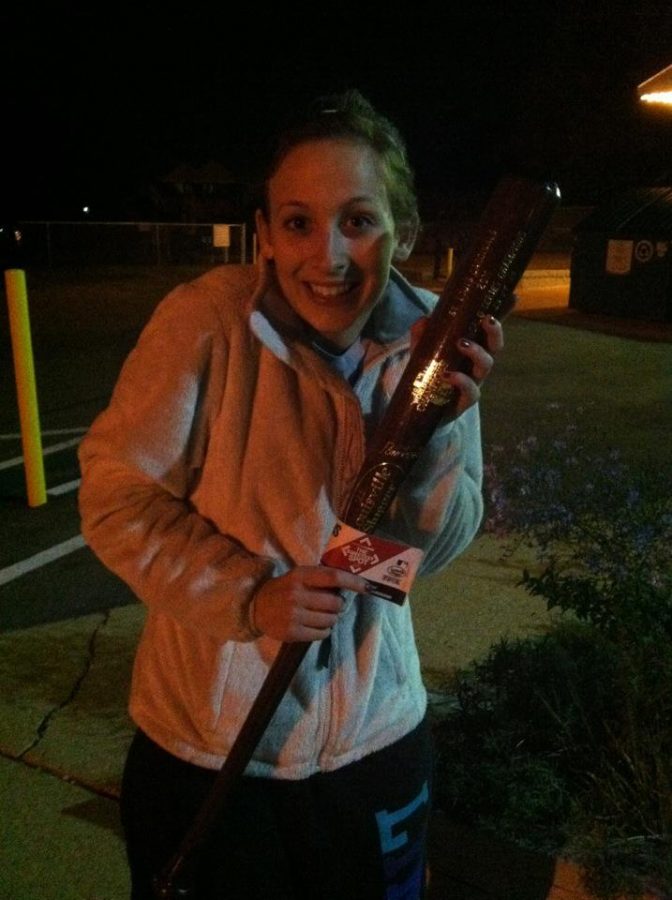 The only thing cooler than being at Game 7 of the World Series when the Cards beat the Rangers would be to personally get your hands on a rare piece of memorabilia. Freshman Cori Shockley did just that.

On Saturday, October 29, Louisville Slugger hid just 60 commemorative bats around the St. Louis area. Clues were posted through social media such as Facebook and Twitter. On Saturday morning, the chaos began as St. Louisans started the hunt to claim their own piece of history.

Beginning at 7 a.m., the search continued until all the bats were found. Shockley and her friends didn’t start the search until after 34 bats had been retrieved.

Senior Emiley Scott was with Shockley for all the fun. She commented on how, when they started the search, they thought they would be too late to find one.

“We thought it would go by really fast when we first heard about it,” Scott said, “but we decided to join in on the fun.”

From Jackson, MO, Shockley said that she has not always been a huge follower of the Cards, but since moving to the St. Louis area, she says, “I’ve become a baseball fan.”

After hitting up a few locations and being too late, the group heard about a spot that they thought they could get to. The clue said something about Lafayette High School. Upon arriving and finding no bats, the next clue told them that it would not actually be at the high school. It was then that Scott thought of the elementary school nearby. They jumped in the car and headed over to the school where people had already begun to gather.

“Mine was in the middle of the soccer field,” Shockley said. “You could see the shadow. I walked up grabbed it and screamed. I really didn’t think there would be any chance we would get one.”

Shockley explained that Scott was a much bigger Cardinals fan than she. However, Scott had broken her foot just weeks prior and was in a boot, unable to run to find the bat.

Scott said, “Of course in the 22 years I have been alive and never broken a bone, I break it now when I need to run. Of course!”

When asked what Shockley would do with her bat, she said, “I don’t really like to sell cool things. My dad and brothers want it, so I have to guard it. I will probably just keep it in my room for now and decorate my house with it one day.”