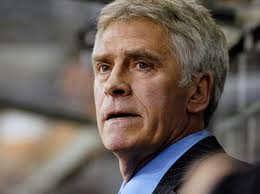 Sator was in practice this past week helping prepare the Lions for a pair of games, which the Lions won against Central States Collegiate Hockey League [CSCHL] conference opponent, the University of Ohio, this past weekend.

“It is the first time in all my years of coaching that I ever learned anything,” Zombo said. “One thing about a coach, you’re always trying to improve on a daily basis, and when you have somebody with the experience [he has], you can’t get any higher level than where he’s at, and the success where he’s at, you just keep your mouth shut and open your ears.”

Sator said he and his wife recently decided that the St. Louis area is where they wanted to settle down after moving back to the United States. He said he ran into Zombo at the Hardee’s Iceplex in Chesterfield, Mo. where we works with a youth hockey team, and the team from Lafayette High School [Mo.].

“I had heard about the Lindenwood program being the up and comers, and Rick [Zombo] asked me if I’d be interested in helping him out, and I said, ‘Absolutely.’” Sator said. “I coached Rick when he was a [St. Louis] Blue, and I have a lot of respect for him, not only as a player, but certainly what he does his job as the coach.”

Sator is one of Zombo’s three assistants, but he is the only person with the program, besides Zombo, who has NHL experience. Zombo said Sator has helped to make practices more efficient for everyone, and that he brings a level of experience to the program that is invaluable.

“[Sator] is very strict when it comes to speed and intensity at practice,” senior forward Niklas Bunnstedt said. “Also, the preparation for games, he likes us to step up during games, and play a faster game. But ever since he got on the team he has brought intensity.”

That intensity was likely developed during Sator’s two terms as an NHL head coach. He spent two seasons behind the bench with both the New York Rangers, and the Buffalo Sabres. The other eight years of his NHL coaching career was spent as an assistant coach with five different teams, including a two year period from 1993-95 spent coaching Zombo while both were members of the St. Louis Blues.

Sator said he hasn’t gotten behind the bench yet at Lindenwood, because that is Zombo’s space.

“I can tell you one thing,” Sator said. “As a patriot type of a coach, that nothing pleases a coach more, in any field, than to see his players go on, and become successful coaches as well. You know the players [which], have all the ingredients when you’re coaching them, those that are going to be good coaches, and those that probably won’t gravitate to their sport when they get done playing it.”

In addition to his NHL experience Sator also has been an assistant coach for U.S.A. hockey three different times, most recently during the 1996 World Championships.

His coaching has not been confined to the United States though. Overseas, Sator has coached with programs in four countries. He has been the head coach for two different eastern European national teams, and also coached Elite League hockey as well.

“The first time when he spoke Swedish with me I was like stunned,” Bunnstedt said. “I had no clue that he knew Swedish. On the ice, when we speak Swedish it is nice to have someone to really explain to you what to do.”

The hiring of Sator makes Lindenwood the CSCHL program with the most NHL ties. Zombo said when recruiting they first show students the benefits of Lindenwood, and the American Collegiate Hockey Association, but it is possible the background of the Lions coaching staff could have a lot of appeal to young recruits both nationally, and internationally.

“Being an athlete, there is no better coach in the city, or in the league then what they have here at Lindenwood,” Zombo said.