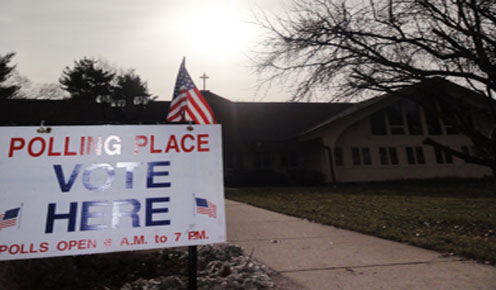 Buildings that are conventional places to pray, worship and circulate information through mail were turned into places to deposit an opinion. Properties that were once filled with numerous residents going in and out of the doors became scarce for a once in every four-year event.

Tuesday’s Missouri Primary had an unexpected turn-out as very few residents of St. Charles County placed their votes at different churches and post offices for a somewhat “meaningless” election.

There was one reason for this empty election.

“It’s a waste of money,” said Tina Boyle, resident of St. Charles, who voted at Good Shepard Church. “They need to change the laws. Everyone has the right to put their opinion in no matter what and have it count.”

This primary election did not count for the Republicans while it did count for the Democrats, who are re-nominating President Obama.

“Why would anyone run against Obama?” said George Harper, retired resident of St. Charles, who voted at Good Shepard Church. “Therefore this election, which supposedly counts for the Democrats, is a waste.”

According to voting supervisor Kevin Knerr at Good Shepard Church, the expected attendance for the election was about 30 percent of the registered voters in Missouri. Channel 4 News stated the final number at the end of the day was 10 percent.

After 30 minutes, a LindenLink reporter saw three people walk into Trinity Episcopal Church in St. Charles, while two people walked out of a different voting place, the Legion Post Office.

The polls opened at 6 a.m. and continued until 7 p.m. Registered voters were admitted inside while unregistered voters could only stand outside of the building. LindenLink reporters were asked to stand 25 feet away from the doors due to the law that states that there must not be “undue influence.”