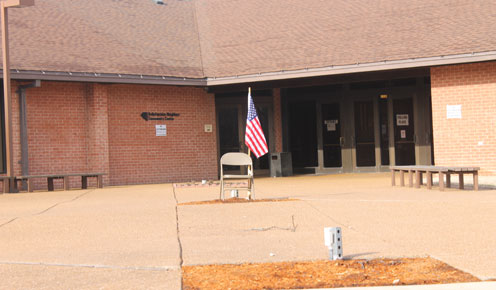 The poll stations for the Missouri Primary were eerily quiet on Tuesday morning. In St. Louis County, American flags waved in the wind outside the 450 voting stations, yet few voters could be seen walking in or out.

“There just hasn’t been enough interest,” said a poll worker in Spanish Lake who wished to remain anonymous. “I suppose people just haven’t decided who they want to vote for yet.”

A reason for the low turnout could have been that the vote will not officially count for Republicans. Missouri’s choice for a Republican candidate will not be made until the caucus on March 17. Though the Democrat vote will count in the primary, voting for Democrats was also low. The incumbent, President Obama, is running for a second term with little opposition.

Laura Austin, 46, an Independent in Spanish Lake, voted in the primary and plans to vote in the caucus. However, she disagrees with Missouri’s decision to hold both.

“I don’t like it. I think it should just be the primary,” she said. “I think it puts more of a burden on the state, having to pay twice.”

Missouri officials have estimated the cost of the primary to be around $7 million. This does not include money for the caucus.

Andreah Gettinger, 27, of Hazelwood said that the primary was not worth it “money-wise,” but she felt it served a purpose for the candidates in the overall political process.

“It gives people a chance to get their name out there,” she said.

Despite the controversy over the system, both Democrats and Republicans came to cast their ballots.

“I’m not the kind of person to sit back and say, ‘Oh, it should have been,’” said Vivian Ward, a retiree from Spanish Lake who voted at Bethany Church.

She cast her vote for Obama. “If you don’t come out to vote, the person who you want to get in won’t get in.”

Poll workers spent the day signing in the people who did come in to participate in the political process. Many workers shifts ran from 5 a.m. to 8 p.m.

“I get up at 3:30 and when I get home, I drop like a fly,” said the Spanish Lake poll worker quoted previously.

She said she has been working the polls since October of 2004 when her husband told her the county was looking for more workers.

State taxes pay the salaries of the workers whose compensation ranges from $100-$130 per day (plus $30 to $65 for attending a training course prior to election.)

“We don’t do it for the pay,” said the poll worker. “I do this as a civic duty for my community.”

She said the low turnout was disappointing.

“It’s taxpayer money to pay for this election,” she said. “If people don’t vote, it is a waste of money.”