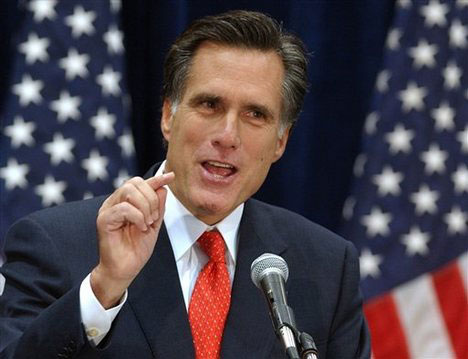 Despite the Republican primary being declared non-binding in Missouri, Republicans around North St. Louis County went out on Tuesday, filing through schools and civic centers to submit their vote. For some, it was to show committed support to their favorite candidates. For others, they were simply exercising their patriotic freedom.

Republican Curtis Austin, together with his wife, Laura Austin, an Independent, rode all the way to Larimore Elementary to cast their vote. Curtis is in strong favor of Mitt Romney. He said he does not support President Obama. “Romney’s a lot better than Obama,” Austin said. “Obama is turning this country over.”

Loretta Becker decided to cast her vote at the Jamestown Bluff Library. She is also a strong Romney supporter. “I’ve been watching the debates, and he’s convinced me that he’s the best person for the job. He’s the one that I see as the most promising.”

Becker was not happy that her vote would technically not be counted at the primary. “It’s a dumb idea to vote and be doing it almost for nothing, but I came out to be doing it.”

However, Becker prefers that Missouri stick to a primary instead of a caucus because “with a primary, you have more of a cross-section of people. More people come out, and more people feel they have a choice.”

George Goldman came to the St. Louis County Lewis and Clark Branch Library to cast a vote for Romney, even though his real choice was Newt Gingrich, who decided not to file for the Missouri primary. “They didn’t have the full vote and I don’t like Ron Paul,” Goldman explained on why he voted for Romney on the ballot.

Goldman supports Gingrich because to Goldman, “Gingrich’s already got all his trash out in the open. He knows that Washington is a mess, and he’s going to fix it.”

However, Goldman’s true reason to why he wanted to go out and vote in the primary was because, “I’m an American. It’s my duty to vote.”

Hazelwood teacher and President/Executive Director of the International Teachers Hall of Fame, Shehzad Khan, is a declared Republican. However, rather than choosing a Republican ballot, he decided this year to go with a Democratic ballot to vote for Obama at the Hazelwood Civic Center East.

He said, “Everybody else on the Republican side either don’t have the credibility to show or they don’t have the integrity. Obama is the best choice for me. I chose the Democratic ballot because we have that choice.”

Khan is not happy with the way the primary is set up this year. “I think the primary is based off of money. We should be saving for something better like health care.”

He does support the primary, but wishes the primary would be restructured to better fit a true election process. “If the candidates are running and they’re paying for it, I say, yeah, we should have the primary. It gives you the opportunity to express your opinion.”

Khan wishes that all candidates across the board would focus on important matters in their campaigns such as the economy and job creation. “The economy would be the big thing to focus on,” Khan said.