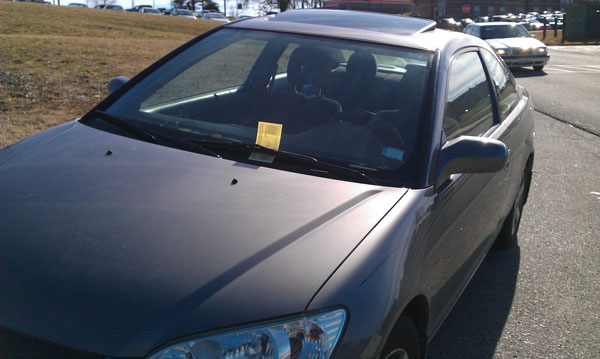 A stuent's car parked illegally outside of the Spellmann Center has a yellow ticket for the violation. Courtesy photo by Chandra Wood.

Students who park illegally may find a slip of paper under their windshield when they get out of class. Security patrols the campus daily to make sure students respect the parking rules.

Just like on public roads, students are prohibited from parking on a yellow curb and in places that will block traffic. Director of Security Kurt Smith said that most tickets come from students parking in spaces reserved for commuter students and faculty in the Roemer and Young lots. Both have signs designating them as non-residential parking.

“People get in a hurry. They’re late for class. They park in one of those spots, and they get ticketed,” Smith said.

Students have three business days to pay a ticket at the business office in Roemer before it gets added to their ledger.  “The problem is, some people get multiple tickets and don’t take care of them. Then they come to me at the end of the year wondering why they have an $800 bill on their account,” Smith said.

Not having a parking pass is another common violation. Students can register their vehicles at the security office and obtain a sticker to display on their back windshield for $4, allowing them to park on campus for the school year. It’s a small fee compared to the parking passes at UMSL, which can cost up to $500 a year.

Senior Joe Bayne got a parking ticket for not having a parking pass.
“I went three years without one, but I think they’ve been increasing security lately,” he said. “I didn’t think they could ticket me if they didn’t know who I was.” He was ticketed the next day for the same penalty because he hadn’t gotten a pass yet.

“We’re not doing this to make money for the university,” Smith said. “We’re just trying to keep violators from parking where they’re not supposed to.”
In addition to fines, security can use more extreme measures to get students to follow the rules.

“If we issue a ticket and see the same car in violation the next day, we put a boot on their car, and they have to see me the same day to purchase a parking pass and we’ll get the boot off,” Smith said.

There are a few lots available to students who don’t want to purchase a parking pass. The Scheidegger lot, the lot across from the Spirit Shop and the church parking lot behind Harmon are all available, no sticker required.