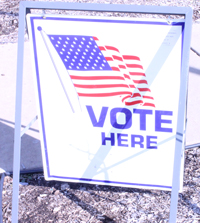 A variety of young people and senior citizens arrived early at the St. Louis Julius Davis Library, in the inner city St. Louis, but some were not aware of the primary election.

“I don’t know about this primary election because it was not advertised enough in the media or in this neighborhood,” said Heather Dunkin.

Other citizens argued that they would not vote because the primary election was not necessary and a waste of tax payers money.

“This is irrelevant. Over seven million dollars is spent on this election, and for what? This election is a way for the government to control us and make us feel like we have to do something, but this election does not count,” said Sonya King.

Although the results to the primary election will not count for the Republican others still cast their votes.

“I’m still going to vote. I vote every election and nothing will stop me from voting,” said Avis McGee.

Diane Clinton added, “The primary election is always important because it shows us which way to go. In life we all get to a point where something may seem unnecessary but it leads us somewhere.”

Some of the elderly people who voted were disappointed about the low turnout.

“Our forefathers have done too much for this country! I don’t understand why people are not here today! Every day, I hear people complaining about the government or the economy, well today is a good day to promote change! Get out and vote!” said Debra Jones.

Other elderly voters complained about the lack of young people participating in the election.

“Where are the young voters? Soon all of us elderly people will be dead and the young people need to take action now about what is going on in this country,” said Michael Stamps.

A mixture of emotions filled the minds of the voters, but a few were more concerned with the Republican presidential candidates.

“I will not vote for any of the Republican candidates. They are all rich and powerful. What makes you think that rich men are going to be concerned about the poor environment, like the St. Louis city area?” said Lakeesha Sims.