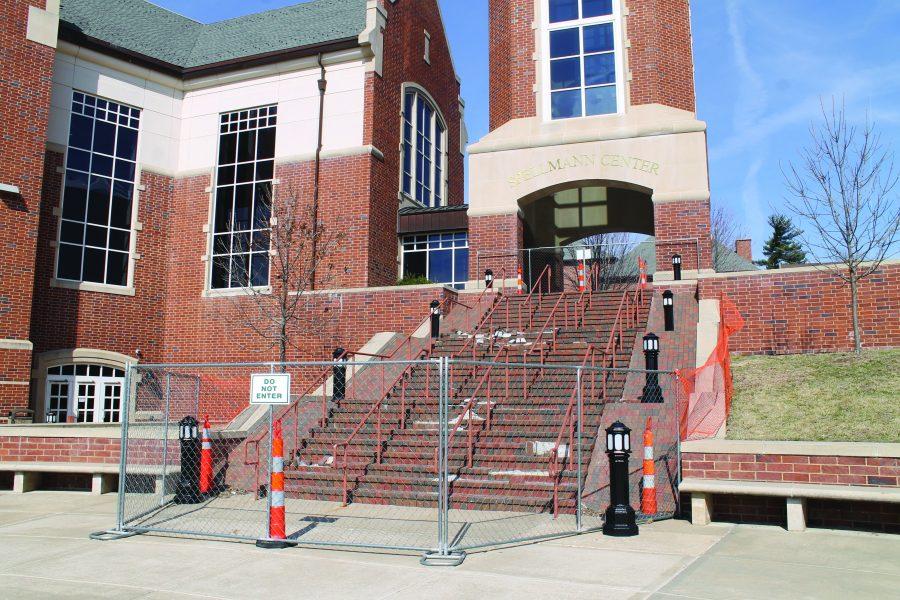 The fence was constructed Feb. 21 to prevent injury to students and faculty climbing the Spellmann Center brick staircase. Photo by Jennifer Bruhm

The crumbling stairs of the Spellmann Center, blocked off on Feb. 21, could remain off-limits until the end of summer.
“The money decides,” said Greg Scaturro, maintenance for the Spellmann Center.
Before Scaturro closed up the stairs with the fence, he said he glued back some broken bricks and posted caution tape, leaving an open section. Students tore down the caution tape and ran through, stepping on the recently repaired bricks.After multiple attempts to repair the bricks, Scaturro said he decided to close off the whole staircase with the fence because it was too dangerous for everyone to keep climbing the stairs before they were dry.

Scaturro said the stairs will be repaired by the end of the summer. “We got three contractors to come out and look at the broken stairs,” he said. “The contractors would replace the bricks with a concrete or some other hard surface to keep this from happening again.”

In the meantime, students and faculty now pass through the Spellmann Center or walk around on another sidewalk in order to go to the upper level.

Sophomore Jinsel Kim complained, “It must be inconvenient for those people who are coming from new dorms or Evans Commons when the lower level doors of Spellmann Center are locked.” She said she usually goes upstairs by taking the stairs in front of Harlen C. Hunter Stadium or by walking the way that is near to Blanton Hall. She said, “It needs to be fixed as soon as possible because it is very dark to walk alone at night behind the Spellmann Center.”

The combination of heavy traffic and unusual weather conditions led to the upturning of bricks. “This winter has been the hardest on the bricks due to the cold temperature, snow and ice that has sat on them, which helped to make the matter worse,” said Campus Facilities Director Joyce Norman. “It has not been this cold, 10 below, since this building was built.”
“I have lived in the St. Louis area for over 40 years and I have never seen a winter with this combination of extreme cold and a lot of snow,” said Vice President for Student Development John Oldani. “I have seen winters that are cold, I have seen winters with a lot of snow, but the combination is extreme for this area and that has had an affect not only on people but also facilities.”
According to Scaturro, fixing the stairs is in the process. For more information, contact Norman at 636 949-4922 or [email protected] and ask to speak to Scaturro.