Santorum caps off night with speech 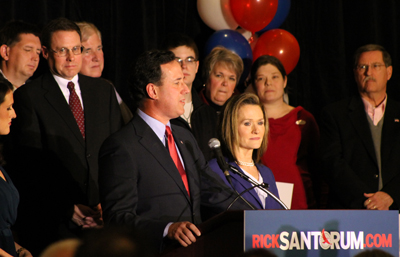 It was a huge night for Rick Santorum.
On Tuesday, the former senator from Pennsylvania won voting in three states: Colorado, Minnesota, and Missouri.

celebration get together at the St. Charles Convention Center in St. Charles, MO. At about 9:40 p.m. Santorum came up to cheers to deliver a 14-minute speech on his victories in Missouri and Minnesota. Colorado was still counting its votes when Santorum spoke. Even though the Missouri win was non-binding, he and the crowd treated it like an official win. “Conservatism is alive and well in Missouri and in Minnesota,” Santorum said to begin the speech. “Tonight was a victory for the voices of our party.”

After thanking a few people, he began to get into the heart of his speech.

“There is probably another person who is maybe listening here tonight also, and that might be at 1600 Pennsylvania Avenue,” Santorum said as began his assault on President Barack Obama. “Why would you think he would be listening now, has he ever listened to you?” Santorum said to no’s by the crowd. “Because he thinks he knows better. He thinks he is smarter than you. He thinks he is someone who is a privileged person.”

Santorum continued his attacks, and chants of “We picked Rick” echoed throughout the audience. Santorum ended with this, “We are not done with you here in Missouri, you got a caucus coming up. Your honor, America’s honor is at stake.”

Santorum then came out from behind the podium, greeted the people, and left.