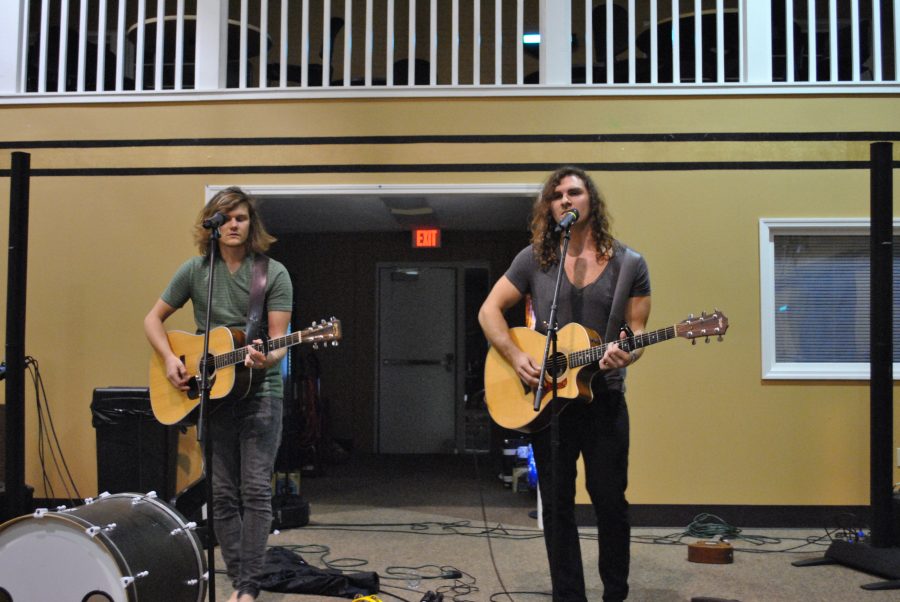 A relaxing night after the craziness of midterms was found when Equal Squeeze, returning for their second performance at Lindenwood, and a first-time performance from The Icarus Account was held in Butler Loft on Tuesday, March 18.

With refreshments offered, the mellow sounds of songs such as Equal Squeeze’s “Get Away” and their cover of Dashboard Confessional’s “Hands Down” floated through the rafters. With an obvious excitement, Equal Squeeze lead vocalist Trey Garrison said, “We absolutely love Lindenwood and it was an awesome show.”

Equal Squeeze opened for Mayday Parade and The Maine at LU’s 2012 Homecoming concert. Garrison stated that last week’s acoustic show was more intimate and personal than the homecoming performance, but both were extremely fun and they will absolutely consider coming back for another performance.

“Equal squeeze is a great bunch of guys with great attitudes,” said Junior Devin Durbin. “I loved seeing them on campus again.”

Equal Squeeze was in the studio this past weekend and will be going back in a few weeks to record more for their upcoming EP. The band is also hoping to be chosen to play at this year’s Warped Tour.

Twins Ty and Trey Turner, of The Icarus Account, followed Equal Squeeze using acoustic guitars, shakers, a tambourine and, briefly, a ukulele. Throughout their set, the brothers told anecdotes, joked with each other and interacted with the audience. The Icarus Account dedicated the song “Favorite Girl” to audience member Nathan Taylor, accidently calling him Daniel.“I love Icarus Account even if they cannot get my name right,” said Taylor, laughing.

The Icarus Account finds inspiration in everything, especially love, life, music and movies, according to Trey Turner. “We take that feeling inside, abnormal stirring feeling and try to replicate that into a song,” said Turner.

While playing many of their own songs, they also included covers such as “Burn” by Usher and “Iris” by The Goo Goo Dolls. They hope to release their next EP in April or May.

The seemingly carefree and personal emotions listeners may feel when listening to the music was a sound some had never experienced before.“I really loved the music,” said attendee Hannah Padilla. “I have never heard of them before, but I would definitely buy their music.”

Both bands were laid back guys who really appreciated the support from Lindenwood. “We were pleasantly surprised with the amount of people who showed up and it was exciting to see how many people, especially international students, who knew our music,” said Ty Turner. This sentiment was echoed by Equal Squeeze members.