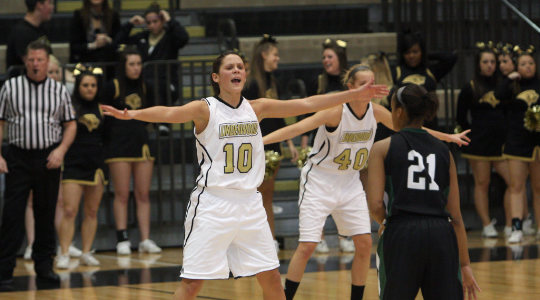 Sophomore forward Caroline Bourlioux has averaged more than 11 points and rebounds per game this season for the Lady Lions. Photo Courtesy of Don Adams Jr.

There have been a lot of changes for the Lady Lions basketball program over the past year. With two games remaining this season, the team now knows there will be at least one common thread between last year and the current one: a winning record.Lindenwood went six-and-two during January averaging 75.8 points per game during each of its wins. Their average margin of victory during that same stretch was more than 16 points.

“We try to be a tough team to scout,” head coach Tony Francis said. “The majority of our offense is basically a motion offense. Four out, one in, and it is a very hard offense to teach because you’ve got to put all your players on the same page.”

As of Feb. 9, Lindenwood had played 14 separate NCAA- member schools. Lindenwood was a game below .500 during those games, finishing with a record of 7-8.

Sophomore forward Caroline Bourlioux said while four games still remain on thisseason’s schedule, including two against NCAA Div. II opponents, the team has begun mentally preparing for what the Mid-American Intercollegiate Athletic Association [MIAA]will have to offer next year.

As of Feb. 15, Lindenwood’s current statistics would rank them in the bottom half of this year’s MIAA in most offensive categories.Lindenwood had a season average of 69 points per game through the first half of February. That number would have made them the eighth best scoring offense in the MIAA.

They would have ranked 11th in free throw shooting with a percentage of 65.7 percent. The only team in the MIAA with a lower mark is Lincoln University [Mo.] who Lindenwood lost to in the season’s opening game.

The Lady Lions hit 32.6 percent of the three-pointers they took, which would be the seventh best percentage in the conference.

Bourlioux said the team is growing closer, and that she expects them to be ready to compete in the conference next season.

“I think individually, we have what we need,” Bourlioux said. “We just need to be stronger, because I know me and some of the team are too soft, and we need to get stronger and work on that. Get lower on defense too, because if they are faster and we don’t get low, they are going to beat us all the time.”

There are some categories in which LU would rank in the top half of this year’s MIAA, including field goal percentage. Lindenwood’s 43 percent mark would give them a better overall shooting percentage than eight teams in the league. LU would also be fifth in steals, averaging 8.4 per game.

Francis said his goal is to be the premier women’s basketball team in the St. Louis area. He also said the team will take a three week break after the season ends Feb. 28, but then they will start preparing for next fall.

“I had very high expectations for this team, and to be quite honest with you, what we have done so far is right on par with what I expected,” Francis said.