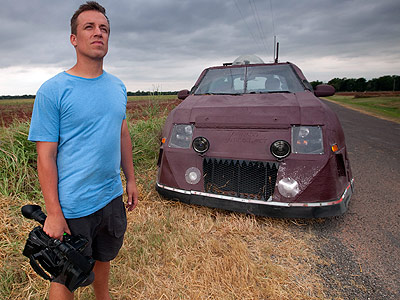 Extreme storm chaser Reed Timmer blew into the Scheidegger center on Sibley Day to tell unheard personal stories of the most extreme storms within the U.S.

Chairs in the Family Theater started filling up 45 minutes before Timmer’s presentation, with people anticipating to hear all about one of the most dangerous and breath-taking occupations out there.

“It really shows how beautiful tornadoes can be,” explained Timmer.

Timmer first realized he wanted to be a meteorologist at eight years old when he ventured out into the world of storms.

“Reed used to watch storms with the question of how it happened,” said Timmer’s introduction.

Ten years later, Timmer enrolled in the University of Oklahoma, where he has earned his degree in meteorology.

While getting an education, Timmer became the team leader for the Discovery Channel show, “When Nature Strikes”.

“We live for being within 200 yards of tornadoes,” Timmer emphasized.

Timmer’s team uses special cars called “Dominators” that keep the tornadoes from lifting the team into the air.

“One time, we did start going up,” Timmer said. “That’s when they realized we needed an upgrade.”

The 2011 Dominator 2 was designed with a stronger force to stay on the ground.

Videos during Timmer’s presentation showed just how scary their job can be.

Voices screamed in the background, “Keep going!” as displays of dark skies and tubular clouds covered the atmosphere.

“What you see is exactly what happened,” Timmer stated.

Footage of team members running back and forth in front of the tornado shocked the crowd.

“Adrenaline causes you to sprint in random directions,” Timmer explained.

Dixie Alley (Arkansas-Georgia) is where most of the tornado action is at. Some of the deadliest places in America, the cities of Hackleburg and Tuscaloosa, have tornadoes that occur during the months of April, May, and June.

“It was awesome to see what it’s really like up close,” said junior Clarissa Johnston. “He was so enthusiastic and had descriptions that only someone that was there could come up with.”