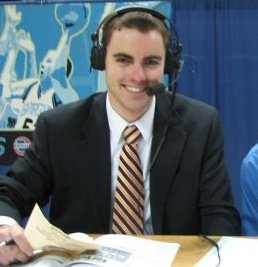 As most of the students majoring in mass communications know, Lindenwood has a very strong communications program.  The classes allow students to experiment with what works while also becoming versatile employees.
John Walsh was able to use these skills in order to enter a high-profile local contest.

A 2009 graduate of LU, Walsh majored in mass communications with an emphasis in TV and radio broadcasting.  He was a finalist for the KMOX Spring Training Correspondent Contest.

KMOX partnered with LU to send a correspondent down to Florida to cover the St. Louis Cardinals Spring Training.  Walsh first heard about the contest via Facebook. “It popped up on my news feed and I thought ‘Oh, that’s something’,” he said.  “Then I received emails and messages from people saying, ‘You need to do this!’”

Walsh then made his way over to J. Buck’s restaurant in Clayton to apply.  “You went there, signed a couple of forms, and they gave you a script,” he said.

Applicants were given as much time as they needed to look over the script before stepping in front of the microphone to record their audition.  Despite being a little overwhelmed, Walsh felt fairly confident.

“It kind of was [high pressure],” he said.  “The good thing about going to Lindenwood is that I had the training to do it.  I was prepared and felt very confident in what I was doing because of the training with Mike Wall and the rest of the communications department.”

Out of 200 contestants, Walsh made it to the Top 10.  Even though he achieved this feat, he did not win the contest.  The decision was announced on Feb. 22.

“They chose someone else, but it was a lot of fun to do it,” he said.  “It was a great experience because it put to use the stuff I had spent so long working on over the years in college.”

Just because Walsh didn’t win the contest doesn’t mean that he’s given up hope.  He remains optimistic that someone will take notice of his involvement in the contest.

“I thought this could be something that opened some doors for me, so I took a chance on it and did it,” he said.  “It didn’t turn out the way I wanted, but it was still a great opportunity.”