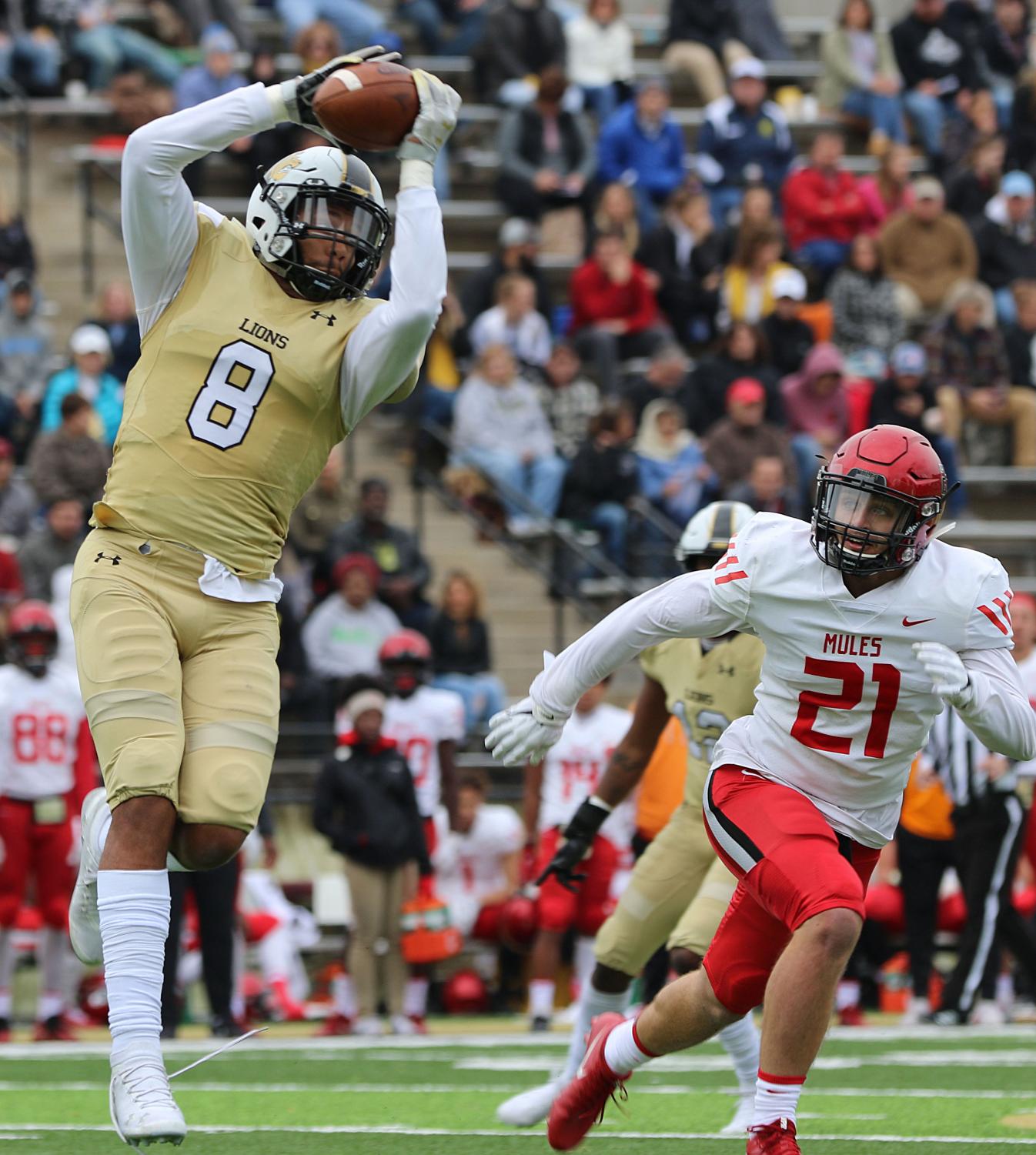 Henneman makes one of his 109 career receptions. The catch came against the University of Central Missouri on Nov. 3, 2018. (Photo by Kayla Drake )

Henneman makes one of his 109 career receptions. The catch came against the University of Central Missouri on Nov. 3, 2018.

Reaching for the pros

Journey to the Highest Level: Erik Henneman's road to becoming an NFL prospect

With numerous highlights, accolades and school records to his name, Erik Henneman has become one of the best tight ends in all of Division II football.

But his path wasn’t always a straightforward one, and football wasn’t the original goal.

“I was mostly concentrated on basketball,” Henneman said. “My whole high school career, I always wanted to play basketball. Basketball was my first true love.”

This ambition began when Henneman was cut from his seventh-grade football team. The coaches would bring him back onto the team a week later due to a player suffering an injury. Despite playing football from the age of seven to 12 in his native state of Louisiana, Henneman’s vision for himself was to be on the court instead, playing basketball at both the high school and collegiate level.

The lone sport Henneman played freshman and sophomore year of high school was basketball, and he played all over the court. Some games he played down low as center, others he played as a guard.

After spending those two years without pads and a helmet on, a close friend and teammate, Jamon Brown, pushed and encouraged him to return to the football field. Brown had played football with Henneman since middle school.

“I told Erik and other basketball players ‘what do you all have to lose’,” Brown said. “And told Erik he had a better chance than the rest.”

Brown believed that Henneman had a better chance because of his play-making ability, with his massive hands and long reach.

Brown started playing football with Henneman around the age of 12 on a team that ran a two-tight end and three running back set with no wide receivers. Brown played as the quarterback while Henneman was one of the two tight ends. Even then, the primary target for the quarterback was Henneman and his large hands.

“I always wanted to throw to Erik,” Brown said. “Because every time I threw to him, I knew that he would catch it.”

Brown wouldn’t be the last quarterback to have this mindset.

Junior year, Henneman immediately entered as a tight end starter. He made the move to a hybrid tight end (receiving and blocking traits) the following year, which led to a breakout season for Henneman in his senior year. He was named an All-State and All-District tight end in 2011, catching 10 touchdowns in his last season of high school.

Despite having a strong senior campaign, Henneman didn’t receive the attention that he had wanted out of high school. He didn’t receive any scholarship offers and declined a walk-on offer at Southern Mississippi. But even with the lack of attention, Henneman refused to allow this to discourage him and the goals he had set for himself.

“I knew that the things I could do were just natural, I could just hop out of bed and do it,” Henneman said.

He went back home to Delgado Community College in New Orleans after high school and was enrolled there full-time from 2012-13. This officially started the clock of eligibility for Henneman, so he returned to the game of football in 2014, when he moved to Santa Monica College in California, with Brown helping him get into this school over on the west coast.

A year later, some of his coaches at Santa Monica made the move to El Camino College, in the Southern California Football Association, bringing Henneman and a few other stand-out players with them. At a school that had a higher quality of facilities and was more strongly equipped for football, Henneman thrived once again. He finished the season as first team all-conference and put himself on the map across Division II schools in the United States. Getting the chance to be a recruit at an older age was a beneficial experience for Henneman, who didn’t get that opportunity as a senior in high school.

“Going through the recruitment process older was cool for me because I got a chance to sift through the weeds of the people trying to sell you your dream,” Henneman said. “It was better because you get to see through things, I got to see through a lot of the blurred lines.”

At the end of his recruitment, Henneman had to choose between two different Division II programs: Central Washington and Lindenwood University. After visiting both, he ended up being swayed to Lindenwood as he felt a “family-loving” environment and liked the time he spent with the Lions’ coaches, including head coach Jed Stugart.

Both Henneman and Stugart have strong Christian faith, allowing them to connect on a personal level that went well-beyond football. But for Stugart, he had already been impressed by Henneman before they met during his visit to the school.

“He really stuck out to us,” Stugart said. “As we got to know his story, obviously he was a good player, but we started realizing that he was going to be a really good fit for our team.”

After being forced to redshirt due to academics, Henneman spent his first year with Lindenwood on the practice squad in 2017, facing adversity yet again after another setback. But with a determined mindset, he recalled a story where he went to former Lion teammate Ace Rogers’ house and in his bathroom, Henneman saw multiple post-its notes up on the walls with goals on them. This inspired him to create goals for himself and to stick to them no matter the hurdles he would have to overcome.

He overcame his academic hurdles the following year, getting back on the field and leading the Lions in receptions (57), yards (639), and touchdowns (nine). This led to numerous accolades for the then-junior tight end, including first team All-MIAA and All-American.

When coach Stugart told me that I made All-American, I definitely shed a tear.  I put in a lot of work, and I stayed down until I ate the fruits of my labor”

“When coach Stugart told me that I made All-American, I definitely shed a tear,” Henneman said. “I put in a lot of work, and I stayed down until I ate the fruits of my labor.”

Now in his senior year, Henneman is enjoying another strong season as one of the team’s captains, with 52 receptions, 573 yards, eight touchdowns, and a successful year as a team, winning the Great Lakes Valley Conference title in Lindenwood’s first year in the conference. Sophomore quarterback Cade Brister has gotten to throw to Henneman over the past two years and recognizes Henneman’s importance to the team’s game.

“Erik is a different type of player,” Brister said. “He can do anything asked and more. I look up to him a lot because of his leadership qualities as well. Obviously everyone sees the crazy catches he makes, but his ability to block, especially downfield, has electrified our offense this year.”

On the field, it isn’t just the numbers that stand-out to coach Stugart, but also the steps Henneman has taken in becoming a leader among his fellow Lions.

“He’s become a very vocal leader as a captain that is also very positive,” Stugart said. “If we’re not having a great practice, he’s very encouraging in keeping his teammates going.”

Off the field, Henneman showed his true character as well. His senior year of high school, Henneman’s friend, Brown, injured his hand and had to get a cast. Brown’s injury hampered his everyday activities, including putting his pads on for football. Henneman made a point to help Brown put his pads on before practice.

“He’s so humble,” Brown said. “He never gave up on his dreams, and always stayed focused. He’s gone through a lot, and didn’t get the easy route.”

On and off the field, Henneman helps the younger players on Lindenwood in terms of preparing for games and shaping their mentality.

“Erik does a great job of talking about a winning attitude and makes sure the people around him reflect that,” Brister said.

With his ability on the field and his character off of it, Henneman has earned the respect of those around him and national recognition that could lead to him taking the next step in his career: the NFL.

Lindenwood has already produced multiple players that have reached the NFL, including the likes of Pierre Desir and Jon Harris. Henneman is hoping to be the next name from Lindenwood to be on this list.

“If you stay down and stick to your morals and ethics, good things will come, and that’s what happened with them,” Henneman said.

Stugart also believes that Henneman has a shot at playing at football’s highest level.

“There’s a lot of offensive schemes Erik fits into, and there’s a number of teams that see him fitting into what they do,” Stugart said.

Once his senior season at Lindenwood concludes, Henneman hopes to sign with an agency that can open more doors for him. He will then look for a place to train at for the next four to five months up until the NFL draft. He also has a desire to bring a Pro Day to Lindenwood for the first time, to bring exposure to both Lions players and coaches with the football team.

Henneman has the support of those from back home in his pursuit of reaching the next level, including his life-long friend Brown.

“He can really catch, has a large catch radius, and can spread out anywhere as a receiver,” Brown said. “I think he has a great chance at playing at the next level.”

A journey that started in Louisiana led Henneman to travel all across the nation and end up in St. Charles. While it may have been rocky, Erik Henneman has earned himself a spot among the top potential NFL draft prospects in all of Division II football.

“It would be a true testament of going through every trial and tribulation that you can think of, but never really doubting yourself,” Henneman said. “I’ve experienced all the emotions through my journey, but I never doubted myself or God.”